Divide and Conquer: The Story of Roger Ailes, A Film Review by Marc Glassman 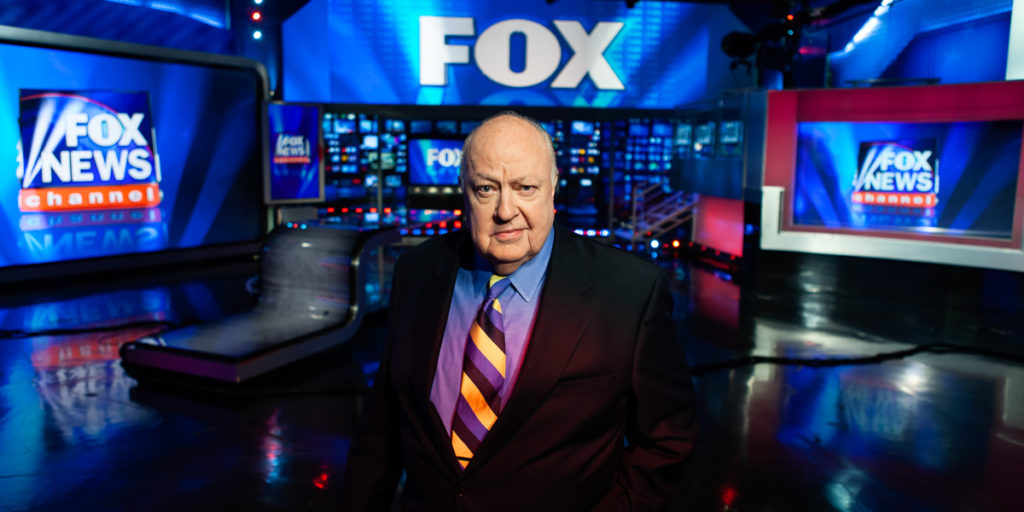 One of the key factors behind America being taken over by the extreme right wing of the Republican Party is due to a coherent media campaign that has targeted liberals, big city dwellers, and intellectuals as demons bent on destroying the traditional values that have made the United States “great.” The architect of that media strategy was Roger Ailes, a small town Ohioan, who wanted to create a “G.O.P.  TV station” as early as the Seventies and eventually organized and orchestrated Fox News for Rupert Murdoch, but more importantly, for a large section of the American public willing to vilify anyone else—Jew, Muslim, liberal Christian—who doesn’t believe in their populist “small town values.”

This documentary, directed by Alexis Bloom and produced by Alex Gibney (Enron: The Smartest Guys in the Room; Taxi to the Dark Side; Park Avenue: Money, Power and the American Dream) is a well made but slick look at Roger Ailes’ rise and fall. Ailes acquired his TV skills in the Sixties, working on the major daytime talk show starring Mike Douglas. When Richard Nixon appeared on the show in 1968, Ailes pitched himself as the man who could create the proper TV image to sell “Tricky Dick” to the public. He not only succeeded but Ailes also become a leading subject in the best selling book The Selling of the President 1968, which documented how Nixon’s image was transformed from the 1960 loser to the 1968 winning campaigner.

Over the next couple of decades, Ailes was involved in campaigns to elect Rudy Giuliani mayor of New York and Ronald Reagan and George H.W. Bush presidents of the U.S. He retuned to television when the cable industry became popular in the Eighties, stating with CNBC and following with “America’s Talking,” which was bought by Bill Gates and became MSNBC. Furious at being deposed by a West Coast liberal, Ailes went to newspaper baron Rupert Murdoch and was able to create Fox News.

Ailes was able to transform America with Fox News, or perhaps it’s proper to say that was able to continue the process of changing America into a radical rightist country that he had started with Nixon. With its mixture of hate spewing middle aged men like Bill O’Reilly and a series of “Fox blondes,” Ailes created a TV channel that was the equivalent of the most virulent British tabloids, which were owned by Murdoch.

While Alexis Bloom charts his rise through archival footage and interviews, she also begins to build a case against Ailes through his Achilles heel, sexual harassment. A born bully, Ailes regularly hit on women who wanted to work with him, extracting favours if they wanted to maintain or grow their careers. Eventually, it all exploded in 2016, just when one of his favourite public figures, Donald Trump, was maneuvering into the White House. Accusations of sexual misconduct were first laid by Fox broadcaster Gretchen Carlson, then by Megyn Kelly and, soon after, by many more. Ailes was ousted though he did receive a multimillion-dollar exit package from Fox and did work for Trump on the election.

Roger Ailes’s death a year later is treated somewhat sentimentally by Bloom, who chooses to show the reaction of some Fox broadcasters, who clearly miss the man. Perhaps more chillingly, it’s obvious that Fox is still operating with Ailes’s mind set, even thought he’s gone. Quite a legacy!

One wishes that Bloom had been tougher with her subject but Divide and Conquer is a worthwhile effort and certainly interesting for liberals to see.