Film Review: The Sound of Metal and The Last Vermeer 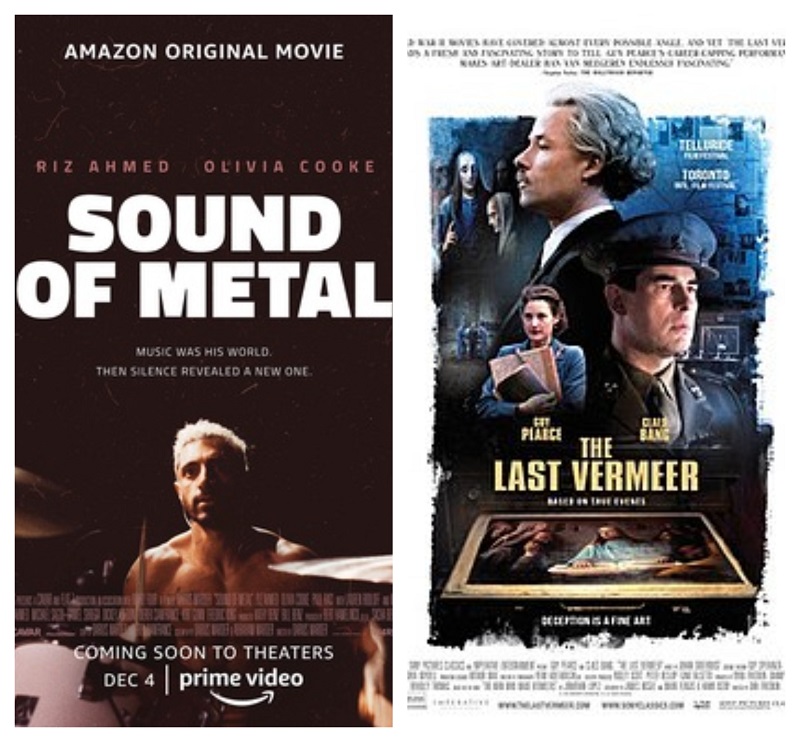 The Sound of Metal and The Last Vermeer

Adjusting to fate: a deaf drummer and an art forger

The Sound of Metal

An immersive drama mainly set in the deaf community, The Sound of Metal shows how a different way of life can transform individuals in humane and philosophical ways. Darius Marder’s film isn’t heavy handed but it is didactic: in order to achieve success, people who become deaf have to adhere to a new way of thinking. The film, a character study of how a drummer copes with deafness, offers a great opportunity for actor Riz Ahmed, who is terrific in his role of Ruben Stone. Context in this narrative is everything and it’s clear that Marder, a  former documentarian, was careful to include many deaf people in the cast, insuring a high level of authenticity. Playing off Ahmed’s angry but thoughtful performance is Paul Raci’s Joe, a Vietnam veteran who lost his hearing during the war and is now running the community. While Raci isn’t deaf, he is a CODA (Child of Deaf Adults), a certified Sign Language Interpreter as well as a musician—perfect for this film.

Before we’re introduced into the world of the deaf, the audience experiences Ruben’s life as a musician. He lives in a van with his girlfriend Lou, who is the singer in their heavy metal duo. Their relationship is tender and private: we realize quickly that both have personal issues involving substance abuse (Ruben) and dealing with the death of a parent (Lou), which the other has helped to, at least partially, cure. Hearing their band play gives insight into the inner states of both of them: their music is an overwhelmingly loud mix of punk, Noise and heavy metal. There’s anger and anguish being let out in their daily gigs as they tour the U.S.

It doesn’t take long for Ruben to lose most of his hearing, which is rendered in the film through muffled sounds that one might experience in an echo chamber. Astonishingly, he wants to continue the tour to get them more money but Lou is able to arrange through an addiction sponsor to get Ruben admitted into the community run by Joe. At Joe’s insistence, Lou is made to leave because learning a new way of life will be a full-time occupation for Ruben. Much of the heart of the film is played out as Ruben is taught to live collectively with a group of adults and children who are spectacularly alive though deaf. Ruben learns sign language and proves to be a good teacher to the kids. Joe is so impressed that he offers to have Ruben stay as a mentor and assistant to the group.

The main issue in the film is whether Ruben can accept the deaf life style and Joe’s philosophy of “stillness,” which seems like a Buddhist state, or oppose it and join the auditory world. Rather than embrace Joe’s community, Ruben sells his van and sound equipment in order to finance simultaneous bilateral cochlear implants, which somewhat restores his hearing. He goes to France to collect Lou and return to their previous life. But Lou sees the folly in this and Ruben has to decide what to do.

Although not as dramatic as in The Sound of Metal, the choice of living with limited hearing or committing to a deaf life is a real one that people deal with every year. The reality of that choice and the growing number of well informed and confident members of the deaf community places this film into one of true relevance today. Marder’s film is very well made and the performances of Riz Ahmed, Paul Raci and Olivia Cooke are fine but what raises The Sound of Metal to a “must-see” is the genuine issue confronting the deaf community. This is a film well worth seeing.

John Orloff, Mark Fergus and Hawk Ostby, script based on “The Man who made Vermeers” by Jonathan Lopez

Set in the chaotic period in the Netherlands at the end of World War Two, when the Canadians temporarily took over the country before the Dutch government legally returned, The Last Vermeer is a fascinating tale of art forgery, Nazis, misplaced alliances, treacheries, fistfights and a lot of good whiskey. The dramatized story in Dan Friedkin’s debut feature is based on the real life of Han van Meegeren, a great art forger, whose creation of Vermeer’s “Christ and the Adultress”—a painting that never existed—was sold to the second most powerful Nazi, Hermann Goering, for $1.6 million guilders. Van Meegeren’s real tale would make an even more interesting film than The Last Vermeer: he was a rouge, a painter, a forger, a womanizer and potential collaborator, who ended becoming a beloved figure in the Netherlands. But that’s not the film that is being released today.

Perhaps the best way to describe The Last Vermeer is that van Meegeren’s life inspired this rendering of the tale. Rather than focusing on the artist, Friedkin’s film is centred on Captain Joseph Piller, a Dutch Jewish former Resistance officer, who is employed by the Canadians to deal with collaborators and Nazis at large in Holland. The problem is that Piller, though well enough played by Claes Bang, isn’t anywhere as interesting as van Meegeren. Much of the action in the film concerns Piller dealing with anti-Semitism and the anger that the establishment Dutch felt towards being managed, though benignly, by the Allies. Piller is also finding it hard to relate to his non-Jewish wife, who consorted with the Nazis while passing on information to the Resistance.

Perhaps feeling that Piller’s story isn’t all that compelling, the filmmaker falls back on clichés to add punch to the narrative. Shock questioning of van Meegeren’s friends and enemies inevitably occur in the middle of the night for no discernible reason at all. Piller’s right hand man, played by Roland Moller, quickly takes up the forger’s fondness for whiskey and cigars, and finds himself engaging in fruitless fisticuffs, just to enliven the proceedings. And there are flashbacks to decadent parties with the Nazis, which are downplayed by van Meegeren and his friends as simply a way of keeping the peace.

What really makes the film interesting is the inevitable courtroom trial where Piller and van Meegeren prove that the artist really was a forger and how he did it. Needless to say, the witty Han wins over the Dutch public, who see him as a hero, putting one over on the Nazis. Though there is much more one could say about this astonishing forger, it is nice to know how popular he was at the end of his life.

The Last Vermeer is essentially a two-hander for a couple of charismatic actors. Claes Bang, who played the curator in The Square and the duplicitous art critic in The Burnt Orange Heresy continues his dalliance with the art world in The Last Vermeer. Though not as effective as in the other two films, he fits in well into this film. The true star, though, is the chameleon performer Guy Pearce, who makes the haughty van Meegeren into a fascinating character. Pearce has appeared in Priscilla, Queen of the Desert, L.A. Confidential, Memento, Mildred Pierce, The Hurt Locker and The King’s Speech in radically different roles. As always, he does a fine job in The Last Vermeer, a good film that could have been greater. Still, it’s worth a view especially if you love art and history.