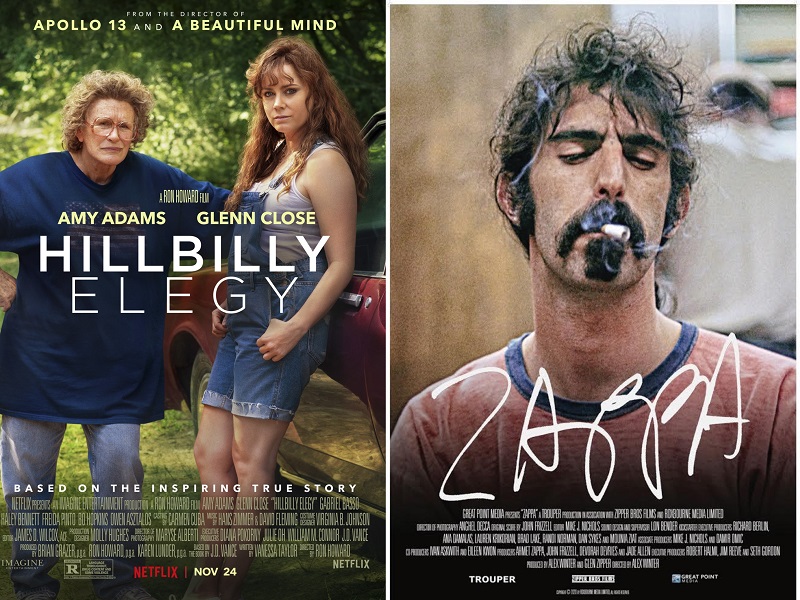 Zappa’s lifelong battle against conformist USA stands in stark contrast to J.D. Vance’s fight to be an American success story

Although the US election ended up with a victory for Joe Biden, it’s clear that the country is hopelessly divided between red and blue states, between Republicans and Democrats, between bedrock conservatism and “establishment” liberalism. While 80 million Americans voted for Biden, 74 million supported Trump—both startling high figures. Commentators on both sides of the political spectrum are endlessly trying to figure out how this great divide has occurred and what can be done to make the States united again.

It was in the atmosphere of liberal self-examination that took place after Trump’s unexpected triumph in 2016 that J.D. Vance’s book “Hillbilly Elegy” scored a huge success, spending months on the NYTimes and Amazon best seller lists. Vance’s memoir is a family saga, in which his Mamaw and Papaw (grandmother and father), hillbillies from Appalachia, eventually achieved a modicum of middle-class success in Ohio but at a dire cost: the two fought viciously all the time and raised children, who were victims of domestic violence. Bev, Mamaw and Papaw’s younger daughter and J.D.’s mother, turned out (unsurprisingly) to be aggressively violent to her two children, continually falling in and out of relationships while being a drug abuser. Yet despite recalling terrible scenes of anger and physical battles,  in J.D.’s book, there’s an emphasis on the reality of the Vance’s lives: they’re not phonies—like the liberals.

Vance’s memoir is far more contradictory than Ron Howard’s new Netflix produced film about him and his family. In real life, though J.D. took it on the chin—and everywhere else on his body—he kept on fighting and quite quickly became a lawyer, venture capitalist and cultural commentator representing a conservative point of view in the media. No obstacle could beat him: he presents himself in the book as a true success story, parading his roots as a measure of his authenticity. Yet, he also denounces hillbillies and blue colour workers—or at least their progenies—if they don’t have the gumption to triumph over the system that he believes the corrupt liberals have set up to coddle them into impoverished submission.

In 2016, the book “explained” how Appalachia and blue colour states like West Virginia, Ohio, Kentucky, Pennsylvania and others switched from being Democrats to Republicans. What does Ron Howard’s film do in 2020? As a director, Howard has an instinctive ability to find the way to turn his films into mainstream hits. He pulls back on any criticism of Vance’s hillbillies and figures out a way to turn J.D.’s problematic mother and Mamaw into gutsy women who were trying to do their best despite dreadful circumstances. J.D.’s story in the film is told during his time at Yale Law School, desperately trying to get a high paying summer job that will pay off debts and set him on his career path. The main narrative, apart from many flashbacks, concentrates on J.D.’s desperate attempt to take care of Bev, now kicking heroin, in enough time to get back for the key job interview that will propel his career forward. There’s no time to reflect on J.D.’s situation and those of his family because of the faux thriller plot device inserted into the core of the film.

To be fair, Howard’s film is unsparing in its depiction of the abusive relationships that lie at the core of the story. If anything, there may be too many excruciating confrontation scenes. But that does allow Howard’s perfectly cast women—Amy Adams as Beth and Glenn Close as Mamaw—to impress audiences with bravura scenes. Make no mistake, their performances are riveting. Adams shows absolute commitment to the volatile Beth, a woman capable of kissing and having fun with a young J.D. and then flying into a shocking rage a minute later. Close dials in the tough-as-nails Mamaw, hell bent on making J.D. into a kid who can graduate high school and make it to college.

Howard’s film flattens Vance’s more complicated book but I suspect that a huge audience will see it on Netflix. It’s upsetting in a way that both Republicans and Democrats might accept. Hey, maybe Ron Howard should run for office.

Alex Winter, director and script for this documentary feature

A key member of the Sixties generation of musical mavericks and misanthropes, Frank Zappa’s life-story remains decidedly unique. Raised in an arch-conservative small town in 1950s California, Zappa, like so many others, rebelled against the rigid conformity of the times. But he was never an abusive drug taker or an advocate for peace, love and rock’n’roll. His notorious group, The Mothers of Invention, prided themselves on making fun of not only the conformists but even their own fans. Zappa never seemed to abandon a sneer as his band played songs that mocked rock while outplaying most of his competitors. He let it be known early on that his favourite composer was Edgard Varèse and that writing a complex polyrhythmic piece like “Ionisation” would be far preferable to him than composing satirical songs for hippies.

Alex Winter’s meticulously researched documentary on Zappa takes us through his strange and contradictory career. Despite writing and playing technically excellent blues and hard rock music, Zappa never attempted to compose a hit song, though one did arrive—”Valley Girl”—very late in his life. (He and his daughter Moon created it to spend time together; they were shocked when it became a Top Forty success.) He proclaimed himself to be better than the so-called gods of rock but Zappa spent years with groupies like Pamela des Barres (who is honest and funny in the film) and her band the GTOs; he may not have enjoyed drugs but the documentary makes it clear, he did love sex. He showed talent as a visual artist but his films, even the relatively well known “100 Motels,” never followed through on structures or ideas in a way that might have cultivated an audience.

More alarmingly, he continued to spend far too much time satirizing adolescents and hipsters, even after the Sixties generation grew old. Zappa’s youthful targets were no longer worthy of his barbs by the late Seventies. Luckily, Zappa’s career became increasingly more relevant in the Eighties. He began to write pieces like “None of the Above” for the Kronos Quartet and producing recordings of his serious work with the London Symphony Orchestra. And Zappa found a new target for his fights in the Parents Music Resource Center, a group which was attempting to censor rock music. Ironically, it was Zappa who rose to the defense of rock, suggesting that instead of a parent’s advisory warning sticker be placed on a lot of record albums, a lyric sheet be provided instead. Though Zappa didn’t win, his articulate defense of rock music gained him a great deal of respect in music circles.

As a documentary, Zappa is a visual and auditory delight. Shots from Zappa’s archives of personal films and concert footage are engaging and so are his articulate interviews. Much of the end of the film emphasizes Zappa’s serious music and one can see that he could have actively pursued a career as a composer had a fatal bout of cancer not intervened. Winter’s film brings clarity to Zappa’s career and will win him new fans nearly 30 years after his demise.