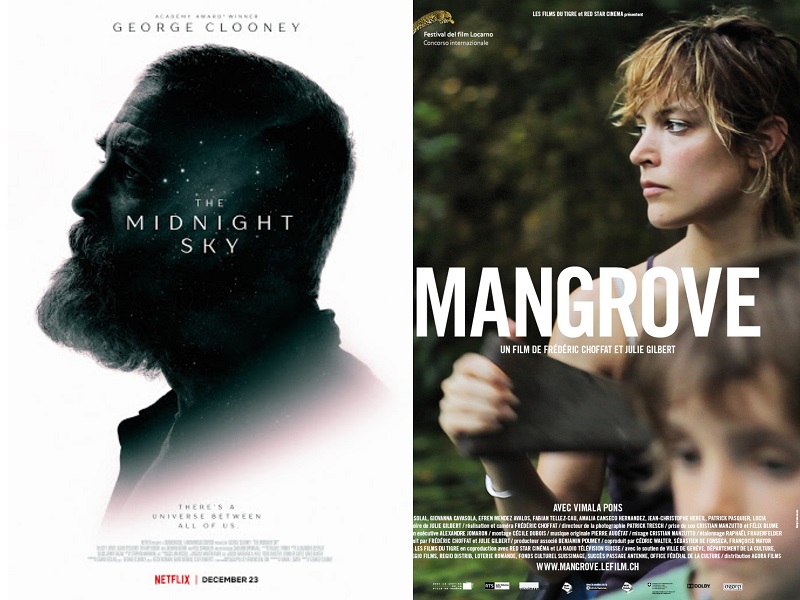 The Midnight Sky and Mangrove

Memorable tales of the past and future

You’ve got to hand it to George Clooney. He uses his immense clout as a mega-star to create the kind of movies he wants to see every couple of years. Though not all have been great, Clooney usually has a message lurking behind his films and it’s fair to say that he did hit the heights once with Good Night, and Good Luck, his lovely evocation of the legendary media journalist Edward R. Murrow’s fight against the raging right-wing populist Senator Joseph McCarthy.

The Midnight Sky is, on the surface, an adventure tale set in the future with Clooney fighting the brutal polar elements to reach a weather station where he can contact a space ship to let its crew know that they shouldn’t return to Earth after “the event.” We’re never told what happened to the planet but it’s clear that something devastating has occurred and all of humanity has died in the past week. None of that is known by the officers on the spaceship Æther, which is returning from finding a habitable moon, K-23, circling Jupiter.

Hanging over the film is the “event,” which Clooney’s scientific genius Augustine implies was caused by an unknown fatal flaw in humanity. The prospect of saving the crew on the ship and sending them back to a new home near Jupiter is what motivates the dying scientist to battle the fierce Arctic storms to let them know what’s happened on Earth.

While The Midnight Sky has a downbeat tone, it’s structured like a 19th century novel, where each chapter alternates between one situation and a contrasting one. We move seamlessly from Clooney’s Augustine in the high North to the spaceship where Felicity Jones’ Sully is expecting a baby with David Oyewolo’s Commander Gordon Adewole. Also on board are the effervescent Maya, and two old vets Mitchell and Sanchez. Although there’s a lot of banter between the crew,—a nice safety valve from the morose tone of Clooney’s scenes—adventure is never far away, particularly when the Æther is struck by two meteor attacks. There are also flashbacks, which imply a relationship between one of the crew members and Clooney’s Augustine.

The Midnight Sky is a reasonably good film, enlivened by the presence of a number of fine actors. Clooney, Felicity Jones, Sophie Rundle and a very young Caoilinn Springall certainly make the film entertaining. But the plot is hardly revelatory. If you like Clooney and science fiction (which I do), you’ll enjoy this new Netflix release. If not, there are plenty of other films and series and one-offs to see on Netflix and other streaming services this oddest of holiday seasons.

A passion project for Black British film director and video artist Steve McQueen, Mangrove is the first part of Small Axe, a five-film series about the lives of immigrants from the Caribbean, who moved to England after the second World War, and learned to adjust to the racism and class system in their imperial motherland. The longest of the films, Mangrove was due to launch at Cannes but had to wait to premiere at this fall’s New York Film Festival due to COVID concerns. Funded in the main by the BBC and Amazon Film Studio, the films validate the history of Blacks in Britain as told by McQueen, whose Oscar-winning 12 Years A Slave took him from being a key figure in the art world to international fame as a film director.

For the first film in Small Axe, McQueen decided to dramatize the first key legal case involving Black British people, that of the Mangrove 9 in 1970. Set in West London’s Notting Hill district, the Mangrove was one of the first successful Caribbean restaurants, offering spicy food in a convivial atmosphere where people could speak, eat and drink freely. Owner Frank Crichlow soon found himself and his restaurant attacked by the local police, in particular the racist Constable Frank Pulley. Raided constantly for drug violations—none of which were found on the premises—the harassment repeatedly took place in 1969 and 1970. Crichlow was supported by the local population, but his most notable advocates were the controversial and radical Black Panthers, who were led by Altheia Jones-LeCointe, her then-partner Darcus Howe and Barbara Beese. In August 1970, the neighbourhood launched a protest against the police, leading to a riot, in which a number of local Blacks were arrested.

The 9, which included Crichlow and Rhodan Gordon, who was a friend of McQueen’s father and the three Panthers, were charged with incitement to riot but the case was thrown out of court by the local magistrate, who found the police to have racist attitudes towards Notting Hill Blacks. Not to be outdone, the director of Public Prosecutions ordered them to be re-arrested on charges of riot and affray.

At this point, the trial of Mangrove 9 becomes the focus of McQueen’s film. In the first half, the narrative invites one into a casual intimacy, with the new British Blacks eating, dancing, drinking and engaging in bright conversations—particularly the Panthers. Reggae music is heard and you can practically smell the food as it’s being delivered to tables at the Mangrove. McQueen approaches the fateful demo through a slow build-up, which quickly escalates as the Blacks find themselves crushed into each other by police on either end of the parade. The camera locks in on some of the nine, particularly the women, as panic begins to ensue in the crowd. It’s a bravura, quite physical, scene and a true tour-de-force for McQueen.

As the trial unfolds, McQueen’s approach changes. He focuses on Jones-LeCointe, Howe and the rest of the 9’s lawyer Ian Macdonald, who get to speak against the prosecuting lawyers and to the judge, a white upper-class prig, who nonetheless begins to understand their arguments during the 55 days of the trial. A major coup for the 9 was deciding to have Jones-LeCointe and Howe to represent themselves, which allows more questions to be asked than would have been allowed Macdonald if he had defended everybody.

During the trial, Macdonald and Jones LaCointe and Howe got to make a case for an all-black jury (based on the Magna Carta), introduce the phrase “black power” into the trial and were able to at least partially establish the racism of the police. In the end, the 9 were judged innocent of their major charges, a major victory for the Black British not only in Notting Hill but throughout England.

A documentary on YouTube entitled The Mangrove Nine, directed by Franco Rosso and John LaRose at the time, makes fascinating viewing after seeing McQueen’s film. The casting by McQueen is meticulous: the 9 look, speak and dress like the real defendants at the trial. Steve McQueen has made a terrific film—truthful, dramatic and truly important if one wants to understand what happened to Britain when Blacks genuinely joined their society.