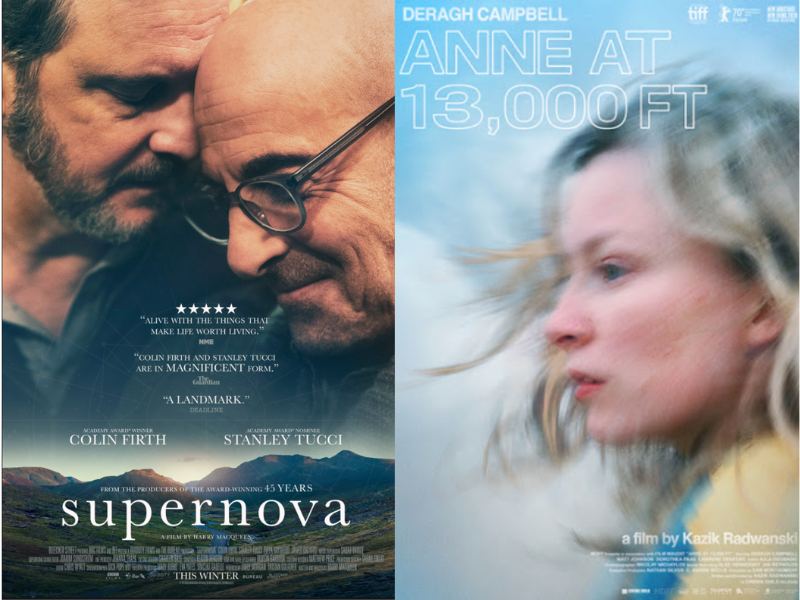 A film of civility and charm masking an unyielding tragedy, Supernova traces the last days of Tusker (Tucci), an acclaimed American writer, who is travelling through Britain’s gorgeous Lake District with his long-time partner Sam (Firth). Tusker has Alzheimer’s and Sam, a gifted pianist and sensitive soul, is trying his best to ease his lover’s painful reality. The gentle banter between the two as they drive through the beautiful terrain, testifies to a 20-year-old love relationship that has been, in the main, idyllic.

The problem is now. Sam has always let Tusker run the show: he’s been the dreamy musician to his American partner’s practical wisdom. To Sam, this offers him the chance to pay Tusker back by taking care of him. But that’s exactly what Tusker doesn’t want. He’s been in charge throughout his life and hates the idea that other people will have to manage him.

In Supernova’s big scene, the duo arrive at a family cottage—to celebrate Sam at a surprise birthday. As one can imagine, Sam and Tusker’s friends are a colourful mix of British artists, academics, and mavericks. There’s much love and humour in the set-piece and one can see exactly what both of them will miss after Tusker loses more of his memory.

Films like Supernova often lead to the big questions: what should one do when faced with dementia and Alzheimer’s? Tusker, a man who has a plan for everything, is sure to come up with a resolution that works for him. But will it work for Sam? This film is a great two-hander with compelling performances by Stanley Tucci and Colin Firth. It’s an emotional ride but for Zoomers with the nerve to confront hard issues, Supernova is a film to see.

We’ve all met people like Anne, who make life way too difficult for themselves. You can pity them or try to change them or fight them. All of that happens to his lead character in Canadian auteur Kazik Radwanski’s latest film, Anne at 13,000 Feet, which will be streaming at TIFF Bell Lightbox’s site starting this Friday, a year and a half after receiving critical acclaim on the festival circuit in 2019.

Radwanski is still in his 30s but has already created a visual and narrative signature after three features. His films are tough, poignant but unsentimental tales of loners attempting to come to grips with life. His use of closeups forces us to understand his characters’ confused attempts to reach out to others. When combined with strong performances, Radwanski’s films can be emotional gems. Even when they don’t reach such heights, they make for compelling viewing.

Anne at 13,000 Feet is Radwanski’s best film yet thanks to a brilliant performance by Deragh Campbell as the titular lead. As Anne, she goes beyond a Method performance: she actually inhabits the character. It doesn’t feel that Campbell is acting; her collaboration with Radwanski is so deep that it feels as if you’re viewing a cinema verité documentary.

Anne is in her early 30s, untethered, living alone in Toronto. She works at a day care with her closest friend, Sarah, who has taken Anne and other young women on a sky-diving trip at her bachelorette party. To Anne, being at 30,000 and parachuting out is the highlight of her life—so far. At Sarah’s wedding, Anne makes the bridesmaid speech and hooks up with the groom’s best friend, Matt (played by the brash Canadian director Matt Johnson). Their relationship is quite awkward—a typical Radwanski trope—especially when Anne brings Matt to her mother’s for dinner and announces that he’s her serious boyfriend. Though Matt turns what could have been a social disaster into a funny “date,” it’s clear that he’s beginning to question why he’s gotten involved with Anne.

Things aren’t working out that well at the day care either. Anne vacillates between loving the kids—almost hanging with them—and finding them annoying if she’s feeling depressed or upset. One member of the day care staff takes a dislike to Anne, making the work that much more stressful.

Radwanski’s camera follows Anne as her moods fluctuate madly. Who is she? What will she become? There are no answers in Anne of 30,000 Feet. We are watching someone whose life may turn into a disaster. Or perhaps not. Thanks to Radwanski, Campbell and a young, talented Ontario film crew, Anne of 30,000 Feet is an authentic and unique piece of cinema. Not for everyone, of course, but some who see it, will absolutely embrace it.