Film Review: Minari and The Mauritanian 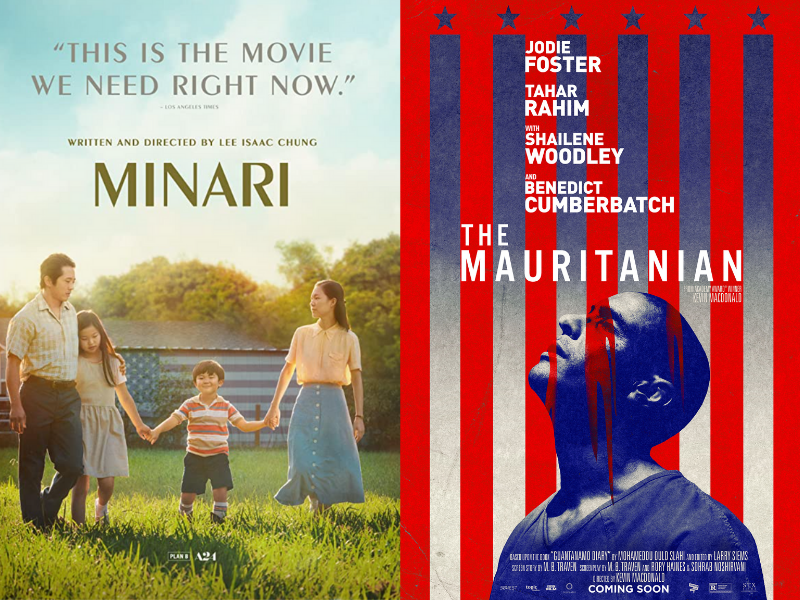 Minari and The Mauritanian

Being Foreign in America

Many people hadn’t heard of Minari until the Golden Globes jury nominated it for their Best Foreign Language Film. Suddenly, social media as well as newspaper and TV reporters were agog over the faux-pas. While it’s true that the majority of the dialogue in the film is in Korean, Minari is shot exclusively in the United States and is a classic American immigrant tale. It won the U.S. Dramatic Grand Jury Prize and U.S. Dramatic Audience Prize at the 2020 Sundance Film Festival. So it’s American enough for U.S. audiences, but not to the Hollywood Foreign Press Association.

Director and scriptwriter Lee Isaac Chung has created an unvarnished memoir of growing up Korean-American in 1980s Arkansas. What’s most surprising about Minari is its lack of sentimentality. From the beginning, we see that Chung’s cinematic parents Jacob and Monica Yi aren’t happy with each other. Monica didn’t want to leave their first American home in California to pursue Jacob’s dream of becoming a farmer. You can see her frustration, living in a mobile home, in a vast field, which will take years to turn into a huge farm.

Jacob, on the other hand, has adapted better to American life than his wife. He’s great at performing their inconsequential job, identifying the sex of baby chicks. And Jacob clearly knows how to be a farmer. Quite quickly, he finds an eccentric Arkansas reborn Christian, Paul (played brilliantly by Will Patton), who does know how to farm while being humble enough to follow Jacob’s lead on most agricultural matters. Mainly to placate Monica, Jacob sends for her mother, Soon-Ja, to take care of their chronically ill son, David and daughter Anne.

With the arrival of Soon-Ja, the film really takes off. It turns out that she is no ordinary grandma. She doesn’t cook at all and loves to gamble. Soon-Ja is clearly a fun-loving urban woman, not an old-fashioned lady at all. David, who has a heart condition and is clearly based on Chung, is completely unimpressed by his grandmother. While Anne, the older daughter, is lovely and relatively placid, the stormy relationship between Soon-Ja and David is mirrored by that of Monica and Jacob. We know that underneath the fighting is love, but will it manifest itself in time?

In the most beautiful scene in the film, Soon-Ja and David go to a creek near Jacob’s potential farmland. There, she plants minari seeds she brought from Korea, telling David about the wonders of the plant, which grows easily and is a fine herbal tonic as well as a flavourful addition to kimchi and soup. Just like minari, we realize, this Korean family—and many others—will grow to complement American society.

Partially inspired by neo-realism, Minari is a very well made contemporary rendering of the American dream. Blessed with an extraordinary performance by Youn Yuh-jung as Soon-Ja and bolstered by the presence of Steven Yeun as Jacob, Lee Isaac Chung’s film is terrific. Let’s hope it wins several Oscars, but not in the Foreign Language category.

The Guantanamo Bay Detention Camp has been existence for 18 years, to the shame of Americans who believe in their country’s justice system and Constitution. For all of those years, U.S. liberals, including many in the arts, have decried the penal structure erected by George W. Bush and maintained by every President since then, that placed prisoners in a naval base in Cuba, where civil rights and the U.S. legal system do not prevail. A plethora of articles, news reports, docs and books have made the case that the U.S. was destroying its reputation internationally by detaining nearly 780 prisoners on charges that they were terrorists, most likely involved in 9/11 or other Islamic acts of violence. Though the number of prisoners is down to 40, “Gitmo” still exists, with its reputation of abusive conditions against detainees now well documented.

One of the more high profile cases in Guantanamo’s now cursed history is that of  Mohamedou Ould Salahi. He’s the subject of the new docu-drama feature The Mauritanian, which takes his case and turns it into a big-budget accusatory film. The producers have mustered the star power of Jodie Foster, Shailene Woodley, and Benedict Cumberbatch to play dueling lawyers while giving the part of Salahi to the terrific Tahar Rahim, the lead in the excellent French film A Prophet, who shines in the first English language film he’s made that will be seen by many. The director of the film, Kevin Macdonald, is a fine choice as his career has moved from making the Munich Olympic disaster Oscar winning documentary One Day in September to political thrillers like the Russell Crowe starring State of Play.

Macdonald and his screenwriters have done a good job of explaining the backstory of Salahi while focusing on the case led by civil rights attorneys Nancy Hollander (Jodie Foster) and Teri Duncan (Shailene Woodley) to get him out of Gitmo. A Mauritanian, Mohamedou Ould Salahi had fought with Al-Qaeda in the early 1990s, when the organization was working with the Americans to overthrow Communism in Afghanistan. After that, he claims to have had nothing to do with them apart from helping a cousin, who was a spiritual adviser to bin Laden, to get a few thousand dollars to relatives in Mauritania. American security forces certainly had reason to be suspicious of Salahi’s activities in places like Montreal but they had no proof to convict him of anything.

Macdonald chose to make The Mauritanian a legal thriller so the focus of the film often shifts to Lt. Colonel Stuart Couch, a ramrod stiff American military lawyer, who lost his best friend on one of the planes during 9/11. Benedict Cumberbatch, who is quickly turning into more of a character actor than a star, is fine in the role of Couch, getting his American accent and demeanour just right. A great part of the drama—and it really took place—is the conversion of Couch from a fiery prosecutor to someone who chooses to withdraw from the case after he realizes that any confession made by Salahi was extracted due to the torture wreaked on the Mauritanian by the US military and security forces.

In a veritable showpiece, the audience is assaulted with a montage of what happened to Salahi: waterboarding, extreme cold, having to stand in crazy positions for hours, sleep deprivation, near drowning at sea and sexual abuse. Lawyers Hollander and Duncan are denied access to the files on Salahi for years in a Kafkaesque subplot.

Somehow, during all of the years leading up to Salahi’s suing of the U.S. government, the Mauritanian wrote a book. “Guantanamo Diary” became an international hit and after winning his case, Salahi is finally allowed to go home—after 14 years.

The Mauritanian is one of those real-life stories that is more fascinating than most fiction. Though the film could have been more incisive and complex, the acting in it is top notch and the story, compelling. If you don’t know about Mohamedou Ould Salahi, this film will astonish you.