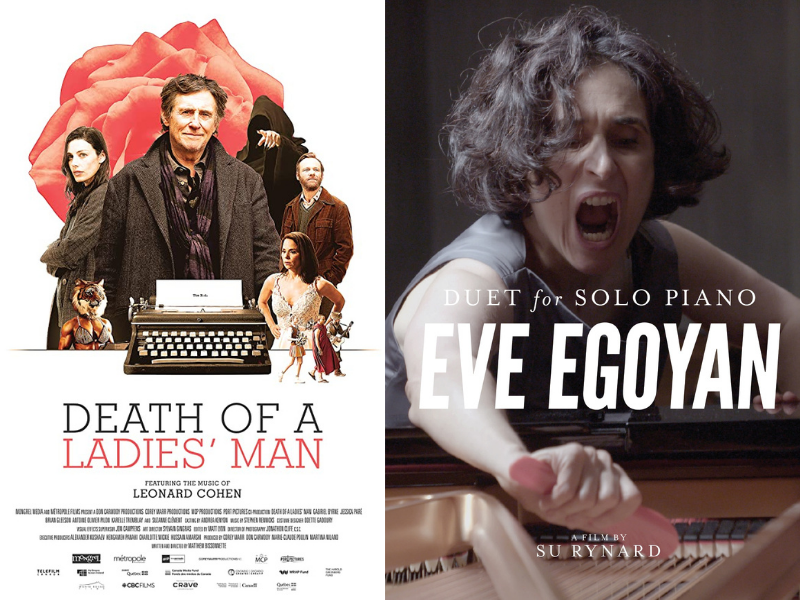 Death of a Ladies’ Man & Duet for Solo Piano

Montreal on My Mind

Death of a Ladies’ Man

The film is available March 12 to rent or buy on the Apple TV app/iTunes and other VOD platforms.

Death of a Ladies’ Man
Lovers of Leonard Cohen will either embrace or be upset by Matt Bissonnette’s latest exploration of the mythology surrounding Montreal’s beloved poet and songwriter. Raised in Montreal, Bissonnette is clearly besotted by Cohen, who was the inspiration for his earlier film Looking for Leonard and is now the focus for
Death of a Ladies’ Man. Many Montrealers, particularly middle-aged or older white English-speaking men, admire Cohen’s evocation of weary or doomed romance in a noirish city. In their embrace of a love that can never last, Cohen’s songs are appealing to people who want to believe in emotions and idealism but can’t see beyond the pain of their own lives. Though Bissonnette is younger and talented, he understands the spirit of those who have become nearly obsessive admirers of Cohen.

Bissonnette’s film takes us on almost stereotypical Cohenesque journey with a middle-aged Montreal literature prof, who is divorcing his much younger, cheating second wife and drinking way too much booze. Samuel O’Shea (Gabriel Byrne) is not just a Montrealer, he’s a transplanted Irishman, full of all of the whimsy and sad allure of his birthplace. O’Shea had been married to a beautiful and hip Quebec woman, Genevieve, but their romance went sour after he had too many affairs with students and bohemian friends. Their two kids turned out almost comically different, with Layton becoming a gay hockey player living in Ontario while Josee remained in Montreal, a true Quebecoise angry performance-artist. Unsurprisingly, Sam has been drinking too much, supposedly for his psychic pain but it’s a true headache that he’s developed. His blissfully morbid doctor lets him know the truth: he has a huge cancer in his brain.

What would a charmingly beautiful loser like Sam O’Shea do with such news? Without hesitation, he would fly off to the old country cottage in Ireland. There, he spends time with the ghost of his father Ben (Brian Gleeson), who he had already been commiserating with in Montreal. In Ireland, he meets his dream girl Charlotte (Jessica Paré) while confronting thoughts of death and desire. The book that Sam always wanted to write comes to him while on his home island but it’s in his adopted island of Montreal that he returns for what appears to be a stunning
comeback until a final ironic twist intervenes.

Throughout Death of a Ladies’ Man, Cohen songs can be heard including “Bird on a Wire” during a very odd hockey ballet and “Did I Ever Love You” in a summation scene near the film’s denouement. It is, like most of the film, a bit too “on the money” to be poetic. Bissonnette’s film wrestles sincerely enough with fate and love and family and alcoholism and desire. You know, the big themes. While the acting is fine—Gleeson and Paré are particularly good—this drama never rises to Cohen’s heights. We’ll be reading Cohen’s poetry and singing his songs in another 25 years, but will we be viewing Death of a Ladies’ Man? This reviewer won’t answer until imbibing some true Irish whiskey.

Duet for Solo Piano
How do you portray the spirit of a shy avant-garde artist? Director Su Rynard, whose past works include the documentary feature on songbirds The Messenger, the semi-doc semi-fiction Kardia and video installations, has the right background to understand the life and career of the quietly brilliant Eve Egoyan. Over the past
couple of decades, Egoyan has developed a reputation as a classical pianist of impeccable technique, specializing in rendering the work of such modern Canadian composers as Ann Southam and Linda Caitlin Smith. Both Southam and Smith are known for their minimalist but lyrical pieces, which match the sensibility of Egoyan to a tee.

Though they weren’t close, Rynard and Egoyan had known each other socially and it made sense that they would eventually collaborate. It was Egoyan who approached Rynard to document a year-long experiment in which the pianist would work on premieres of new pieces by modern Canadian composers while
presenting herself in a new way as a performance artist/musician. Much of the focus of the first half of the film is on Egoyan trying her utmost to break out of her shell, moving on stage, making hand and facial gestures, and addressing either figures on a screen or in the imaginary audience that will eventually be there when
the artistic evening is premiered.

Surrounding Egoyan as she works on her performance are dramaturge Joanne McIntyre, interdisciplinary artist Katherine Duncanson and producer Phil Strong. They and others form a circle of support for her as she attempts to create an outward public persona on stage. These intimate scenes are matched by
sequences shot at Egoyan’s home as she makes Armenian food with her daughter Viva and spends time with her husband David Rokeby, an internationally recognized installation and interactive artist. Egoyan’s family has its roots in Armenia, a subject that has been explored in the cinema of her older brother Atom. For Eve Egoyan, Armenian culture can’t be found in her music but in some
of her cooking, the ancient and dignified society still has a place.

As the film reaches its peak, we see the rehearsals becoming more intense, as she interprets music composed for her by such notables as Michael Snow, John Oswald, Nicole Lizée and Linda Caitlin Smith. David Rokeby contributes a complex device that creates beautiful images on a screen composed through Egoyan’s playing of the piano. Much of the work is dazzling to this viewer, who admittedly loves contemporary music and Egoyan’s approach to it.
Su Rynard has created a film that matches Eve Egoyan. Both are artists, who go about making fine art without being overtly showy. Perhaps that’s why this film, by one Toronto artist about another, is being seen at Montreal’s Festival of International Films on Art (FIFA) rather than celebrated in their hometown. Duet for Solo Piano fits along with such films on artists as Erwin Olaf—The Legacy about the Dutch photographer’s work; Regis Campo: Strange Beautiful Music and Sebastian Tellier: Many Lives. More artists speaking for themselves appear in: Homecoming: Marina Abramovic and her Children; Lang Lang—Goldberg Variations and Jorge Pardo in Trance about the flamenco-jazz artist.

Montreal’s FIFA is a magnificent festival presenting a plethora of films on art every year. The opening night film Beijing Spring marries art and politics, concentrating on manuscripts posted on walls during the Tiananmen Square Spring, long before the strangely capitalistic Communist system of China today had been established. The festival sends its viewers to other realms: Turkey with a theatrical troupe in Queen Lear; Sao Paulo, Brazil for a portrait of architect Paulo Mendes de Rocha in It’s All A Plan and Japan for a visit with another architect Ryue Nishizawa in
Tokyo Ride.

All in all, FIFA will present 249 films from 49 countries in the period between March 16 and 28. You can find out ticket and other information at lefifa.com