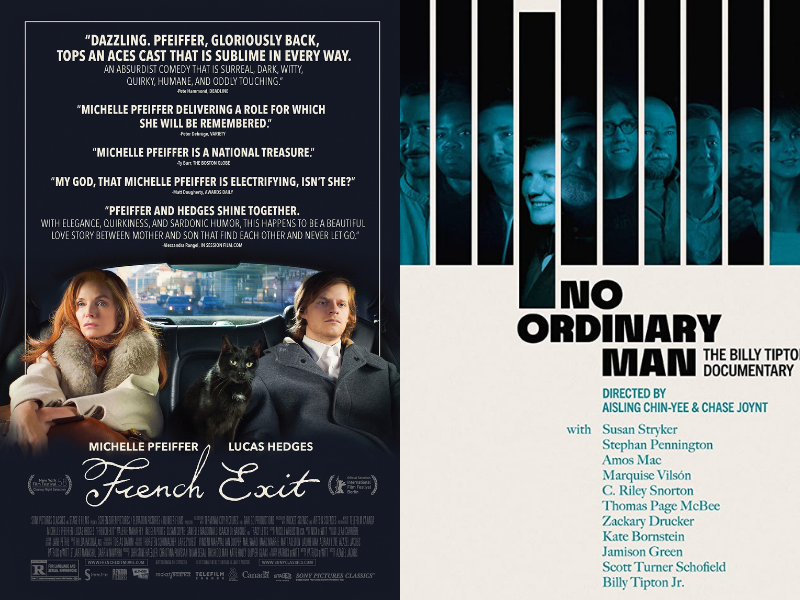 French Exit and No Ordinary Man

Patrick deWitt, script based on his novel

Aisling Chin-Yee and Chase Joint, directors of this feature documentary

When Frances Price, a stylish upper crust Manhattan widow finds out from her financial planner that she is dead broke, she doesn’t know what to do. The planner is astonished at her indecision because he’d been warning her about insolvency for the past decade. What was her plan, he asks her, in exasperation. Frances’ flippant answer charts the film’s trajectory, “I intended to die before that happened.” Since that hasn’t worked out, Frances decides to move to Paris to stay in her best friend Joan’s apartment with her quietly adoring son, Malcolm. But this turns out to be only the first “French exit,” or sudden departure, in the film.

Canadian novelist Patrick deWitt has adapted his own novel into a script that has been labelled as everything from absurdist to surrealist to a “work of comic genius” (in The Guardian, no less). Azazel Jacobs, a long-time collaborator of deWitt’s, is a fine director of actors and paces the story unhurriedly, allowing the quirks of every character who meets Frances and Malcolm to emerge naturally. And what a crew of eccentrics adorn the tale. There’s Frances Price, an insolent, tough talking, impossibly stylish urbanite; her son Malcolm, who is hopeless at making a decision but is loveable to older women; his angry but still-in-love fiancée Susan; Mme. Reynard, a wealthy widow who loves martinis and worships Frances; Joan, a very rich and wise friend of Frances; and Madeleine, a stand-offish psychic who can channel the voice of Price’s black cat Small Frank, who is, in turn, the reincarnation of Frances’ deceased husband Frank.

Over the course of this picaresque tale, all of Frances and Malcolm’s friends move into their apartment along with Susan’s rude-but-in-love boyfriend Tom; the detective Julius, who finds Madeleine; and the black cat Small Frank, voiced by the playwright and veteran actor Tracy Letts. Other cast members include the Canadian script-and-playwright and thespian Susan Coyne; the wonderful Ivorian actor Isaach de Bankolé; Brit Imogen Poots; Australian Danielle Macdonald; Lucas Hedges, who has ably supported Julia Roberts (Ben is Back), Nicole Kidman (Boy Erased) and Frances McDormand (Three Billboards Across Ebbing Missouri) in the past; and Michelle Pfeiffer, the beautiful and charismatic star (Scarface, Married to the Mob, Dangerous Minds, The Fabulous Baker Boys) who can still lead a superb ensemble.

The film charts a difficult terrain. Though often charming and funny, the narrative is ultimately quite dark. Pfeiffer’s character seems determined to spend all of the rest of her money and then make a true “French exit.” This makes the role of Frances Price a tough one to play. Is she tragic or frivolous? Why does she want to leave the human comedy she often runs when so many people adore her? Pfeiffer plays her as a woman on the edge of a nervous breakdown: willful, angry, but also quite caring towards her circle of friends. Her big love, of course, is her son, Malcolm, and it’s wise to end the film with a flashback scene of the two of them together.
How will people respond to this dark comedy? Some may feel betrayed by the ending but others will find it appropriate. There’s no doubt that French Exit is a stylish, sophisticated film.

Gender is at the core of one of the most moving and innovative documentaries of the past year, No Ordinary Man. Canadians Aisling Chin-Yee and Chase Joynt’s film is hardly your standard jazz doc although it does cover the life of the excellent American pianist, Billy Tipton. While we do hear some of Tipton’s skillful jazz stylings, the film revolves around the revelation after the piano player’s death that he wasn’t only a man or a woman; they (to use the correct contemporary parlance) were transgendered.

Appearing as a man during Tipton’s career, and married more than once, the piano player adopted several children and kept identity issues a secret throughout their life. Since there is no footage of the pianist in performance or in home movies, the directors rely for biographical details on Billy Tipton Jr.’s emotional recollections of his father along with some photos of Tipton, Sr. and recorded jazz music as well as Diane Middlebrook’s biography “Suits Me.”

In order to get closer to who Tipton might have been, the directors shot extensively with trans people who perform “Billy“ in scenes scripted by Amos Mac in what might have been a drama. This allows the actors to talk candidly to the camera about their lives, opening the film into a broader look at what happens to trans individuals in our society. Placing these performers in a brighter light, and encouraging them to discuss their feelings about Tipton’s life, No Ordinary Man becomes more than a bio and should open the eyes of many viewers of the film.

Billy Tipton had great talent, which is evidenced in the jazz recordings that can still be heard and enjoyed. In 1958, Tipton was offered the opportunity to have their trio be the opening act for Liberace and form a house band in Las Vegas. The offers, which included the funds to produce four more albums, was turned down by Tipton. Was it fear that more fame might have exposed his life as a trans gender individual? We’ll never know.

In any case, No Ordinary Man is a unique film, worthy of your attention.