Film Review: The Adventures of Saul Bellow and Marathon 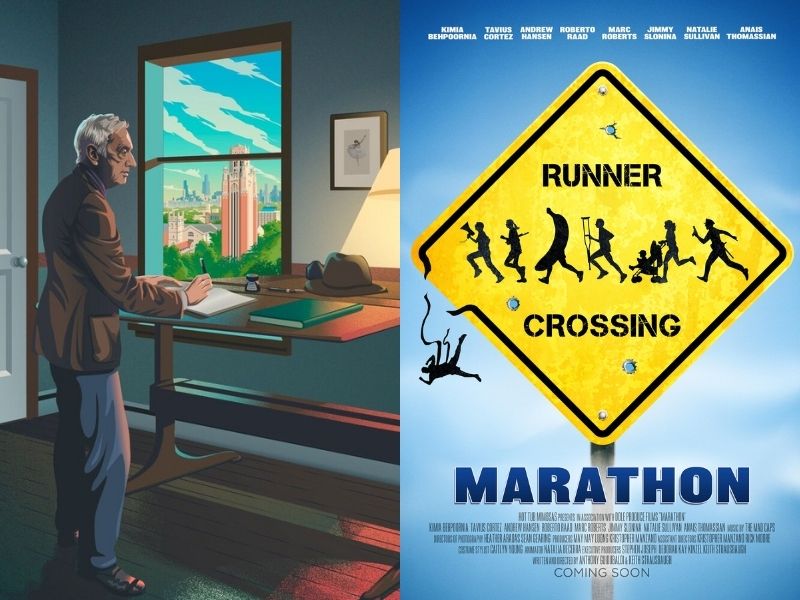 Quack! Quack! A doc and a mock-doc for hot summer viewings

The Adventures of Saul Bellow

Saul Bellow is one of the most honoured writers of the 20th century. Over the course of a literary career that lasted well over a half century, Bellow won three National Book Awards, a Pulitzer Prize and the grandest accolade of all, the Nobel Prize. He ushered in the post-WW2 era when North American Jewish writers like Philip Roth, Bernard Malamud, Norman Mailer, and Mordecai Richler became best-selling novelists. His mixture of street wise argot and up-scale philosophizing hit the critics and the public as being utterly original; at any rate, it was a prose style that freed readers and writers from the hegemony of Hemingway’s stark minimalist approach to storytelling. But who was he as a man? What was his life like?

Israeli-American director Asaf Galay tackles these and other questions in his documentary The Adventures of Saul Bellow. Galay’s film shuttles back and forth between praise and analysis of his novels by such luminaries as Martin Amis, Philip Roth, Salman Rushdie, Charles Johnson and James Atlas and accounts of his private life from his sons Adam, Daniel, and Gregory and wives Alexandra and Janis. Yes, I said wives; Bellow was married five times and fathered four children. He was equally prolific as a writer, producing 14 novels, four non-fiction compilations of essays, letters, and memoirs, three short story collections and one play. Bellow also loved teaching—it’s where he met many of his wives—and taught at Yale University, University of Minnesota, New York University, Princeton University, University of Puerto Rico, University of Chicago, Bard College and Boston University.

That’s a lot to cover in one film so Galay relies on Bellow’s family and literary colleagues to create controversy about Bellow’s life and work. The main accusations about Bellow are that he was a womanizer, narcissist, racist and misogynist. Those aren’t difficult claims to make about a man who married five times, is known to have had numerous affairs, and shifted his political convictions from Trotskyist to right-wing conservative over a long lifetime. His sons from three marriages, Adam, Daniel and Gregory, seem more than a bit chagrined to really dish the dirt about their famous father, but they do stick up for their mothers, who were clearly intelligent and attractive women but eventually broke up with Bellow as his life moved in different directions. Making a better case for the Bellow women is Vivian Gornick, a literary critic who cites passages from Bellow’s novels that do reek of misogyny. Even Bellow’s last wife, Janis Freedman-Bellow, the one who outlived him, admits that she hated the character based on her in Bellow’s final novel Ravelstein. Bellow (in archival footage) admits that his old friend Allan Bloom, the author of the right-wing best-seller The Closing of the American Mind, was upset by Ravelstein. The main character in that book is obviously based on Bloom— and is outed as gay and dying of AIDS. Finally, distinguished Black American writer Charles Johnson points out racist sections in one of Bellow’s National Book Award novels, Mr. Sammler’s Planet.

While that certainly makes a case for not reading Bellow, Galay balances the doc with assessments of his literary work. From Salman Rushdie and Martin Amis, we find out how Bellow’s prose style help to free up modern writing, placing intellectual perspectives into personal narratives. Scholar Hana Wirth-Nesher and others such as Zachary Leader praise Bellow’s mastery of the novel and ability to create such exceptional characters as the titular figure in the novel Herzog, Von Humbolt Fleischer and Charlie Citrine (in Humboldt’s Gift) and Albert Corde (in The Dean’s December). Even more persuasively, the great and even more controversial author Philip Roth speaks of Bellow’s brilliance as a prose writer of genius.

It is probable that a writer like Saul Bellow wouldn’t be as successful today as he was in his heyday. His attitudes towards women and Blacks in his books will make his works controversial forever. But as a prose stylist, novelist and truth-teller during his day, his best books will likely be read for a very long time. Asaf Galay has constructed a solid profile of a top literary figure, from his birth in Lachine, Quebec through his best days in his beloved Chicago to his death in New England.

I love mockumentaries. It’s a wonderful genre, which at its best combines the structure of a documentary with a topic that deserves being satirized. But the form is hard to master since even the best mock-docs usually produce amused smiles rather than out and out guffaws. Perhaps that’s because the form is so artificial that you have to go through a couple of layers of genres—docs and whatever is being parodied—before you can actually laugh at what you are seeing on screen. When they’re done well, mock-docs are like elegant cocktails sipped on a summer porch—perfect and best imbibed slowly. When they don’t work, they’re like fallen soufflés—you can still eat them, but they’re no longer special.

Keith Strausbaugh and Anthony Guidubaldi’s Marathon is the first mock-doc I’ve watched in a few years and it’s great to see a team tackling this evasive form. To a large extent, they follow the format that should be used for such a film. Marathon racing is surely a great topic to satirize: it’s so serious as an event but as one of the actors in the film says, “if anyone can do it, how is it a sport?” I beg to differ. I’ve run 10Ks and have gone as far as half-marathons but never made it to 42.195 Ks, or 26.2 miles in common sporting parlance. Not everyone can do it—I couldn’t–but it’s true that many can come close or make the finish. But there’s a real absurdity in watching runners fetishize their training and what they accomplish by participating in such events.

Mock-docs are famous for their characters, who ramp up the level of pretentiousness and grandiosity by their presence in the film. Most are stereotypes, or variants, which allows the audience to laugh with impunity: we know who they are and don’t particularly like them. In Marathon, Strausbaugh and Guidubaldi have created quite a few amusing people worthy of the comedic treatment. There’s Ryan, an over-the-top serious runner, who wants to get into the Boston Marathon. He’s running at this absurdly cheap marathon at Devil’s Canyon, a dusty hilly region in Nowheresville, so that he can tune up for Boston. Emilou may be the biggest contrast to Ryan—she’s an anti-long-distance runner who has her marathon of TV binge watching on the day of the race. Jenna has entered the race to beat the record for running fastest while wearing a fruit costume and astonishingly she has to contend with Ben, who is also dressed as a Dole banana. The writer-directors use Ben for jokes around product placement and if there’s one truly nasty character in the film, it’s him. Shareef is a well-built Black runner who wants to show his sister that he’s a true athlete. In the film he’s continually harassed while running outside; it’s, if you will, a running joke—and a controversial one. How funny is it to show how Blacks can be treated in the U.S? I like the idea but stopped laughing very quickly but perhaps that was the point. Finally, there’s Abby who is dealing with her first baby’s refusal to say Mama and a husband who is unconsciously racist.

That’s quite a crew. Strausbaugh and Guidubaldi have done a nice job of setting them up and putting them through the paces of a feature film. They create different scenarios for each character but only a few work. It is funny to see Ryan, the rich but unhappily divorced runner fighting constantly with Jay, his cameraman for the supposed doc that is being filmed and getting his come-uppance by suffering a leg injury. Jenna has a passionate affair with the dreadful Ben, which is less hilarious and more awkward. But Abby’s problems with her kid and husband seem absolutely genuine and make you laugh for her. Shareef’s story doesn’t work as well though he emerges as the most likeable character in the film and Emilou isn’t funny enough in her denunciation of marathons.

Anyone who enjoyed Christopher Guest’s films—Best in Show, A Mighty Wind, Waiting for Guffman—will want to see Marathon. It’s not as good as Guest’s mock-docs because the actors lack the improvisatory talent of Catherine O’Hara, Eugene Levy, Parker Posey and Fred Willard but the film will keep you amused—and it is fun to laugh at marathons.