Film Review: John and the Hole and Ailey 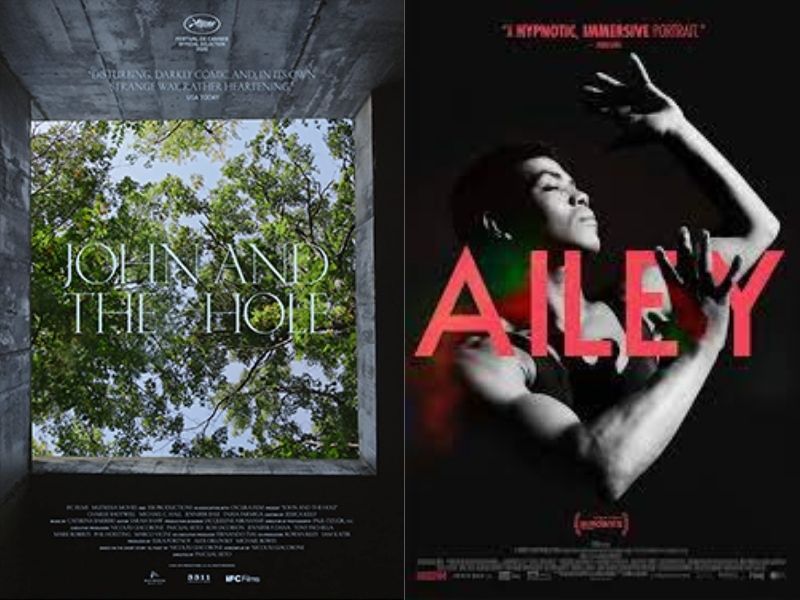 John and the Hole

If we didn’t already know that adolescence is painful and families are dysfunctional, then a lot of non-mainstream dramas wouldn’t exist, nor would festivals like Sundance. The latest entry in this dark but effective genre, John and the Hole, did premiere at this year’s Sundance and is now moving from the festival’s hot house atmosphere to the uncertain world of hybrid cinema/streaming releases we’re now experiencing.

The first feature by Spanish visual artist Pascual Sisto, John and the Hole is understandably imagistic, filled with an ever-darkening mood and atmosphere. John is a teenager—just 13—who seems to be constantly negotiating his space. He does well at tennis, piano and math but doesn’t show anything but trepidation and confusion while accomplishing his tasks. John lives in modernist house in the woods on the outer reaches of suburbia with his cool, accomplished father, brilliant mother and older well-adjusted sister. Dinners are different at their house: it’s almost as if they’re appearing in a play, trying out the parts of parents and siblings. There’s no warmth in their interactions but they say and act as if they really care.

While exploring in the woods, John comes across a large hole, clearly intended to be the basement floor of a building. His parents explain that it was the first part of a survival shelter, which would offer protection to the owners in case of extreme emergency. John just nods but soon we see that a plan has been created. Quickly, his family is drugged and dragged out to the hole, where John deposits them.

What will he do with them? Not as much as we might expect. This isn’t a horror flick; it’s an art film. Think David Lynch, not M. Night Shyamalan. John gets his best buddy, who has moved to another state, to hang out for a weekend of video games and fast food. He lies to the adults who want to know what has happened to his family: easy, silly stories that could be broken if anyone really tried to do so.

In the hole, the family is confused. Has someone forced John to do this? Why isn’t he getting them out? They suffer but John comes around enough to keep them fed—though you can see their confusion is turning into anger. Left to his own devices, John learns to drive and take lots of money out of ATM machines. But, quite frankly, he isn’t half as destructive and anarchic as he could be. Essentially, he seems to be a good kid out on a fairly refined bender.

Pascual Sisto has succeeded in creating a dark cinema-poem inspired by adolescence. The film is as much about the expressive cinematography of Paul Ozgur and the minimalist music of Caterina Barberi as it is an opportunity to watch a very good quartet of actors—Charlie Shotwell, Michael C. Hall, Jennifer Ehle, Taissa Farmiga—explore the depths of a family that is a wonderful contradiction: profoundly shallow. John and the Hole is a carefully crafted mystery within a conundrum–what it tells a viewer is what that person wants to hear.

A feature documentary on the pioneering Black choreographer and dancer Alvin Ailey is long overdue so it’s a pleasure to see that director Jamila Wignot has done a fine job offering viewers a chance to appreciate his art and life. Her film, simply titled Ailey, premiered at Sundance, the historically Indie festival, and is now available for streaming in North America. Though Ailey is long gone, he can be seen and heard throughout the film in archival footage and, in particular, vocal recordings from the last year of his life. In a larger sense, Wignot has imbued the film with Ailey’s presence as a creator whose spirit lives on through his company, which is such a force in contemporary dance.

Apart from the film’s opening section, taken from Ailey’s Kennedy Center Honors celebration, which felt as if a mainstream approach was going to be taken towards the acclaimed dancemaker, Wignot adopts a poetic approach towards her subject. Using the extensive black and white film footage available to her, giving a sense of what Black life was like back then, the director takes us through Ailey’s youth in an impoverished Texas town through adolescence in Los Angeles to the revelation of becoming a dancer with his close friend Carmen de Lavallade in the Lester Horton dance troupe in the early 1950s. When Horton unexpectedly died, Ailey took over the company temporarily before moving with de Lavallade to New York, dancing for shows starring Harry Belafonte and Lena Horne before starting his own entity in 1958. He was only 27 and within three years of forming the Alvin Ailey American Dance Theater, he created two masterpieces, Blues Suite and Revelations. Both celebrate Black culture through dance and music, imbued with passion and purpose, as the best and worst of African America’s past is evoked.

Using colour as well as more black and white visuals, Wignot is able to mesmerize viewers with Ailey’s extraordinary artistry. Here was a figure who dared to represent the pain of slavery as well as the power of the gospel as part and parcel of the lives of Black Americans. Ailey’s company was taken up by the US State Department, which began to sponsor international tours with them by 1962. Always a critical success, it took Ailey and company over a decade to become a well-funded institution, not surprising given the political nature of the work—and the fact that, after all, they were one of the first Black cultural entities in the U.S. and the world.

Wignot chronicles Ailey and the story, often allowing the best footage and the dancemaker’s verbal reminisces to cover an often-complex tale. The director never seems to worry that her biography of Ailey might become too vague since the actual dates and timing of events is often eschewed, allowing for a more poetic understanding of what was happening to the man and the company during these years of success.

Happily, the brilliant Bill T. Jones, arguably the successor to Ailey as the top Black choreographer, is on camera in a cogent interview to offer an understanding of what happened to his precursor in the final years of his life. Ailey was, for many reasons, a closeted gay man, who became ill and died of AIDS in 1989 at the age of only 58. Jones offers understanding to a proud dance pioneer, who felt the burden of representing Black Americans at a crucial time in the US, when civil rights was so important. There’s a compassion in Jones’ appreciation of another gay Black man, who may well have desired to be embraced as a full sexual being but felt he couldn’t do so.

Ailey is filled with tales of him by his former colleagues and collaborators, most prominently the legendary George T. Faison and the extraordinary Judith Jamison. We do get a feeling from them and others of “Mr. Ailey,” the genius, who could be tough and angry but was under the stress of maintaining a dance company and a burgeoning school as well as creating extraordinary choreographic work year by year. It’s no surprise that he cracked under the pressure once and had to be institutionalized—and it’s clear that he fought back to reclaim the Dance Theater and School before AIDS cost him his life.

Jamila Wignot has created a lovely film about Alvin Ailey. It’s a truly moving picture of a master of movement—and should be widely seen.