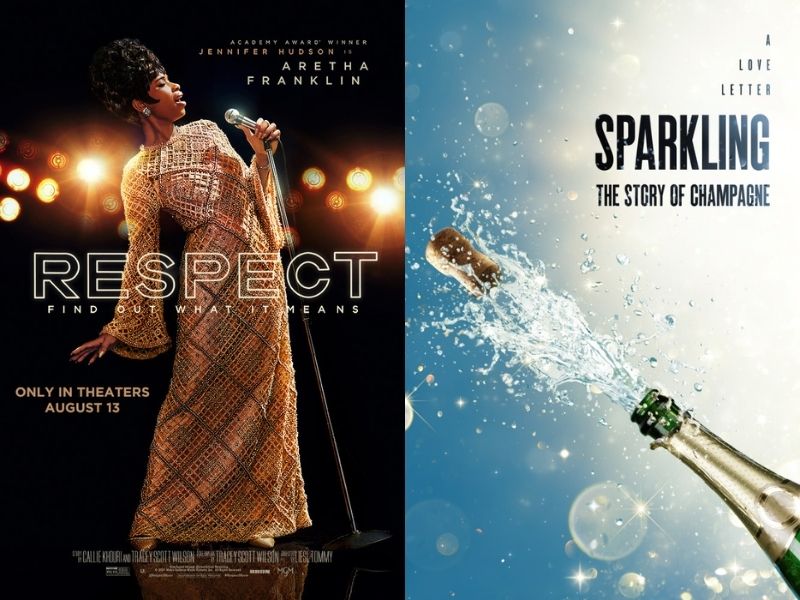 When the young Aretha Franklin switched genders in the lyrics of Otis Redding’s dynamic soul song “Respect,” initially a plea that he be treated well, she transformed it into stirring call for equal rights for women. Franklin’s version not only was her first international hit, but feminists also broadened the appeal, turning into a rallying call during an era of protest marches and rallies. As Aretha once observed, “We all want respect—and should get it.”

Respect, the new Aretha Franklin biofilm, covers her life from 1952, when she was a 10-year-old living with her father and two sisters, to 1972, the year of her celebrated gospel album, a huge bestseller and the subject of its own documentary film. As written by Black American playwright and scriptwriter Tracey Scott Wilson (The Good Negro, Fosse/Verdon) from a story co-written by Callie Khouri (Thelma and Louise), Aretha’s tale is told, like many Hollywood celebratory bios, as a psychodrama, in which an extremely talented person triumphs over demons to become the great artist s/he was meant to be. It’s a journey towards self-respect for Franklin and the demand that others—lovers, record producers, agents, her father—accord her that dignity. In an age of BLM and a welcomed revival of interest in feminism not to mention an increased attention to Ms. Franklin’s great singing, that should make Respect a hit even if most critics—including this one—find the film to be uneven tonally and overly melodramatic on the whole.

Respect begins with a flourish. It’s the early Fifties and the young Aretha sings a bop tune to great acclaim at a party hosted by her father, the famous Reverend C.L. Franklin, minister of the largest black parish in Detroit, and the possessor of a fine gospel voice and brilliant preaching style. This beautiful scene of Aretha singing with just a piano accompaniment, played to perfection by Skye Dakota Turner, is soon followed by horror as she is raped by a man who attends the Reverend’s parties. We never know who the attacker is but by the time Aretha is an adult—and now played by Jennifer Hudson—she is already the mother of two children.

By this point—the early Sixties–she’s living in a strange, nebulous world, not truly a woman on her own: still controlled by her father and dependent for love and support from her grandmother and two singing sisters, Carolyn and Erma. It’s the Reverend who arranges for his Aretha to sign with Columbia Records and its white patrician producer, John Hammond, who made stars of Billie Holiday and Bob Dylan over a decades’ long career. The trouble is that Hammond conceived of Franklin as a jazz chanteuse, complete with strings, horns and American songbook favourites, which are not relatable to Aretha’s life. She wants hit records and a man who can take on her father but ends up with Ted White, a stylish pimp, who abuses her, alienates the Reverend and eventually forces her departure from Hammond.

At this point, at least an hour into the proceedings, Respect finally takes off. White meets Jerry Wexler, a superb rhythm’n’blues and soul producer, who takes them to a studio in Muscle Shoals, Alabama, filled with white good ol’ boys, who, amazingly, play music with feeling and panache. In the best scene in the movie, Aretha slowly figures out how to arrange a song Ted White had brought her, “I never loved a man the way I love you.” Here we have Jennifer Hudson at her best—Aretha’s choice to play her in the film—working out the various parts of the song with musicians who get what she needs and can execute it to perfection. It’s the creative process and filmmaker Liesl Tommy is canny enough to create several scenes to celebrate what Aretha could do to improve a song. In “Ain’t No Way,” a beautiful ballad written by her sister Carolyn, the two figure out the intricacies of the vocals while in the intentional showpiece “Respect,” sister Erma joins her siblings in remaking Otis Redding’s original. Given the bio nature of the film, the way the sisters incorporate “Re” into the repetitive chorus leading up to “Respect” is especially interesting since Aretha’s family nickname is “Re.”

The film traces Aretha Franklin’s amazing rise to success in 1967 and ’68 when she recorded such top-ten hits as Chain of Fools, Think, The House that Jack Built, Baby I Love You, A Natural Woman, and of course, I never loved a man the way I love you and Respect. At the same time, she finally got rid of Ted White and began to assert her independence over her father after their participation in the funeral of family friend and civil rights leader Martin Luther King. Things should have become better then but Franklin descended into heavy drinking and anger while still having hits. Quite frankly, the film wastes about 25 minutes on this bleak period, which has little to do with Aretha’s story beyond the fact that she was still dealing with demons. A fitting conclusion is only reached in the final few minutes when the recording of her gospel record and reconciliation with her father takes place.

Well over two hours, Respect is way too long. But the music is wonderful and kudos must be given to Marlon Wayans, menacing as Ted White; the great Forrest Whitaker, who offers a perfectly thought-out interpretation of C.L. Franklin; Skye Dakota Turner, absolutely mesmerizing as the young Aretha; Audra McDonald, emotionally attractive as Aretha’s divorced mother Barbara and Marc Maron, who totally captures the chutzpah and smarts of Jerry Wexler. That leaves Jennifer Hudson as Aretha, Ms. Franklin’s personal choice to be the legendary soul singer. Hudson is wonderful musically—and that’s a large part of the film. But Respect is the kind of melodrama, which in the right hands, could win an acting Oscar. Hudson doesn’t do it. I can’t imagine anyone replacing her but that “carpe diem” moment passed her by.

Should you see Respect in theatres? I did. It was the first press screening I attended in nearly two years. (Thank the Lord and the Internet for screener links!) Is it worth it? The music will be better and so will be the big emotional scenes. If you’re ready to take a chance, Respect may be the answer for you.

Sparkling: the Story of Champagne

“I only drink Champagne on two occasions, when I am in love and when I am not.” –Coco Chanel

“I could not live without Champagne. In victory I deserve it. In defeat I need it.” –Winston S. Churchill and Napoleon Bonaparte

Who doesn’t love champagne? Many of us adore its sparking nature, wonderous bubbles and frothy taste. Of course many don’t—quite frankly, if you don’t delight in carbonated water, count yourself out. While that eliminates a lot of the population, it’s part of the charm of champagne. Not everyone should love it or it wouldn’t be special. If you adore Evian—and I’ve always enjoyed that the word turns into “naïve” backwards—then you’re a good candidate for the best of sparkling brews. Start with bubbly water and move on to the harder stuff. If not, there’s always beer.

Irish producer Frank Mannion has come up with a brilliant lifestyle idea in making a doc on champagne. The filmmaker got to meet and drink with champagne aristocrats, inheritors of massive estates which produce the effervescent libation, who were more than willing to share a drink and a thought or two about their livelihood. The affable Mannion imbibes the finest champagne with such notables as Vitalie Taittlinger, Bruno Paillard and Jean-Baptiste Lecaillon, all of whom have tales about their families and how they started to produce champagne.

Mannion gives us the origin story of champagne, starting with the championing of twice fermented grapes by the Benedictine monk Dom Perignon (1638-1715). He lived in the northeast of France and improved wine cultivation techniques including figuring out how to keep the bubbles in the nascent vintage we would now call champagne. It was Dom Perignon who is reputed to say, “I am drinking the stars!,” when he imbibed the twice-or even thrice-fermented fruits of his labours. Very quickly, families in the region began to produce champagne, such as Krug, Pommery, and Bollinger. Champagne came to the royal court of France when the Duc d’Orleans, the regent of Louis XV, embraced it in 1715. Soon, it was all the rage in Paris and remained so during the reigns of Louis XV and XVI. The French Revolution only briefly halted the popularity of champagne; happily for those who love the drink, it was wholeheartedly embraced by Napoleon, who insisted on having batches of it sent to his troop leaders—and himself—before going to battle.

We get the potted history of champagne over Mannion’s touristic visits to the grand homes and estates of France’s glorious sparkling wine producing region. Eventually when even the greatest admirer of champagne has likely hit their surfeit of interest, Mannion musters up a bit of a controversy concerning the English involvement with the drink they have adored for generations.

It turns out that Queen Elizabeth has created a vineyard, which launched its own chardonnay champagne in 2017. Mannion interviews the Laithwaites, who have worked with the Royals to create the distinctively British champagne. Winston Churchill’s love of champagne, particularly Pol Roger, is evoked and his grandson Sir Nicholas Soames even adds his gravitas by appearing in the film. Will the Brits overtake the French in the production of champagne? While we’re at it, how about the Canadians?

While Sparkling: the Story of Champagne is hardly a tough topic for a documentary, it does allow viewers to enjoy the wonderful drink. This reviewer doesn’t indulge in champagne as much as Chanel and Churchill did but I will confess that a bottle of Canadian prosecco was consumed while writing this piece. I had a good time and if you enjoy the divine bubbly drink, you will have fun watching the film. And remember not to let the cork pop!