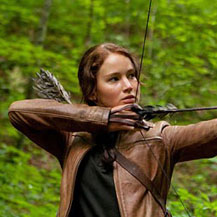 The buzz
Over the top. The release of the film of Suzanne Collins’ best selling novel is the most highly anticipated event of the spring. TV entertainment journalists, bloggers, magazines, newspapers—all media—have been covering this new film for weeks.

The numbers for Collins’ first book in her trilogy—yes, there will be two more movies—are astonishing. Millions of copies of the book have sold and the e-books have been just as exceptional. The Hunger Games has been on the NYTimes bestseller list for years.

The Hunger Games trilogy is a phenomenon on the level of the Twilight and Harry Potter books. The films will surely be as successful at the box office.

The premise
In a dystopian future after an apocalyptic global war, the Capitol controls the country called Panem. Since a civil war in which District 13 was destroyed, the other 12 formerly rebellious districts work slavishly for the better glory of the Capitol. Every year, the Capitol sponsors epic Hunger Games in which two adolescents, one boy and one girl, are chosen to fight to the death in a designated rural area controlled by a high tech team, which ensures that the “hunger warriors,” who can hide at first, must eventually face each other in mortal combat.

Katniss Everdeen, a tough country girl volunteers to participate in the Hunger Games to save her sister Prim, who has been chosen by lottery to represent their coal rich District 12. Peeta Mellark, a boy who has secretly had a crush on Katniss all his life, accompanies her. Their mentors are the alcoholic Haymitch Abernathy, the only District 12 victor in the Games, and the frivolous Effie Trinket.

Arriving in the Capitol, which looks like a futuristic version of ancient Rome, Katniss and Peeta are fed and groomed and clothed beautifully in anticipation of their appearance on a TV show hosted by

Caesar Flickerman. There, they are supposed to elicit sympathy from the Capitol’s audience, which can send “care packages” while the fight is taking place. Peeta confesses his love for Katniss, which gets them massive support.

When the games begin, the 24 combatants are transported to an idyllic forested area, with streams and hills and caves. Rushing to grab weapons, a blood bath occurs and nearly half are wiped out. The rest flee. More fights ensue as Katniss hides alone while Peeta works with a team of top warriors bent on wiping out the rest of the opposition.

Eventually, Katniss and Peeta team up as an announcement is heard pronouncing a rule change–a couple from one district can be the “winner,” not just one warrior. What will happen to Katniss and Peeta?

And how will their story impact on the reign of President Coriolanus Snow?