The Odd Life of Timothy Green 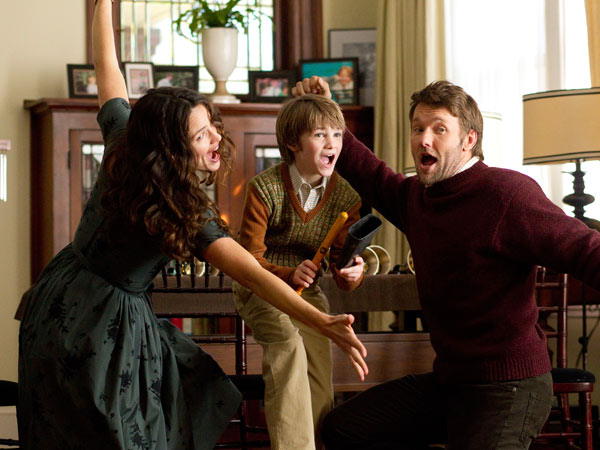 The Odd Life of Timothy Green

The buzz
A $40 million dollar film produced by Disney based on a fantasy story by one of Frank Zappa’s kids? That’s bound to create buzz. Add to that the bizarre concept of the film: a childless couple suddenly discovers an 11-year-old boy, who appears to have grown in their garden. Some folks get broccoli, some get roses, but the Green family get little Timothy. Magnify the buzz—and hope that Uncle Walt isn’t turning in his grave.

The premise
Cindy and Jim Green are living the American dream. They have a lovely home in a small town, love each other and work hard. Their only problem? They want kids and can’t conceive. One dark and stormy night, their problems are solved. Out of their cabbage patch (well, maybe it’s a vegetable garden) emerges young Timothy. It’s hard to explain having an 11-year-old show up at your door but somehow the Greens pull it off—this is a small town in a Disney film—and Timothy is accepted as their boy.

The only thing he has to cover up physically are his leaves—yep,  young Tim has greenery on his legs. Pretty soon, he’s at school where two quite different stories emerge. Timothy Is not the all-American boy—he’s terrible at soccer but keeps on trying to play it anyway.  But belying the loser image that his lack of athletic prowess implies, he’s become the best friend of a resolute, artistic girl named Joni.

The small town where the Greens live is known for manufacturing pencils. Timothy’s “dad” Jim’s livelihood is based on working in the pencil factory and his “mom” works at the pencil museum. (If this feels like a premise from a 1930s Frank Capra movie like Mr. Deeds Goes to Town, you’re not wrong.) Rumour has it that the factory may close (Frank Capra meets Michael Moore’s Roger and Me). Good ol’ American ingenuity may be necessary to keep the lead in the economy of this town’s pencil industry and the Greens work hard at resolving the problem.

The Greens have family problems as well. Turns out that Cindy’s sister Brenda Best (get it?) has a perfect family with athletic kids. And Jim has never gotten over the rejection he got from his dad James Sr., because he wasn’t a great athlete.

The burden on our odd young hero is huge. Timothy has to save the town’s economy, persuade James Sr. to accept his son and do well enough to out-best his “mom”’s sister’s family. Can he do it? Hey, Disney spent $40 million on this movie; don’t expect me to tell you how it all comes out!

The performances
The very talented Lois Smith shows up briefly as funny, practical Aunt Mel; she’s fine as is veteran character actor M. Emmet Walsh as her slightly dotty husband, Uncle Bub. The underrated David Morse, whose tall, laconic presence has illuminated such disparate films as von Trier’s Dancer in the Dark, Bigelow’s The Hurt Locker and the cult classic The Green Mile, is very effective as James, Sr. In another small role as the town’s matriarch Diane Wiest is fabulous.

But the parents, essayed by Jennifer Garner and Joel Edgerton, are merely serviceable: there’s no chemistry between them and precious little is projected by them towards newcomer C.J. Adams as Timothy. As for C.J., he’s good but doesn’t astonish us. And, quite frankly, he needed to be remarkable to make this film work.

The direction
As advertised, this is an odd film. Peter Hedges wrote and directed Odd Life, so he must be responsible for its strange mixture of fantasy, small city politics and dysfunctional family relationships. It doesn’t add up aesthetically but one senses that Hedges may be building towards stronger films, which would marry tough topics, in the future.

The skinny
This is one peculiar film. It won’t be a hit and it’s only an OK date movie experience. But The Odd Life of Timothy Green feels like a sincere effort made with lots of interesting material, which, sadly, doesn’t cohere into a dramatic whole. But I bet people will catch it on pay-TV or cable-TV and really enjoy it.