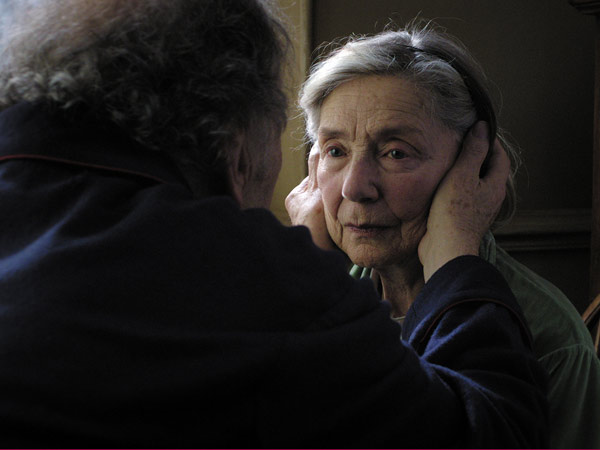 The buzz
This devastatingly beautiful chamber drama about old love and mortality has been nominated for five Academy Awards: best picture, best actress (Emmanuelle Riva), best original screenplay (Michael Haneke), best director (Haneke) and best foreign film. Amour has been hailed since its premiere at Cannes last spring, where it won the Palme d’Or. Since then, it’s garnered U.S. critics’ prizes from Los Angeles to New York while at the European Film Awards, Amour swept the major categories—film, director, actor and actress.

The premise
Georges and Anne, a sophisticated Parisian couple who both taught classical music, are leading a quietly satisfying cultural life when illness strikes. Anne begins to suffer a series of strokes that debilitates her, forcing Georges to take on most of her care. He refuses the help of their daughter Eva and fires nurses, isolating himself from most encounters with society. Eventually, Anne’s strokes rob of her of speech and much cognition and leave her in a great deal of pain. Having spent all of his adult life with Anne, Georges decides to draw a close to their pain and sorrow, in a final act of love.

The performances
This is a film that absolutely depends on performance: the most delicate emotions must be conveyed with the most minimal of gestures. Haneke chose a dream cast: Emmanuelle Riva, a strong presence, most famous internationally for her brave nuanced performance as the lover in Hiroshima, Mon Amour; Jean-Louis Trintignant, the thinking man’s Bogart in such classics as Z and The Conformist and Isabelle Huppert, twice a winner at Cannes for best actress including her collaboration with Haneke in The Piano Teacher.

The trio is among the most rigorous, classical trained theatrical and cinema performers in the world. There are no false steps, no histrionics. They compel you to understand the grief their characters are encountering—and most of it is done with silence.

The director & writer
Michael Haneke is a brilliant artist, whose career hearkens back to the Golden Age of auteur cinema in the 1950s and 1960s. Like Rossellini, he eschews effects, preferring to offer the unvarnished truth; like Bergman, he is overwhelmingly concerned about morality and ethics and like Godard, he is always critically engaged with intellectual matters. He seems to have a lock on the awards at Cannes. Haneke has won the Palme d’Or twice, for The White Ribbon and Amour, the Grand Prix for The Piano Teacher and personally garnered a best director prize for Caché.

The skinny
This is one of the finest films of the decade. True, it doesn’t offer easy solutions to difficult problems but it is beautifully shot and performed. I urge you to see Amour.