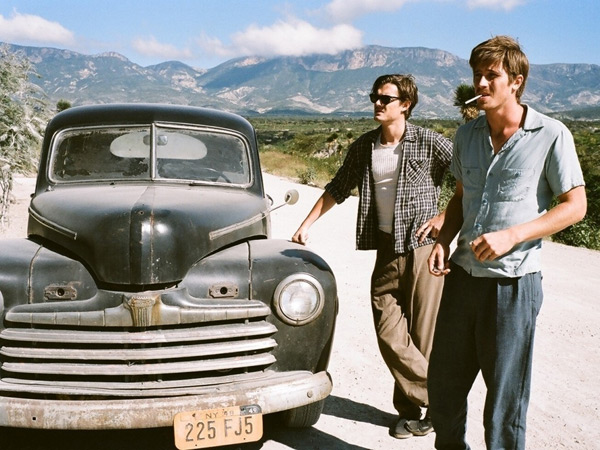 Note: first name is the one used in the film and novel; the second is who they are based upon.

The buzz
At last Jack Kerouac’s “unfilmable” Beat classic novel On the Road, about writer Sal Paradise and his best friend Dean Moriarty’s restless journeys across North America in search of truth, kicks and sex, has been made into a motion picture. Kerouac wanted Marlon Brando to play Moriarty as early as 1957. Nearly 40 years later, Francis Ford Coppola wanted to cast Ethan Hawke as Paradise and Brad Pitt as Moriarty in a script he devised with his son Roman.

Now, the film has been made by Walter Salles, the director of the terrific Che Guevara memoir The Motorcycle Diaries. Kerouac’s brave counter-cultural book has ended up being directed by Salles, a Brazilian, written by Jose Rivera, a Puerto Rican and shot mainly in Montreal, the Gatineau and New Orleans. Clearly, it’s a story with international impact.

Sal, Dean, Marylou and Carlo go to parties, smoke reefer, talk about life and fairly quickly have sex—gay, straight and as threesomes. They’re not alone. Some members of the young generation growing up in post World War Two America are seeking something new: they’re dissatisfied with the promise of a conventional, unexamined life. Sex, drugs, music and the lure of the road offer them the chance to connect with life in a cutting edge, dangerous way.

(Not named yet, they are the “Beat Generation” but it will take ten years and the publication of Kerouac’s novel and Allen Ginsberg’s poem Howl to express their identity to the world.)

Over the next two years, Sal and Dean spend much of their lives “on the road” between Denver and New York with memorable stops in Mexico and New Orleans. During that time, Marylou divorces Dean, which doesn’t stop their relationship for quite a while. Dean, in turn, marries Camille, who has his baby, but is driven nearly mad by his adolescent ways. Dean often finds himself without either woman. Carlo falls for Dean but their relationship never seems to impact on Moriarty’s various heterosexual affairs. Sal has a serious interlude with a Mexican girl, spends time with Marylou—but is mainly interested in writing.

On a sojourn to New Orleans, they spend time with the philosophical junkie writer Old Bull Lee and his deranged wife Jane. In another trip, they spend a decadent time in Mexico until Dean abandons Sal, who is sick with fever, to return to Colorado.

In the end, Sal returns to New York, to his beloved “mere” (Quebecois via Massachusetts) mother to write On the Road. Dean is left to wonder what he will do next.

The performances
A mixed bag. Absolutely outstanding are Viggo Mortensen as Old Bull Lee, a bizarre character given to diatribes who is also a loyal friend, and Kirsten Dunst, who seems to embody Camille, Dean’s second wife, and has a face and look that seems perfectly Forties. (You can imagine her in a photo with Veronica Lake and Lauren Bacall, looking like their blonde cousin).

Problems arise with the main trio: Garrett Hedlund, Sam Riley and Kristen Stewart. They’re all fine—but none of the performances can be called “the stuff of legends.” And that’s not good when Hedlund (Dean) and Riley (Sal) are playing iconic figures. Hedlund is handsome and charismatic but he never persuades as a would-be madman poet/memoirist. Neither does Riley, who actually did pull off the startling feat of playing the doomed British singer Ian Curtis in Control five years ago. It’s a case of second time unlucky for Riley who doesn’t embody the passion of the young Kerouac.

Kristen Stewart suffers in comparison to Kirsten Dunst. She doesn’t have a Forties look or style, so she often looks jarringly out of place—and time—in the film. It’s easy to slag Stewart, who achieved worldwide stardom in the Twilight series. Kudos to her for attempting the part but she isn’t Marylou.

The creative team
Walter Salles and Jose Rivera previously worked together on The Motorcycle Diaries, which was a very successful road movie set in South America in the 1950s. Clearly, On the Road is personal project for them—and an amazingly accurate follow-up to the earlier work.

They brought many good things to the film: an authentic sense of the period, an appreciation of Beat literature and sympathy for the counter-cultural movements in the US during the ‘50s and ‘60s. Kerouac’s language is respected, as are the attitudes and ideas of the period.

But something went wrong. Perhaps Salles and Rivera were too reverential. This film rarely takes off: for a “crazy” film, it lacks passion. And unique camera angles. And amazing performances.

The skinny
I loved On the Road as a late adolescent. I remember nearly memorizing lines from the book and imagining what it would have been like to be Sal Paradise going on those amazing journeys across the US.

And I believe that Walter Salles, Jose Rivera and many of the creative people involved in this film approached On the Road with respect. Perhaps that’s the problem.

Salles’ film should be crazy, almost offensive, but good-hearted. Instead, we have an On the Road for classrooms and curatorial rhetoric. More’s the pity.