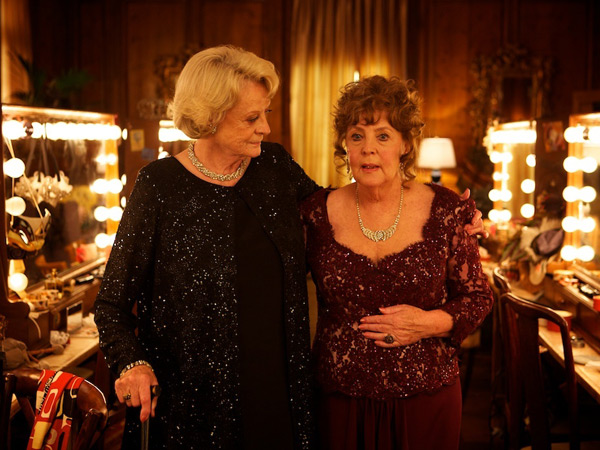 The buzz
For the media and the public, this is an actor’s delight. Quartet puts together Dustin Hoffman, directing his first feature, with acclaimed thespians Maggie Smith, Tom Courtenay, Billy Connolly, Pauline Collins and Michael Gambon in a tale about a retirement home for performing artists.

The film has unique parentage: a West End play of the same name by Ronald Harwood and Tosca’s Kiss, an award-winning documentary.  It has attracted attention from Zoomers and film aficionados.

The premise
Former opera singers Reg Paget (Courtenay), Wilf Bond (Connolly) and Cissy Robinson (Collins) find their comfortable lives in Beecham House, a performing arts retirement home turned upside down by the arrival of diva Jean Horton (Smith). At one time, they had formed a popular operatic quartet but that ended when the marriage between Reg and Jean abruptly came to an end. After that, Jean went on to great fame while the others did moderately well.

A fundraiser for the House is held on Verdi’s birthday each year and the event’s director Cedric Livingstone (Gambon) realizes that the show will be a hit–and help the retirement house get out of debt—if the quartet was reunited after many years. Jean refuses, forcing the rest of the trio, including her ex, Reg, to try to persuade her. Will they succeed? And will love flourish again within the walls of Beecham House?

The performances
The heart of the matter. Well, that and the music.

Hoffman directing Smith, Courtenay, Connolly, Gambon and Collins—what do you expect? None of these distinguished thespians is pushed out of comfort zones. They’re encouraged to enjoy their roles and create a sweet, ensemble piece. In the film,each is in the midst of a revealing or dramatic situation: Courtenay is harbouring a not-so-secret sorrow, which only Smith can resolve; Gambon is amusingly tyrannical as the theatre director; Connolly has suffered a stroke, which allows him to speak uncensored (and often quite rude) thoughts; Collins has early dementia or Alzheimer’s and Smith is a diva who has to come back to earth and accept love.  The quintet is uniformly excellent.

So is the music—a nice mix of Verdi, Gilbert and Sullivan, Rossini and others.

The creative team
Dustin Hoffman’s directorial debut is a success. It’s unclear what he did, apart from encouraging great actors to enjoy themselves without appreciably over-acting—but that’s an important element to achieve.

Ronald Harwood is a wonderfully versatile author, who has written over a dozen plays, half a dozen novels, essays, biographies and nearly 20 screenplays. Most noted for The Dresser, which was written as a play and then memorably adapted for the screen, he has also contributed scripts for such notable films as Being Julia, The Diving Bell and the Butterfly, The Pianist and A High Wind in Jamaica.

Like The Dresser, Quartet started off as a play on the West End starring (among others) Donald Sinden and, once again, Harwood has created a bulletproof script for the film.

The skinny
Once again, a Zoomer hit has emerged! Quartet is a film that listeners to The New Classical 96.3fm should universally embrace (apart from the occasional curmudgeon). This film addresses love and friendship in the “golden years” with wit, compassion, melodrama and romance. It’s beautifully acted with splendid music. As my Yiddish bubbe would have said, “What’s not to like?”