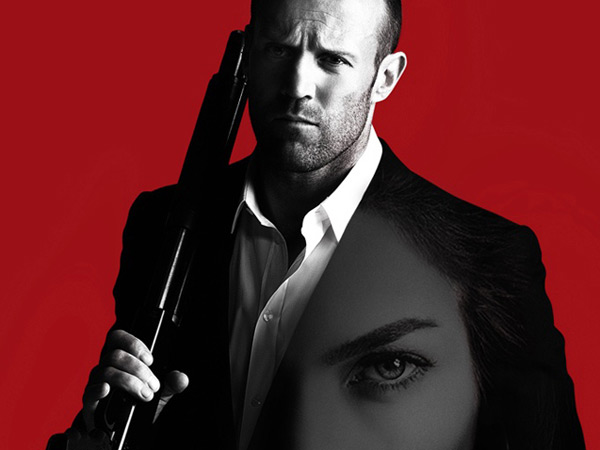 Yes, both of these things take place in Parker, a thriller based on a character written by Donald Westlake aka Richard Stark, a novelist who won three Edgars, the highest accolades in the mystery genre. Films adapted from Westlake or Parker novels include Point Blank, The Hot Rock and Payback; he also wrote the Oscar nominated script for The Grifters.

Fans of celebrities, action heroes and cult novelists have a real interest in this film.

The premise
Parker (Statham) is a hard nosed thief with a taste for a violence and an odd personal code. He hates hurting innocent people but has no problem killing those whom he thinks deserve to die.

After a heist he has organized goes wrong, Parker is double crossed by his gang, who leave him for dead off the side of a country road. But nothing can stop Parker. Barely awake in a county hospital, he evades the police, steals an ambulance and robs two security guards in rapid succession.

Soon, he’s in Florida, with a new identity and lots of money, looking for his former gang. But he’s also alerted the gang and the Chicago mob, all of whom are out to get Parker.

Enlisting the help of an underemployed and rather desperate real estate operator (Lopez), Parker takes on the mob and his old gang after they pull off a rather nifty art heist on their own.

The performances
For the first ten minutes of the film, the tough talking Brit Jason Statham dons a wig, a soft Mid-American accent and a collar—yep, he plays a priest. And he’s surprisingly good at it. Later in the film, he tries to pull off a Texas accent and is just woeful.

Throughout the film, you can see that Statham is trying to be more than just the “paint by numbers” action hero he usually plays. The effort is there but, quite frankly, he doesn’t really pull it off. He is—apart from that remarkable opening—Jason Statham. Great for his fans but he hasn’t extended his reach.

Jennifer Lopez extended her reach decades ago with films like Out of Sight and Selena. We all know that she can act if given the opportunity. The trick here is that she’s supposed to play a deglamorized role. And that’s tough for Ms. Lopez to do.

She’s up for it, of course. But Lopez without glamour or sexiness is like a pianist with her hands tied behind her back. There’s not much she can do. There’s a scene where Statham as Parker has to check that she isn’t wearing a wire recording their conversation and it’s nice to know that Lopez hasn’t lost her looks. But the irony is that Parker’s moral code also doesn’t allow for cheating—and he’s madly in love with someone else. Oops.

The creative team
John J. McLaughlin does a nice job adapting one of Westlake’s “starkly” tough novels. The character fits the Parker image snugly and the convoluted plot is recounted relatively well. Of course action sequences are extended throughout the film—but this is a Statham flick and that was to be expected.

Taylor Hackford’s direction is fast paced and functional. He’s an old pro, who has delivered the goods on many films from An Officer and a Gentleman to The Devil’s Advocate to Ray. But he’s had flops, too.

Remember Love Ranch, Blood In Blood Out or Proof of Life? Didn’t think so. On the whole, Parker is likely to be neither a hit nor a miss, just a middling success, shepherded through by one of Hollywood’s own, the President of the Directors Guild of America.

The skinny
Parker is a good, efficient thriller. And it’s that kind of film that genre lovers will enjoy. If there’s something annoying about this film—and there is—it’s that nothing personal or genuinely quirky or artistic breaks through Parker’s commercial sensibility.

Westlake has inspired better responses in the past. John Boorman’s Point Blank was an odd, brilliant, disturbing Sixties noir thriller. The Hot Rock was a funny caper film from the Seventies that starred the young Robert Redford. Heck, even Jean-Luc Godard, the French auteur, got in the act, creating one of his more interesting films, Made in USA, around one of the Parker books.

Taylor Hackford didn’t go for that kind of film. He even contrived to misuse two fine character actors, Wendell Pierce and Bobby Cannavale, by casting them in minor, uninteresting roles. Pierce, who was marvelous in The Wire and Cannavale, mesmerizing and disturbing in Boardwalk Empire, are given nothing to do. It used to be that film noirs would effectively employ character actors. No more—sad to say. No more.