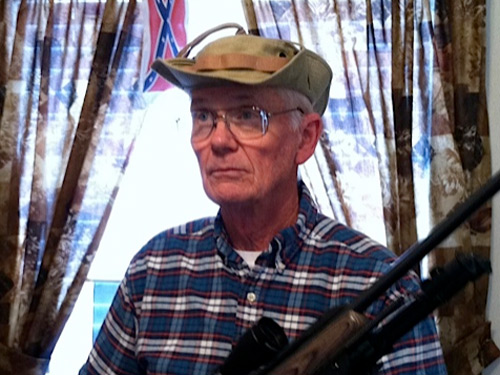 What’s the proper response to evil? Should you just denounce someone who has done terrible things? Or should you try to figure out what makes them tick—and in the process, find out more about them and possibly change their minds and emotions?

Paul Saltzman’s The Last White Knight puts these philosophical and moral thoughts into play in a documentary that reminds one of the liberal/radical bedrock values of the form itself.

When Saltzman was a young man, he left Toronto to go to Mississippi to join the Student Non-Violent Coordinating Committee (SNCC) to register disenfranchised African Americans for the vote in the white segregated South.

It was 1965 and he was, quite literally, taking his life in his hands. In 1963, the most prominent Black Mississippian Medgar Evers was assassinated for espousing the Civil Rights cause. In 1964, two Jewish Northerners, Schwerner and Goodman and the Black Mississippian James Chaney were killed for trying to register voters by men dressed up as members of the Ku Klux Klan.

Within days of his arrival, Saltzman was arrested on trumped up charges by the Mississippi police. While in jail, he smuggled out letters about his situation in the South—and they made front page headlines in the Toronto Star. Soon after his release, Saltzman was assaulted next to the entrance of a courthouse by a tough bruising Southerner named Byron “Delay” de la Beckwith. Saltzman outran Beckwith and his friends after being hit. He continued to work for SNCC that summer.

42 years later, in 2007, Paul Saltzman met “Delay” de la Beckwith for the first time since their violent encounter during the summer of 1965. Over the course of the next five years, Saltzman and de la Beckwith met many times to discuss the Civil Rights movement, the Ku Klux Klan, the de la Beckwith clan and the changes that have happened to the American South since those perilous but stirring times.

In talking about the de la Beckwiths, Saltzman was able to find out more about “Delay’s” daddy Byron de la Beckwith, Sr.—the man who was convicted of the murder of Medgar Evers. “Delay” feels that his father was unjustly convicted: that he was there but someone else shot Evers. It may be one of “Delay’s” reasons for speaking so candidly to Saltzman. Certainly, curiosity was another factor. Like many of us, “Delay” must have been surprised to meet Saltzman and find him to be an eminently reasonably and  gentle man.

The Last White Knight offers us a profile of “Delay” de la Beckwith, a Ku Klux Klan member—a White Knight—who is willing to talk about his life and about his notorious father. Saltzman’s approach can be criticized but it’s clear that this film and the understanding that the audience develops of de la Beckwith would never had occurred if a “non-violent” sensibility hadn’t been making the documentary.

Interviews with Morgan Freeman and especially Harry Belafonte offer the best counter to de la Beckwith: anecdotes of being Black in Mississippi aren’t pretty ones. Most gripping is a story that Belafonte recounts of a car ride down a country ride “accompanied” by Klansmen that he and film star Sidney Poitier took during those days. They survived the trip but, as we know, others weren’t so fortunate during those times.

As for “Delay” de la Beckwith– did Paul Saltzman change him? The two men shake hands near the end of the film—unthinkable 45 years ago. But is “Delay” a changed man or simply a charming Southerner who is still a White Knight? Judge for yourself. Paul Saltzman has made a remarkable film from an ethical point-of-view: The Last White Knight challenges viewers in complex and moral ways.