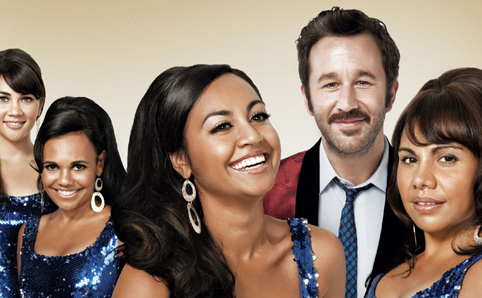 Wayne Blair, director
Keith Thompson and Tony Briggs, script based on Brigg’s play and inspired by real events in the lives of his mother, aunt and friends

The Buzz
This uplifting tale of four indigenous Australians who form a soul singing girl group to tour Vietnam during the late ‘60s was the biggest hit last year in its home country. Not only did it gross over $14 million Aussie dollars in its first three months as a commercial release, it practically swept the Australian Academy Awards, winning eleven prizes including Best film, actor, actress, direction and script.

The Premise
It’s the late 1960s and Irish roustabout Dave Lovelace is playing piano and searching for talent in rural Australia when he spots the real thing, Cynthia, Gail and Julie, three Aboriginal sisters singing their hearts out to country music. They don’t win the local talent contest because the judges are racists but the girls get Dave, who drives them home and eventually persuades their mother and father to let them be their manager and get them jobs singing to the US military troops in Vietnam. Joined in the city by their half-white cousin Kay, the four are trained in a whole new repertoire, soul music and quickly turn themselves into The Sapphires.

Just as quickly, they’re in Vietnam, singing to highly receptive US soldiers, performing beautifully behind a tight knit instrumental quintet. Romance erupts while bullets fly: Kay becomes infatuated with a soldier while Gail and Dave fall in love. Meanwhile, Kay and Gail have to deal with racism from their homeland. Being of mixed-race, Kay was officially stolen from her Aboriginal land and taken to live with whites in the city. Gail has never forgiven Kay for acting haughty towards her when she came back for her biological mother’s funeral.

Besides this important issue, there is a war going on—one that’s actually heating up while the Sapphires are on tour. During their last concert, the Viet Cong invade the town they’re in; while the Sapphires escape, Dave is hit by bullets and is left for dead.

Will Dave escape from his apparently grisly fate? Will the Sapphires perform again? Hey—never give away an ending!

The Performances
Chris O’Dowd is terrific as Dave Lovelace, a hard drinking, fast talking Irishman, who is all charm, until he meets his match in Gail, a tough, sharp as nails, passionate woman, who will defend to the death her sisters and her right to have her own opinions. While Deborah Mailman’s Gail is a fine match for O’Dowd’s character, it is the Irishman who really makes this film work. He controls scenes with his effortless bravado. You never know whether O’Dowd will play a scene for comedy or drama, or simply switch emotions in mid-gear. He’s been fine as a supporting cast member in Bridesmaids, This is 40 and the TV series Girls but here he’s the lead and O’Dowd rises to the occasion.

Also notable in much smaller roles are Shari Sebbens as Kay and Miranda Tapsell as Cynthia, the youngest of the sisters and the one with the best voice.

The Creative Team
The Sapphires has a great premise—young Aboriginal women growing as individuals by forming a singing group and playing in Vietnam. With war and racism as hard-edged backdrops and the great soul music of the Sixties in the air, this film always feels like a winner.

Kudos must go to Tony Briggs who had the wit to realise that his mother’s stories about singing in Vietnam as a young Australian aboriginal would strike a chord with an audience. The Sapphires morphed into a play and now a film.

Unfortunately, Briggs’ creative partners, director Wayne Blair and co-scriptwriter Keith Thompson don’t have the wit to genuinely expand on Griggs’ premise. They don’t represent the war in Vietnam very well and the characters of the sisters—Gail apart—never get to grow.

The Skinny
Who isn’t going to like the idea of an Aboriginal soul-singing group touring Vietnam—and finding themselves in the process?

With so much going for it, The Sapphires is bound to be good entertainment. But the film’s writers and director aren’t spry enough to let the underlying elements of war and racism play out around a moving tale of young women reaching adulthood through making music.

Crucially, the foursome who make up the Sapphires don’t get to sing in the film. Only one, Jessica Mauboy, sings. This means that the singing, which should be the emotional pay-off of the film, is undercut by lip-synching to a very slick group of professional musicians. No doubt the sound is better but by losing authenticity in the music the film sells its group dynamic short. We should feel for these players—and we don’t.

The Sapphires is still great fun. But it could have been the Australian version of The Commitments, a wonderful Irish-British film, that used soul music to portray poor but musically gifted young Irishmen and women, in writer Roddy Doyle’s inelegant phrase as “the niggers of Europe.” Doyle’s brilliant book and script had much to say; sadly, The Sapphires lacks its own hard-edged poetic author.