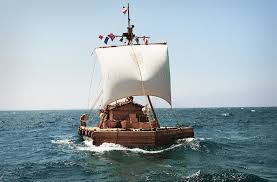 Thor Heyerdahl is a legendary figure, an adventurer and social scientist who galvanized the world in 1947, when he sailed a small balsa raft dubbed Kon-Tiki with a 5-man crew from Peru to Tahiti, 3,770 nautical miles (c. 6,980 km (4,340 mi)) in 101 days. Heyerdahl’s intention was to prove that South American indigenous people settled Tahiti, not Asians. No one is entirely sure that he’s right—in fact, most anthropologists disagree with him—but that didn’t matter in those bleak post-World War Two years. Heyerdahl’s feat showed that people could do crazy, inspiring deeds—and live to tell the tale. The Kon Tiki story has been generating buzz for over 60 years.

Joachim Ronning and Espen Sandberg’s faithful rendition of the Kon-Tiki adventure has garnered great praise: it’s been nominated for the Best Foreign Film Oscar and Golden Globe (losing both to Amour) and generated the highest box office results in Norway for a native film—over $14 million dollars.

It’s 1947. Thor Heyerdahl, a Norwegian ethnographer and scholar, wants to popularize his radical idea that ancient dwellers in Peru sailed across the ocean to Polynesia and settled the area. With some support from the US and Peruvian governments and private donations, he’s able to assemble a five-man crew of Scandinavians to travel on a raft across the Pacific to Tahiti.

Heyerdahl’s theory is based on the notion of a southerly stream that will propel the raft from Peru southwestward. For quite a while, the Kon-Tiki takes the crew northerly towards the Galapagos Islands, which are notoriously disastrous to navigate. Sharks hover around the sea craft, creating tension while the men, in extremely close quarters have to figure out a way to deal with each other.

Throughout, Heyerdahl remains steadfast in his belief in using old materials such as balsa to keep the raft afloat. Eventually, his patience is rewarded as Kon-Tiki takes them towards Micronesia.

The script doesn’t build up the characters but it’s fair to observe that Pal Sverre Valheim Hagen gives the proper resolute quality to the “character” of Thor Heyerdahl. Anders Baasmo Christiansen is fine as Herman Watzinger, the odd man out in the story, who had to learn how to live and work on the boat. Odd-Magnus Williamson (Erik Hesselberg) and Agnes Kittlesen (Liv Heyerdahl) also acquit themselves well in supporting roles. But no one stands out—thanks to the script, not to the actors.

Joachim Ronning and Espen Sandberg know how to create meticulous historical dramas writ large. Their last film about anti-Nazi resistant leader Max Manus: Man of War was a huge hit in Norway and did well in Europe. They can create a sprawling epic and make it look glossy and understandable.

But is the complexity of the Kon-Tiki tale delivered?

Kon-Tiki is a relatively big budget epochal tale of men at sea. (The budget might pay for a week of shooting Iron Man 3). The film’s historical scenes work well and the sense of Heyerdahl’s desperate desire to become a prominent figure is also nicely explicated.

Many of the scenes in the ocean are excellent, particularly a shark attack. But the film misses out on creating character development, once the men are at sea. Who are they? Why are they on Kon-Tiki? The answers are supplied but the drama is lacking.

Kon-Tiki is a beautifully made film. As a drama, it lacks resonance but as a recounting of an amazing real-life tale from the Forties, it’s terrific.

Thumbs up? Thumbs down? How about Thumbs sideways?