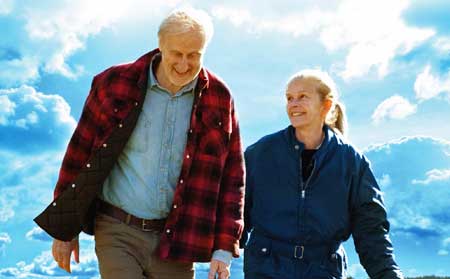 Craig Morrison, a New Brunswick farmer and carpenter had to defend himself in court six times between 2008 and 2010 for constructing a house that apparently defied government mandated building codes on his land overlooking the Bay of Fundy. Morrison, who was 88 when he started to build the house for himself and his wife Irene, an Alzheimer sufferer, supplied an independent assessment that his house was “built like a fort,”—and refused to move. Ultimately, his case became a cause célèbre, sparking a Toronto Globe and Mail piece, which stated “This is a true Canadian story, a cautionary tale of the tremendous power of the state over the individual in an age of pervasive bureaucracy.”

Michael McGowan, the director and writer of One Week and Saint Ralph, took Morrison’s story (with the now nonagenarian’s consent) and has turned it into a dramatic feature film. Even before its commercial release, Still Mine garnered seven Canadian Screen Award nominations, winning one, the Best Actor Prize for James Cromwell’s interpretation of Craig Morrison.

Zoomer love; one man vs. the “system”—underdog tale

Craig and Irene Morrison’s life is beginning to undergo changes as they reach their eighties. Their living, farming and raising cattle, is becoming more difficult, physically and economically. Worse, Irene is suffering from spells of vagueness, which could lead to a diagnosis of dementia or Alzheimer’s disease.

Ever resolute, Craig decides to build a new house for his ailing wife, one where she won’t have to negotiate stairs and the view from the Bay of Fundy will be beautiful. A craftsman, whose father was a ship builder, Craig Morrison knows how to construct a house. But the authorities in New Brunswick think otherwise. Lumber that Morrison custom built is deemed unacceptable because the requisite stickers aren’t on them. Floor joists, ceilings, wall studs—all in ship shape—are deemed improper.

While Irene gets progressively worse, Craig is either in court or—when he can—continuing to create what will be his and Irene’s last house.

This is a two-hander. You either believe in Craig and Irene and their love for each other or the film doesn’t fly. McGowan had the wit to hire the right actors.

Genevieve Bujold, the legendary star of Anne of a Thousand Days, King of Hearts, Kamouraska, Act of the Heart, Paper Wedding and Dead Ringers, is marvellous as Irene. The tough, idiosyncratic actress gives Irene a spine and anger to go along with her vulnerability.

James Cromwell, whose performances in Babe, Six Feet Under, L.A. Confidential and Star Trek, have made him a star in his senior years, nails the role of Craig Morrison. He dominates every scene he’s in, with a quiet authority that is perfectly in keeping with Morrison’s character. The love and absolute devotion he feels for Bujold’s Irene is well expressed through his physical interaction with her: you feel their closeness and unspoken devotion for each other. After decades of being a character actor—sometimes evil, sometimes good, occasionally goofy—Cromwell gets to play a lead at last. To say his performance is excellent is almost an understatement. At the age of 73, Cromwell has seized the role and made it his own.

Like Craig Morrison, Michael McGowan is a fine craftsman. A writer of children’s books, he knows his way around dialog and structure. Like any good dramatist, he appreciates conflict and strong characters. McGowan was inspired by newspaper reports of Morrison’s story to turn his life into a film. The results are clear: Still Mine is an honest, delightful story of a Canadian fighting for his rights—and the love of his life. It is McGowan’s best film to date.

Still Mine is a wonderful film, perfect for Zoomers. It’s heartfelt, funny, dramatic and romantic. See it. You’ll love it.