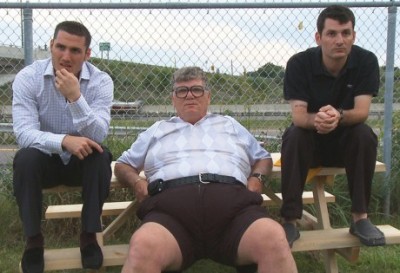 Shawney Cohen was born into an unhappy family. His father, Roger, a Russian Jewish immigrant, couldn’t get a successful business going in Canada until he bought The Manor, a strip club attached to a small motel. It proved to be a Faustian bargain. Thirty years later, The Manor is still flourishing in staid, conservative Guelph, Ontario. It’s a place of outlawry, expensive beer and prurient sexual fantasies, available to all in one of Ontario’s quietly polite small towns.

Of course, The Manor has been a huge financial success. The Cohens live in a palatial estate, with a garden and a duck pond. But there’s been a price. You’ve heard of Jack Sprat, who could eat no fat and whose wife could eat no lean? Reverse them and you have Roger, now 400 pounds and Brenda, his 85-pound anorexic wife. It’s as if a curse of Biblical proportions has been visited upon them.

Sammy, their younger son, has come to embrace the family business. Defying his dad’s many edicts, he has a stripper girlfriend, a sports car and a “who cares?” attitude to anyone who confronts him.

Shawney, the older son, the family’s artist, has made this film. The Manor is an intimate portrait of a family gone desperately, tragically awry. Made over a period of years, with intimate access thanks to Shawney, The Manor shows us lives led in the margins, whether it’s the “girls,” the managers or the owners.

Like most fine docs, The Manor has one major figure, who dominates every scene he’s in. That’s Roger, the flawed patriarch, whose arrogance extends to his nearly nude employees, his children and his sad, neglected wife. Over the course of the film, Shawney examines his father as he deals with his weight, his wife and a mounting crisis as the club experiences its first financial downturn. Through it all, Roger remains tough and self-assured, willing to take on all comers. The camera embraces Roger, pre and post-op, as his weight goes down after surgery but the man remains as imposing as ever.

Just as fascinating is Brenda, the mysterious matriarch, who spends her days empowering her husband and sons. Endlessly cooking for her family, she fights every attempt by Shawney—and occasionally Roger—to get her to eat. Quietly withering away, Brenda is the conscience of this film.

One evening during Hot Docs, I ran into Shawney at a party. We joked that the film would have never made its opening night slot if the family were in the deli business. But the truth is that The Manor is a compelling, human tale, not dependent on shots of naked women. It’s a true family drama—and compulsively viewable.