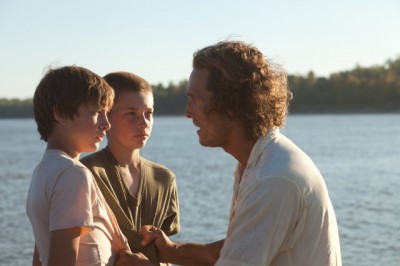 The film, about two teenage boys in the rural South who try to help a mysterious criminal connect with his long-time girlfriend, premiered in the main competition at the 2012 Cannes Film Festival. Though it didn’t win any awards, international critics praised Mud and several referred to the great American writer Mark Twain, whose characters Tom Sawyer and Huckleberry Finn are clearly inspirations for the film.

In January 2013, Mud had its North American premiere at Sundance, where, once again, it was a critical and audience success. With a cast including Matthew McConaughey and Reese Witherspoon, this Southern drama has the kind of leads that attract all sorts of media attention.

Ellis and Neckbone are best friends, modern day versions of Tom Sawyer and Huckleberry Finn. They live in rural Arkansas, drive dirt bikes and ride a motorboat across the river, exploring islands in the fecund, vividly gorgeous territory they call home.

Then one day, they meet their “Jim,” only he isn’t an escaped black slave, as in Mark Twain’s classic novels, which were set in the rural South before the Civil War. Mud is a white man on the run from the police and a furious criminal family led by “King,” the father of the man he’s killed. Mud is a small town good ol’ boy, just like Ellis and Neckbone, only he’s done something devastatingly wrong. His reason for murdering King’s son endears him to the boys, particularly Ellis: the dead man had been abusing Juniper, the woman Mud has loved since he was a boy.

The island where Mud is staying has a boat, which has been washed up into the trees during a heavy storm. Ellis and Neckbone get involved, helping Mud to bring the boat back to ground—and fixing it up for his dream, which is to escape with Juniper. Like characters out of a Shakespearean play, they help Mud to connect with his beautiful, lost lover. Ellis, in particular, identifies with Mud: he has fallen in love with a girl in his high school and is feeling bereft because his parents are squabbling and may get divorced.

Like so many American movies, Mud follows through on genre expectations. King and his posse show up in town, ready to find and kill Mud. Juniper proves to be a flaky mysterious woman, in love with Mud but filled with tragic thoughts and desires. She might betray Mud but still adore him.

We all know what’s going to happen. Violence and retribution. And spiritual and emotional growth for Ellis. But will Mud survive? And get Juniper?

What’s happened to Matthew McConaughey? Didn’t he used to be the lightweight star of Failure to Launch and The Wedding Planner? Now, he’s a presence in Indie films, not rom-coms.

His southern accent has come back and so has a stubble of facial hair, which has beautifully marred his mainstream good looks. In the past few years, he’s played the shyster attorney in The Lincoln Lawyer, the contract assassin in Killer Joe and the owner of the strip club in Magic Mike, all to critical accolades.

As Mud, the titular character in Jeff Nichols’ dark but evocative production, McConaughey is instantly charismatic. You can see why the boys would do anything for him. Mud feels like an authentic character—a bit dumb, a bit naïve but wholly romantic. There appears to be no artifice in McConaughey—which only shows you how good he is.

Jeff Nichols cast two unknowns, Tye Sheridan and Jacob Lofland in the key parts of Ellis and Neckbone. They have repaid his faith in them twenty fold They’re absolutely real—commanding figures in the film.

Who else is good? Who isn’t? Welcome back, Reese Witherspoon to a film worthy of your talents. Michael Shannon, now a star in Boardwalk Empire, returns to another Nichols film (everyone loved him in Take Shelter) and is, unsurprisingly excellent and surprisingly funny as Neckbone’s mentor and uncle. The great Sam Shepard, playwright and actor, is wonderfully wry and taciturn as Mud’s surrogate father. The absurdly underrated Sarah Paulson is great as Ellis’ mom—and by the way, she’s only one year older (at 38) than the 37-year-old Witherspoon. And, lest we forget, Joe Don Baker, whose rich baritone voice evokes the blues of Lightnin’ Hopkins, the tone of Western actor Ben Johnson in The Last Picture Show and the country styling of Hank Williams, returns in Nichols’ film as King, the patriarch of the bad guys. Great casting.

This is a personal project of Nichols, an Indie director whose sole success, Take Shelter, still hasn’t made money. Mud is a film Nichols wanted to do. The sense of the South, the coming-of-age of Ellis, the naturalist feeling around the character of Mud are extraordinary and delightful. Kudos to him—although there are faults in the film.

Mud is a film worth seeing, of course, but it’s not a perfect production. At some point, Nichols must have decided that certain genre expectations had to be fulfilled. The last quarter of the film has a massive shootout that feels like something out of a Grade Z thriller. There are a couple of false endings—and even the final one feels false.

At its best, Mud is a wonderful evocation of growing up in a rural society anywhere in the world. There’s pathos and love and heartache and humour and friendship here that is worthy of the best of films.

Sadly, the film isn’t allowed to simply be what it should: a coming-of-age story with small but telling dramatic content. For all of the talk of Mark Twain, the story that I’m reminded of, while watching Mud, is Hemingway’s The Killers. That tale is the perfect merger of what a young man might experience if thrust into a dramatically dark situation. But just as The Killers as a movie (in both the 1946 Burt Lancaster-Ava Gardner version and the 1964 Cassavettes-Angie Dickinson remake) couldn’t simply be Hemingway, Mud couldn’t achieve its purest distillation. That’s a pity but the film should be seen and supported in any case.