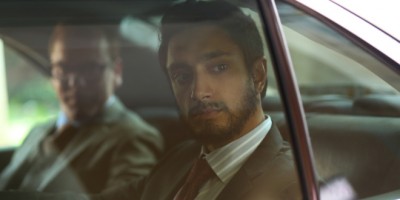 The novel by Mohsin Hamid about Changez, a Pakistani who is trapped between two worlds, that of his native country and the United States, where he’s been educated, was an international hit. It was nominated for the most prestigious literary award in England, the Booker Prize and won the distinguished Anisfield-Wolf Award in the U.S., which is given to authors whose work is dedicated to eradicating racism.

The film by Mira Nair, one of the great South Asian directors, grabbed the Opening Night spot at the Venice Film Festival and was a Gala at TIFF last fall. The build-up for the film’s release has been effective, with articles on the book, Nair and hot young actor Riz Ahmed appearing in newspapers and magazines in the US and UK.

An American professor teaching in Pakistan has been kidnapped, violently grabbed from the streets in front of his wife. Bobby Lincoln, purportedly a journalist but really working for American intelligence has been sent to a local café—a hot spot for revolutionary talk—to talk to Changez, a radical prof at the local university, and a suspected terrorist. Changez surprises Bobby by claiming that he’s always loved America and might be able to help locate his kidnapped American colleague. Bobby looks skeptical, so Changez launches into the story of his past.

The rest of The Reluctant Terrorist follows this narrative set-up, moving from increasingly tense scenes in the café to Changez’s tales of his life in the West. Arriving in the US to attend Princeton, Changez embraces the Ivy League life and moves on after graduation to a huge consultancy firm, where he becomes involved in making recommendations involving mergers and out-sourcing of personnel that advances the agenda of the neoliberal global economy that is with us today. A brilliant numbers man, he is applauded by Jim, his mentor, for his ruthless dedication to the bottom line.

While becoming a rising star in the corporate consultant business, Changez meets and falls in love with Erica, a beautiful privileged American blonde artist, who is haunted by the death of her previous lover. Despite this problem, Changez remains committed to their relationship. All is fine until 9/11 happens.

Suddenly, Changez becomes the target for border guards at every airport he travels through. Thoroughly humiliated, Changez begins to realize that, to a growing number of Westerners, he is now the enemy despite his embrace of the American Dream. After a miserable experience with Erica that makes him feel objectified and completely misunderstood, Changez finds it impossible to apply the neoliberal global “cure,” downsizing, to a Turkish poetry publishing firm.

He returns to Pakistan and slowly embraces radical Islamic philosophy. But Changez also has a love for the way of life he had before 9/11. While talking to Bobby Lincoln, he realizes that he is being forced to make a choice between the Muslim world and that of the West. What, we’re asked, should the “reluctant fundamentalist” choose?

The film revolves around Riz Ahmed’s interpretation of Changez. As the name implies, he has to be someone who can be a chameleon: a tough, practical Western capitalist sometimes, and a beautifully eloquent speaker for fundamental Muslim values at other times.

Ahmed has a slightly built presence; his great strength is that he is a quicksilver speaker. His handsome looks don’t conceal a vulnerability that occasionally sweeps across his face; nor does it conceal his arrogance when he is firmly convinced of Western values or their opposite.

We do believe in Ahmed’s performance—and that makes the movie.

In more stereotypical roles, Om Puri, Kiefer Sutherland and Liev Schreiber are fine as, respectively, Changez’ poet father, capitalist mentor and American journalist/interrogator. The only one who comes off as miscast is Kate Hudson, who was apparently pregnant during the shoot. For that reason or perhaps others, she is languid instead of passionate and comparatively humourless as Erica, Changez’ lover.

The Reluctant Fundamentalist was a timely book that hit cultural tastemakers during a period when sophisticated Westerners were beginning to examine the racist assumptions that were shaping political policy post 9/11. If anything, the film adaptation is even stronger than the book, tying Changez’s girlfriend Erica to the plot in a much tighter fashion, making his decision to leave the consultancy firm more dramatic while creating more suspense throughout the work.

But the film still feels flimsy: too obvious and dogmatic in its dramatic points and style. It may be that the film has arrived too late, despite many canny decisions to make the story stronger than ever.

The Reluctant Fundamentalist is a film about how the world has changed since 9/11. It’s suspenseful with good performances, taut direction and a literate script.

So why don’t I love it? Because it’s manufactured to make us think and feel certain things. It reminds me of the kind of liberal play or film about racism from the Sixties that is hopelessly dated now: In the Heat of the Night or Guess Who’s Coming to Dinner? or A Raisin in the Sun. There’s nothing “wrong” with any of them–or with The Reluctant Fundamentalist. I’d just rather watch something delirious and crazily truthful—say, Sam Fuller’s Shock Corridor or Godard’s Weekend–even if politically correctness is off the agenda. And I suspect you’ll feel the same way, too.