Sam Oosteroff has just become one of Ontario’s highest paid teenagers. The 19 year old has won the Niagara West-Glanbrook provincial byelection for the Progressive Conservatives and an MPP’s salary of $116,500, along with a taxpayer funded home in Toronto.

Oosteroff becomes the youngest MPP ever elected to the Ontario legislature, breaking the previous record set by Reid Scott who was 21 when he was elected in 1948. 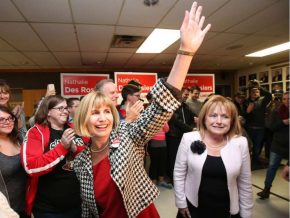 To the relief of the governing Liberals, Nathalie Des Rosiers held the riding of Ottawa-Vanier for Premier Kathleen Wynne. The premier’s political future might have been jeopardized if the Grits had lost a riding they’ve held since 1971. But Des Rosiers easily defeated outspoken former Ontario ombudsman Andre Marin who was a star candidate for the Progressive Conservatives.