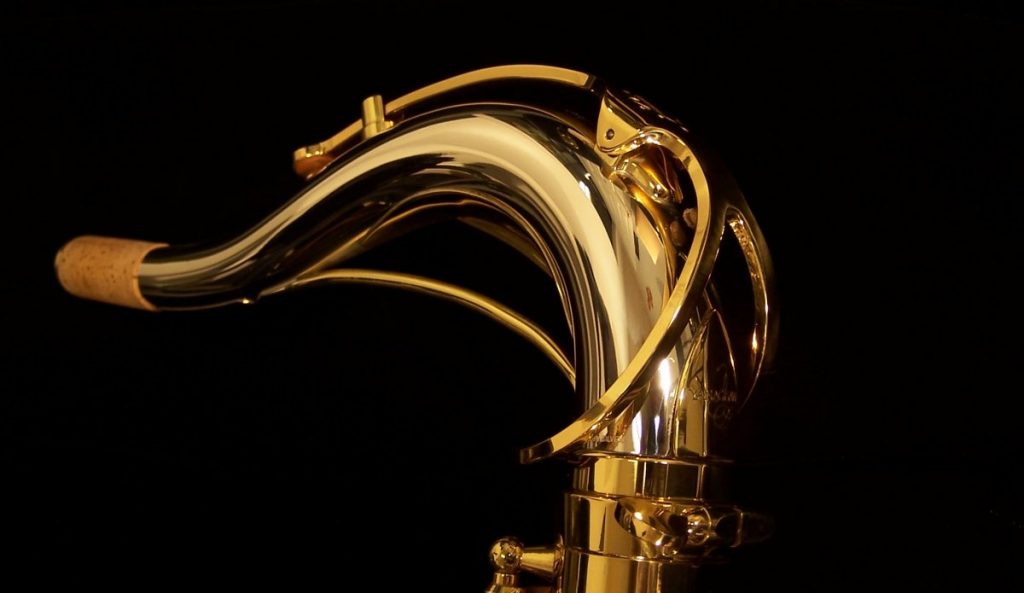 The innocent-looking saxophone neck, which unfortunately looks like a gun on X-ray

Think travelling with instruments on board a flight is tricky? Well, guess what – packing items related to performance can cause trouble, too! Many globe-trotting musicians scan music onto an iPad to lighten the load and, for pianists, to eliminate the need for a human page-turner. Problem is, some of the accessories that go with the iPad cause alarm during airport security checks. On Facebook, I came across an amusing thread posted by American pianist Anton Nel, who caused a bit of an incident at airport security. While the focus was music-related accoutrements, the thread veered off into illegal fruit, ghee (clarified butter), grass (not that kind), and a moment caused from beyond the grave.

In case you’re not familiar with all the doodads musicians must travel with, here is a quick Index of Music Accoutrements:
Admiral’s Club: for the elite flyers of American Airlines (this is not an accoutrement, but I had to look this up)
AirTurn: a way to turn to the next screen of music with a foot pedal
Compass stand: something to hold up your iPad on top of a grand piano
PageFlip: same idea as AirTurn; different company
Page Turner: the unlucky sod recruited last-minute to turn pages for the pianist
Metronome: a small battery-operated device with adjustable, regular, ticking sounds to keep the beat as you practise; torture device used by piano teachers; sounds suspiciously like a ticking bomb to airport security
Tuning hammer: for tuning pianos (tightening wires and turning metal pegs) and unfortunately, looks like a small weapon

Facebook thread:
Anton Nel: Back at the airport, to New York today for a concert. Just now I caused a bit of a commotion… I went through security, and suddenly realized that I was the only one on the “cleared” side. The baggage belt had stopped and the people on the other side were getting very backed up in a huge line. The security people GINGERLY take my carry on to a table (after much peering and pointing at the scanner screen) and I’m asked whether I’m carrying an item that might “cause alarm”. “I hope not,” is my response. Later (still no one coming through security), a man approaches me with “Explosives Specialist” (!!) on his badge. I’m asked a few more questions. It seems that my AirTurn page turning device that I’ve only travelled with for three years looks a lot like a land mine or bomb in the scanner… Oops! I’m very glad that they are so thorough of course. I’m sorry I held up the line. Can I please have a glass of wine now?

Zack Reaves: I’ve had this exact thing happen to me a couple times with my AirTurn. I think the older model especially causes concern because of the two wires sticking out of the top

Daniel Rowland: I had “red alert” at Amsterdam Airport Schiphol with AirTurn.

Chee-Hang See: I’m sorry you had this experience, Mr. Nel! But you’re not alone! That happens to me every time I fly…

Anton Nel: I always take the compass stand out — that looks like a box cutter on the x-ray! I tell you, I’m a dangerous person.

Jon Kimura Parker: I know to put my compass stand in my suitcase, but then I always leave it in the hotel room before rehearsal! I’ve also had some luck with this stand which can still be nestled into the tuning pins and is a little more inocuous ….

Anton Nel: Awesome!! I’ll definitely order one (or two at this price!) Thank you! (Smiley emoji)

Nathan Ben-Yehuda: “Sir, are you carrying an explosive device?”
“Well, I certainly regard performing chamber music without a page-turner to be ‘da bomb’.”

Ilya Gringolts: They’ve called a bomb squad with dogs for me in Zurich once with AirTurn. Buy PageFlip – it doesn’t have those suspicious-looking cables and red lights.

Anton Nel: LOL! And you are a scary-looking type!

Frederic Chiu: I just got stopped in Paris for the AirTurn. It happens regularly. And I don’t want to put it in checked luggage because it is part of the essentials that I can’t afford to lose or have delays, especially going TO a concert. I’ve given up traveling with my tuning hammer because I never needed it and was always stopped for it. Not worth the effort. I also gave up packing my disassembled piano chair – too much strain on the arms/hands carrying it around. We pianists suffer from not having our own instrument at concerts, including a favourite chair.

Martha Perry Ernst: I just have this vision of them saying “Sir, step back from the page turner!” in the airport. Somehow this strikes me as very funny!

Norman Krieger: Oh dear!!! I made the mistake of leaving my metronome in my luggage. As it was loaded onto the plane, it starting ticking at 120 (beats per minute – fairly fast). I was asked to leave the plane immediately and explain!!!!!

Pamela Mia Paul: 120? No wonder they questioned you. TOO SLOW!! (Snickering emoji)

Elyane Laussade: My Sony metronome has raised a few eyebrows.

Thomas Hoppe: This happened to me because of a metronome. To hell with the wine; start with the shots.

Stephen Page (not to be confused with Steven Page, Canadian musician): Always an adventure, isn’t it!? My saxophone neck is about the same size/shape as a firearm, so I’m questioned often, too!

Mack Richardson: My first wife was a chemist with Proctor & Gamble in Cincinnati. She was to fly to NYC to supervise a TV commercial for a new stain remover. In her purse she carried: 1. A bag of Tide detergent, 2. A clock timer. 3. A plastic bag full of grass from the back yard.
Quite a disturbance for 1980.

Betsy Parker: I was detained for having a jar of organic ghee in my carry-on bag (completely solid, in a labeled, sealed clear glass jar) and almost missed my flight!

Kiyoshi Tamagawa: I got stopped for a jar of Oregon cherries. Really glad they were not confiscated.

Linda Ball: A friend of mine collected little souvenir metal buildings. I had picked up a Brandenburg Gate and Radio Tower in Berlin, wrapped it in some tissue, stuck it in my carry on. Couldn’t have looked more like a small gun on the X-ray. A nice German lady showed me the screen and asked what it was. “I have no idea,” said I. We unpacked it and had a laugh.

Bill Krumpack: A TSA drug smelling dog busted me once for “smuggling” an apple into the country. Picked up the apple on the way out of Orly Admiral’s Club in Paris and forgot I put it in a jacket pocket. Dog’s handler asked if I had plans for the apple. Told him “nope, it’s all yours.” Dog’s reward was a kibble!!!

Lisa Morris: I, too, have been detained and inspected by dogs for a forgotten apple.

Bill Krumpack: After I turned over my contraband and was on my way to our flight home, the lady behind me said, “You look like an apple smuggler!”

Thanks to Anton Nel and his Facebook friends for this amusing thread.