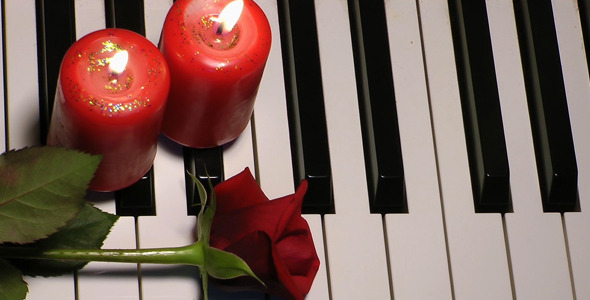 A cliche photo symbolizing “romantic” piano music, like Chopin. Note: no pianist in his or her right mind would ever drape florals or candles on any musical instrument.

I have mixed feelings about Chopin. If you’re a piano major, you have to learn a lot of Chopin and after a while, you’re tired of one syrupy nocturne after another. I put up a post on Facebook asking if anyone had a love-hate relationship with his music. Mostly pianists replied. Some said a bit of both; others swore their undying love and devotion (they tended to be non-pianists); yet others said, sensibly, it depends how it’s played. One post from Toronto pianist, Jacqueline Mokrzewski, said his music was often unnecessarily difficult because Liszt, a friend and rival of Chopin, wrote for himself as a performer, and therefore wrote music that suited the hand; Chopin, however, hid himself away and wrote what was inside him. He did not think of the actual mechanics as much, which is why his music is both exquisite and horrifically difficult to play. Most though, acknowledged an underlying appreciation for his music.

A couple of things happened while I was a music student at university that made me rediscover Chopin. One was a theory class where lecturer Howard Bashaw made us analyze one of Chopin’s pieces. I wasn’t thrilled at first – it was a LOT of notes to look at – but I’ll always be grateful for that class, because I learned how revolutionary his music actually was at the time it was written. I also learned the very beginning of a decidedly contemporary sound was thanks to Chopin’s innovative writing. The other event that completely turned my world upside down was the movie “Impromptu”, which came out in 1991.

My friend Yukari and I were university music majors at that time. She was in the piano performance program, and I was taking general music, concentrating on piano and voice. We were cynical Chopin haters, and found his music cliché (in the same vein as the photo above). The movie, starring a relatively unknown Hugh Grant as Chopin, Judy Davis as the eccentric writer George Sand, and Julian Sands portraying Franz Liszt, may not have been historically all that accurate, but whoa – Yukari and I had a profound change of heart after seeing that movie. George Sand (a woman writer assuming a man’s name who often dressed in drag) was passionately in love with Chopin’s music, and then the man. It was what Yukari and I needed to hear: Chopin’s music through the ears of a new devotee, someone enthralled, impassioned, and intensely captivated.

We floated out of the theatre as converted Chopin cult fanatics. We saw the world as a very happy place. Everything turned to delicate shades of pastel technicolour, and birds happily paired up and snuggled on the tree branches like in a Disney movie. We sighed heavily a lot that day, hands over our hearts. (To make sure I wasn’t imagining all this, I texted Yukari as I prepared this feature, and she poetically confirmed my memories, and we texted back and forth down memory lane.) I decided to learn some of his music again- something I swore I’d never do. Yukari pledged to learn his fourth Ballade for her graduation recital – and she did. We emerged changed women, completely high on the music of Chopin … and I began my (ongoing and one-sided) love affair with Hugh Grant.

This is the Ballade No. 4 in F minor – the one my friend Yukari learned for her graduation recital in 1992. It’s played here by Ingrid Fliter.