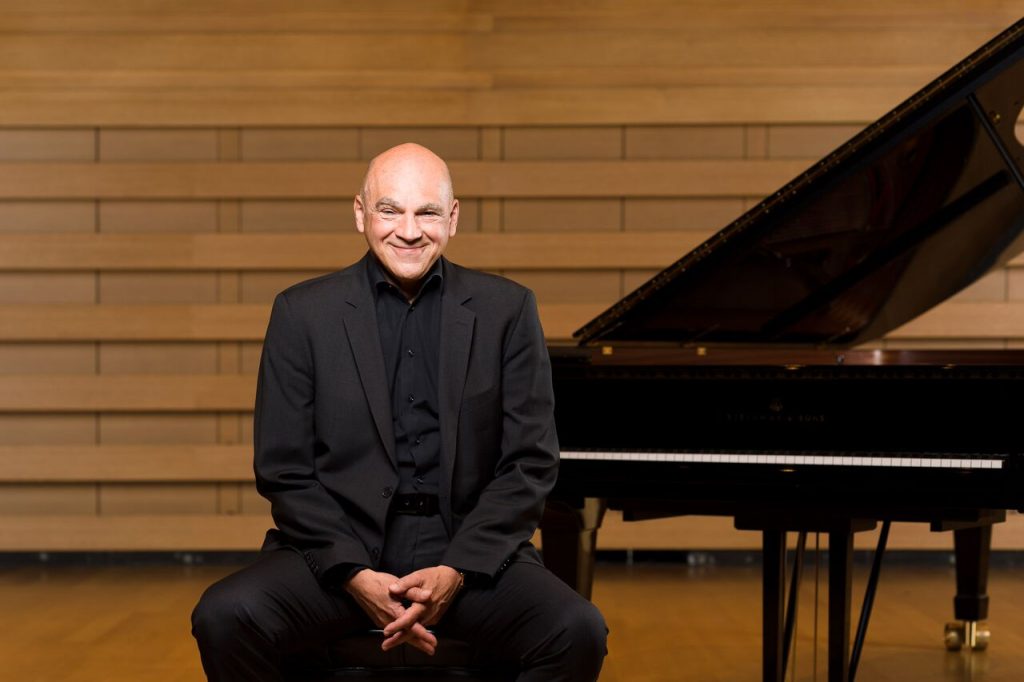 I spoke with several musicians about their approach to Bach. I asked them why his music is rarely programmed in piano recitals, the issue of harpsichord vs. piano, and approaching his music as a modern or Baroque string player. All had fascinating perspectives to offer on this great master. Today, we’re speaking with pianist James Anagnoson , Dean and Piano Faculty member of The Glenn Gould School .

Q: When is the last time you publicly performed a keyboard work by Bach?
A: My last Bach performance was 2008 or 2009 when Leslie Kinton and I played the Bach Concerto for Two Keyboards in C + BWV1061 in Vancouver. We have played this incredible piece for over 25 years and it is always an exhilarating experience! The 1st movement is a rhythmically engaging concerto grosso style, and features wonderful antiphonal writing between the keyboards. The 2nd movement is a hauntingly beautiful movement for keyboards alone, and the concerto concludes with a rollicking high energy double fugue that starts with one keyboard, then the other, then strings jumping in section by section until the entire ensemble is together – a sensational way to finish the piece!

Q: There is a lot of Bach in early student repertoire – inventions, the minuets, then the preludes and fugues, the suites, toccatas, etc. Do you encourage your students to program works of Bach?
A: When I arrived at Eastman at the age of 17 I asked my new teacher if I could learn Bach’s Italian Concerto. My teacher informed me that I could do that, but only after I had passed his rite of initiation for new students. This consisted of learning three Sinfonias (3 part inventions) in a particular way: first voices alone, then in combinations of only two voices (soprano-alto, soprano-bass, alto-bass) with separate hands, and then soprano in the right hand, bass in the left hand, while singing the alto. All by memory. AND – the last step of playing soprano and bass while singing the alto had to be in master class, in front of all of his other students. I very reluctantly did this, but have been eternally grateful, since after going through that process I never had a problem thinking horizontally when making music, which is really the most important lesson to be learned from studying Bach at early ages. (I should have been asked to do this when I was 12 or 13). In terms of my students at the Glenn Gould School, I definitely insist they play Bach – Preludes and Fugues, Suites, the Italian Concerto etc. These are after all great keyboard works, and playing them most importantly forces students to deal not only with linear clarity, but structure and phrasing as well, all of which are such a very challenging but integral part of understanding and performing Bach’s music well. In fact, the most valuable and often overlooked aspect of this is the kind of thinking we learn from playing Bach is needed to perform all other styles of music as well. In many ways, this is the most critical reason to study Bach as a young student as well as at post-secondary levels.

Q: Wow – your teacher put you through Bach Boot Camp. Is the untouchable Goldberg Variations recorded twice by Canadian pianist Glenn Gould the reason why pianists, (especially here in Canada) rarely, if never, record or perform Bach?
A: I actually don’t think so – I think it is more that there is so much disagreement in the profession about how to interpret Bach on today’s piano, or even if one SHOULD play Bach on today’s piano, that it is only a player who feels incredible emotional connection to Bach’s music who will feel compelled to perform or record his works. It is, after all daunting to know that a performance or recording will be met with a lot of criticism, regardless of the quality of the playing.

Q: If you were told, “you HAVE to program one work of Bach before the end of the concert season”, what would it be, and why? (I’m hoping you’ll say the Bach D- with Leslie Kinton, your piano duo partner.)
A: HAHAHA – I actually love all of his keyboard concertos, including the d minor, but I have a particular soft spot for the Keyboard Concerto No 7 in G Minor BWV 1058. I especially love its 2nd movement, so it would be tops on my list. And incidentally, if I am reincarnated I would like to come back as a violinist (at least briefly) so I could play the Bach Concerto for Two Violins BWV 1043 , again mostly because of its absolutely stunning 2nd movement!

Q: What is your opinion about using all the modern advantages of the piano (like using the pedal and dynamics) that wasn’t available in Bach’s day when he composed for harpsichord?
A: I think that each composer has a particular genre that should be the model we look at to best understand his or her music. For example with Beethoven it is his string quartets – with Schubert his lieder. With Bach I think it is his vocal music. When I was an undergraduate student at Eastman every pianist was required to be in the chorus backing up all of the vocal students. Although we tried our best to skip rehearsals whenever possible (“I really should be practicing” as Graffman said!) we nevertheless had the opportunity to perform some of Bach’s great vocal works, such as the incredible  Mass in B Minor and the beautiful Christmas Oratorio. I remember being exhilarated when we finished the performance of the Mass in B- in the beautiful Eastman Theater, and I remember thinking “THIS is Bach!!!” So when I play Bach I don’t think about the harpsichord vs the piano – instead I think of trying to be vocal on the keyboard. That means that I definitely use dynamics, just as a singer would, although in a way that is stylistically appropriate on the keyboard, in other words not employing the full range of dynamics that today’s piano is capable of. I do, however, avoid using pedal.