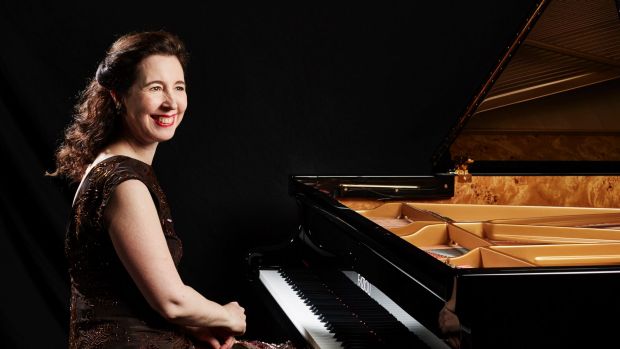 I spoke with several musicians about their approach to Bach. I asked them why his music is rarely programmed in piano recitals, the issue of harpsichord vs. piano, and approaching his music as a modern or Barque string player. All had fascinating perspectives to offer on this great master.

Today, we’re speaking with pianist Angela Hewitt, renowned for her Bach interpretations. She is also the founder of the Trasimeno Music Festival in Umbria, Italy.

Q: To us Canadians, you’ll be forever linked as the winner of the one-time International Bach Piano Competition, held in 1985 to mark JS Bach’s tercentennial year. While it was over thirty years ago now, do you find people still expect you to program Bach in your recitals?
A: Well at the moment I’m in the middle of a four-year “Bach Odyssey”, performing the complete keyboard works of Bach around the world in twelve different programmes. So he’s a big part of my life at the moment! Though of course I’m not doing that exclusively. Last night I played de Falla and Shostakovich concertos in Budapest which I loved. Bach’s music is simply the greatest, so I really can’t complain. I see what an effect it has on audiences all over the world. But perhaps when I’m finished with the Odyssey in 2020 I will take some time off without playing his music!

Q: Was the music of Bach a big part of your formative years as a music student?
A: I grew up with the music of Bach since my father was organist and choirmaster at Christ Church Cathedral in Ottawa for almost 50 years. He played all those great organ works which I loved from the time I was a little child. His music formed the basis of my musical education—which is the best teaching you can get. I played Bach on the piano, on the violin, on the recorder, I sang Bach, danced to Bach….so as you can see, he has always been a close friend!

Q: What do you say to purists who say Baroque music should only be performed on period instruments?
A: That’s ridiculous, especially in the case of the piano. The piano was invented so that it could imitate the cadence of the human voice—something which the harpsichord was unable to do (play two notes with the second one softer). That is a basic musical gesture which you do when you sing, when you talk, when you play the violin, play the oboe…..all things that Bach did! So I simply don’t buy that. But what is important to me is to play it in what I think at least is the correct style—not drowning it in pedal but keeping the different lines of music very clear. Keeping the rhythms buoyant. Knowing about all the performance practises of the time. It’s very much a special study, but one which will make you a better all-round musician. I can’t imagine being a pianist and not playing Bach.

Q: I find it’s extremely rare to come across a piano recital that includes the music of Bach. Why do you think this is? How often do you program his music?
A: Most pianists are too scared to play the original Bach on the piano in public. It’s hugely difficult. There is nowhere to hide. Plus many of them simply don’t know what to do with it as nothing is marked in the score and there are many decisions to make yourself. A lot of pianists are more comfortable with playing the Busoni transcriptions, for instance, of Bach—but in my mind they don’t have much to do with the original. I remember the great Shura Cherkassky telling me he was too afraid to play even a French Suite. Having said that, pieces like the Goldberg Variations are turning up a lot more now on concert programmes than when I first learned them back in 1975. Actually it’s not that hard to play the notes of the Goldberg—especially with today’s standards for technique. But musical intelligence is another thing altogether, and playing Bach with a correct style yet another thing again. I programme his music all the time. It’s the basis of my career.

Q: Tell us about your festival in Italy. Does Bach’s music ever make an appearance there?
A: In another two festivals – so by the summer of 2020, I will have played the complete keyboard works of Bach at my festival in Italy. This summer I’m playing the complete Well-Tempered there. But I’ve already done the complete French Suites, Partitas, Inventions, Sinfonias, The Art of Fugue, the Goldberg several times, and much else. I’m also playing the Trio Sonata from The Musical Offering this summer, having already done all the Gamba Sonatas and many of the violin sonatas. I even conducted myself the cantata “Ich habe genug” with the wonderful Gerald Finley singing the solo part. That was terrific! I also performed all nine keyboard concertos (including Brandenburg 5 and the Triple Concerto) in one day—five in the afternoon, four in the evening—with dinner in between. That was with the Salzburg Camerata back in 2014. A day to remember!

Thank you reading, and I hope you enjoyed reading these interviews as much as I did preparing them!