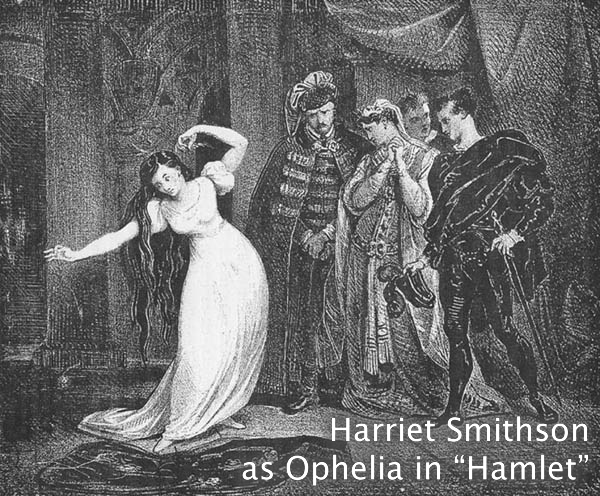 Berlioz’s muse for his most famous work, “Symphonie fantastique”.

If you ever thought the cliché of the Romantic poet or musician wandering the streets in despair clutching a bottle of whiskey to drown away his sorrows as the rain poured down …. that would pretty much describe composer Hector Berlioz, who was every inch the ultimate Romantic–era composer.

He attended a Paris performance of Shakespeare’s Hamlet in 1827. The language barrier was a non-issue for him; he took one look at Ophelia, played by the Irish actress Harriet Smithson, and that was it, he had to have her. For the next five years, he pursued her, writing endless love letters and decided to conquer her with his music. Here is the opium-inspired dream that became the storyline behind Symphonie fantastique:
-a young musician of “morbid sensibility and ardent imagination”, frustrated in love, tries to kill himself with opium
-instead of dying, he has powerful hallucinations
-recalls seeing his beloved dancing at a ball
-goes to a pasture to calm down
-he murders her in a fit of jealous rage
-he is sent to the guillotine
-his corpse becomes the centrepiece of a witch’s Sabbath and his beloved shows up as a scary hag

Those were some powerful drugs. Amazingly, he did marry Harriet and had a child with her. The marriage didn’t work out, but Berlioz supported her until her death.

Featured here is Leonard Bernstein to conduct and break it down for us in one of his legendary “Young People’s Concerts” in 1969.