Remembering Beethoven – and his will to prevail – on his birthday, December 16 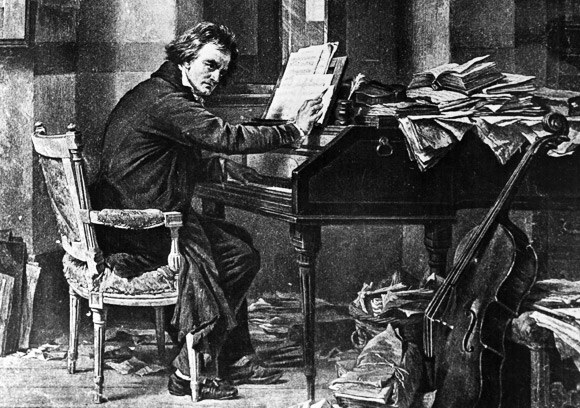 When I was a piano student, I kept toggling between the sonatas of Mozart and Beethoven (so much so, I neglected Haydn completely). Tackling Mozart was like trying to bake a soufflé – both must be light, airy, and perfect, without collapsing. When I had enough of that, I’d switch over to Beethoven, which felt more like attempting a beef wellington with a side of potatoes – solid, sturdy, but still requiring proof of technique and refinement. I picked up on Beethoven’s struggles and how he musically shook his fist at the universe. This is, of course, when I wasn’t shaking my own fist at the score, wondering how the heck I’d learn this in time for the Kiwanis Music Festival (a nation-wide network of performance competitions) and Royal Conservatory of Music exam. This combo of dealing with Beethoven, competitions, culminating in The Big Exam, was the musical triumvirate, leading to my own personal triumphs. (Trust me. Just performing Beethoven without memory slips is a triumph.)

So much has been written about Beethoven, and most people know of his story. When I first learned of the Heiligenstadt Testament, it became a kind of inspirational compass for me. When I’m having a bad time of it, I just have to read this document and, doing my best to preserve my mascara, my perspective bounces back immediately.

This extraordinary document was written in October 1802 in Heiligenstadt, a Vienna suburb where Beethoven lived for a few months on doctor’s orders. It was addressed to his brothers Karl and Johann. He references contemplations of suicide but decides he must live for his art. He first experienced hearing problems at age 26, and had lost 60% of his hearing at the time he wrote this, at age 32. He was completely deaf by 46.

Here’s an edited version:
Think that for six years now I have been hopelessly afflicted, made worse by senseless physicians, from year to year deceived with hopes of improvement, finally compelled to face the prospect of a lasting malady.

Though born with a fiery, active temperament, even susceptible to the diversions of society, I was soon compelled to withdraw myself, to live life alone. If at times I tried to forget all this, oh how harshly was I flung back by the doubly sad experience of my bad hearing. My misfortune is doubly painful to me because I am bound to be misunderstood; for me there can be no relaxation with my fellow men, no refined conversations, no mutual exchange of ideas. I must live almost alone, like one who has been banished; I can mix with society only as much as true necessity demands. If I approach people a hot terror seizes upon me, and I fear being exposed to the danger that my condition might be noticed.

But what a humiliation for me when someone standing next to me heard a flute in the distance and I heard nothing, or someone heard a shepherd singing and again I heard nothing. Such incidents drove me almost to despair; a little more of that and I would have ended my life — it was only my art that held me back. Ah, it seemed to me impossible to leave the world until I had brought forth all that I felt was within me.

Forced to become a philosopher, oh it is not easy, and for the artist much more difficult than for anyone else. Recommend virtue to your children; it alone, not money, can make them happy. I speak from experience; this was what upheld me in time of misery. Thanks to it and to my art, I did not end my life by suicide. Farewell and love each other.
Ludwig van Beethoven
Heiligenstadt,
October 6th, 1802

Evgeny Kissin is one of the most incredible pianists on the touring circuit. He plays Beethoven’s notoriously difficult Piano Sonata No. 32 in C minor, Op. 111. This is Beethoven’s last piano sonata and is emotionally charged compared to his early works, which is why he was eventually dubbed “the first Romantic”. He was completely deaf by the time he composed this.

(If you have difficulty accessing the video, here’s the link here.)