In case your resolution includes more live music, here’s what Toronto has to offer … 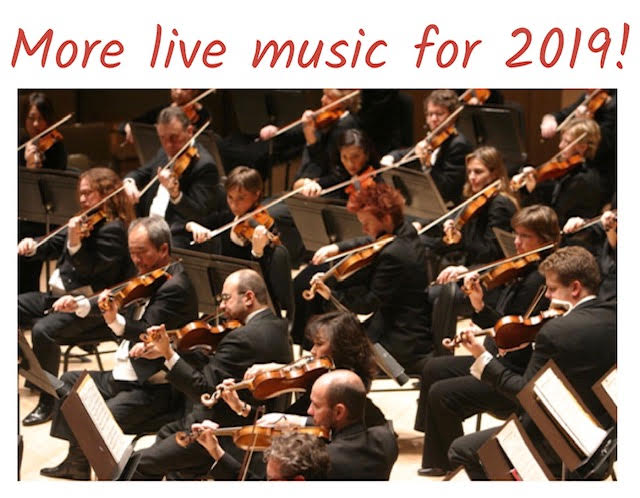 If your resolution was to incorporate more live music into your life, here’s a list to help with that. There’s a range of concerts to choose from, so you can check out something familiar or something totally new.

You can’t go wrong with Vivaldi! Included in this program are the Sonata for violin & continuo in C Minor, RV 6, and the Sonata for 2 violins in G Major, RV 71. This 18th-century Roman soirée, The Harlequin Salon, is a new multimedia program created, scripted, and illustrated by Tafelmusik oboist and artist Marco Cera. Combining music, caricature sketches, projected images, costumes, and text, The Harlequin Salon opens a door into the glittering world of Pier Leone Ghezzi — renowned painter, consummate party host, and history’s first professional caricaturist. Featuring Italian soprano Roberta Invernizzi as prima donna Faustina Bordoni; actor Dino Gonçalves as Harlequin; violinist and Tafelmusik music director Elisa Citterio as Antonio Vivaldi; cellist Felix Deak as Giovanni Bononcini, with stage direction by Guillaume Bernardi, The Harlequin Salon imagines what might happen at one of Ghezzi’s famous soirées if well-known baroque musicians and composers were to rub shoulders with Harlequin, the boisterous servant character from Italy’s commedia dell’arte tradition. The program includes arias by Porpora, Vinci, and Broschi, and instrumental music by Vivaldi, Bononcini, and Gasparini — composers Ghezzi met and portrayed in his famous sketches.

Sō Percussion: Amid the Noise
They’re known for their originality, interpretations of modern classics, and an “exhilarating blend of precision and anarchy, rigor and bedlam” – so says The New Yorker. Sō Percussion has redefined the the modern percussion ensemble. Their Koerner Hall return on January 19, titled Amid the Noise, consists of four pieces, all of which will be receiving their Canadian premieres: jazz pianist and MacArthur “Genius” prize winner Vijay Iyer’s TORQUE; Pulitzer Prize winner and member of the vocal ensemble Room Full of Teeth, Caroline Shaw’s Taxidermy; Irish composer Donnacha Dennehy’s Broken Unison, and Sō Percussion’s own Jason Treuting’s Amid the Noise.

Love, Remixed
Remix and Rediscover Your Love of Early Music!
Early instruments, new music. For the first time in our history, The Toronto Consort presents a program of 20th- and 21st-century music written for early instruments and voice. Featuring Juno-nominated James Rolfe’s Breathe with text by Hildegard of Bingen, and David Fallis’ Eurydice Variations, the story Monteverdi’s Orfeo told from the point of view of Eurydice. This Valentine’s Day weekend, join us as we reinterpret, remix and rediscover our love of Early Music.
Artistic Direction by David Fallis & Katherine Hill.

La Bohème
Art is life for this group of young bohemians, as they navigate infatuation, poverty, and loss in 19th-century Paris. The timeless story inspired the popular Broadway musical Rent and is a celebration of free-spirited creativity and the power of young love, all set to some of the most glorious music ever composed. For fans of the film “Moonstruck”, this is also the opera that Ronny took Loretta to, resulting in all kinds of sweeping passionate feelings that lead him to yell at her to get upstairs, into his apartment. Puccini’s massively popular opera returns to the stage in John Caird’s production.

GUSTAVO GIMENO conducts The Firebird
The Toronto Symphony Orchestra’s 2018/19 concert season culminates with an explosive orchestral coda, as Gustavo Gimeno, the TSO’s next Music Director, returns to the podium to lead the Orchestra in the ever-popular suite from Stravinsky’s blazing, fairy-tale-inspired ballet. Also featured – Sibelius’ virtuosic Violin Concerto, a majestically lyrical evocation of the North, and the only concerto he ever composed, with the TSO’s Concertmaster, Jonathan Crow, as soloist. Prokofiev’s light and spirited First Symphony, “Classical”, rounds out this final program.

Enjoy all the great concerts Toronto has to offer for 2019!