Those lush film scores of the Golden Age of Hollywood: composer Erich Korngold 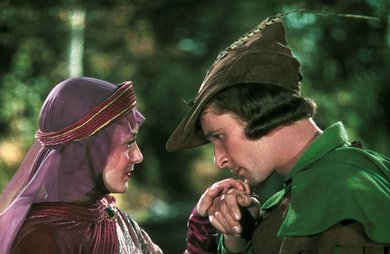 The New Classical FM regularly programs current and popular film scores, and film scores are a popular way for the uninitiated to hear the powerful effects of orchestral music. Today we’re looking at Erich Korngold, one of the most important and influential composers in the history of Hollywood, who was “the” guy, before John Williams came along.

Erich Korngold was a child prodigy who grew up to enjoy an active career in the theatre in Europe during his 20’s. He composed opera and concert music, and was such a huge fan of Johann Strauss Jr., waltz music master, he managed to exhume a number of lost scores. He re-orchestrated and staged them.

War forced Korngold, from a Jewish family, to flee to the US in 1934, where he became a very successful composer of movie scores for films. He scored “A Midsummer Night’s Dream”, “Captain Blood” (the breakthrough film for Errol Flynn who went on to Robin Hood fame), “Anthony Adverse” and “The Adventures of Robin Hood” (which won Korngold an Oscar). Korngold could not return to Europe due to the war, and retired from film composing in 1947. He returned to composing concert pieces, including his Violin Concerto, which is part of the repertoire today, along with the Symphonic Serenade for Strings.

This is terrific swashbuckling music for Robin Hood – here’s the trailer:

Here is what Korngold loved best, concert music. This is his Violin Concerto with Nicola Benedetti and the Sinfonia Varsovia, conducted by Jean-Jacques Kantorow.

Erich Korngold was born May 29, 1897 in what was then Moravia, Austria-Hungary (now Czech Republic) and died November 29, 1957 in Hollywood, US.