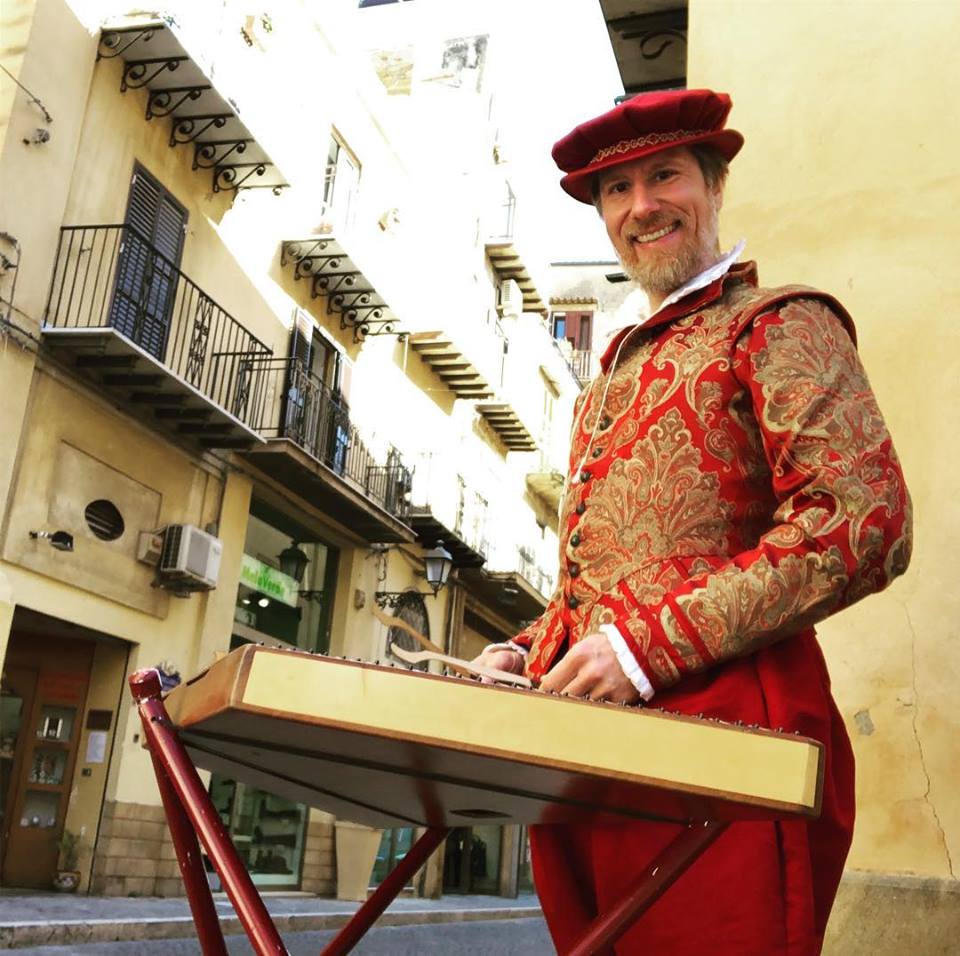 Vince Conaway is a travelling busking musician who frequently updates his Facebook feed with beautiful photos of his travels and gigs in Europe, mainly in Italy. The pic that grabbed my attention was this, below, of an instrument-making shop in the Italian town of Cremona, where this art form has a rich and long history. (think Amati, Guarnerius, and Stradivarius violins and violas). I would have stopped and studied this display for a while. 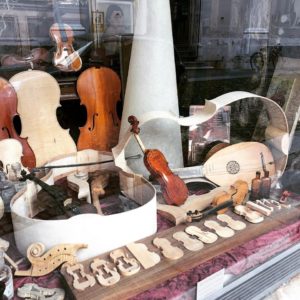 I’ve enjoyed Vince’s posts over the years, with photos featuring him in Renaissance costume, playing at various fairs across Europe. I thought I’d ask him about life as a travelling modern-day minstrel.

Your Facebook says you’re “A musician traveling the world with his hammered dulcimer.” Now, I imagined some gigantic harpsichord thing and wondered how mobile that was. Most folks won’t know at all what a dulcimer is. Would you explain to our readers what it is?
Harpsichord isn’t a bad guess! The dulcimer looks like a cross between a small xylophone and a harp, with a series of strings struck by small hammers. It’s a direct ancestor of the piano, inspiring the mechanized hammers attached a harpsichord keyboard. Further muddying the family tree is the fact that harpsichords and dulcimers are descended from the same Ancient Greek plucked zither known as a psaltery.

You studied computer science and engineering – how did you get from that to being a musician? Did you always study music as a kid?
I had three years of piano lessons as a child and was active in my high school choir, but I really blossomed as a musician when I started teaching myself instruments, particularly members of the mandolin family, as a break from my technical courses.

Did you set out to busk for one summer or something? And then it expanded to a full-time gig? Or is it summers only? Please tell us how it all went down, and how long you’ve been on the road.
Busking came later in my career, I started out as a folk singer at my local renaissance festival in 1998. I had visited a number of times as an attendee before friends insisted I should audition, and after my first season I was hooked and expanded to other festivals until going full time in 2002.
I had already picked up the dulcimer as a hobby, and it took over my act within a few years. In 2006 I was playing music and acting as road crew with an acrobatic troupe for a series of European festival dates and played a street set in Florence, Italy, on my day off. If went so well that I booked an extended tour the following year, and I’ve been back almost every year since and often multiple times a year.

How many countries have you visited?
I generally tour in winter and spring so I’ve mainly stuck to places that are warm February to May. Italy is my favourite and I’ve played almost every city with a population over 100,000 (and I’m working on the ones over 50k); I’m frequently told by Italians that I’ve seen more of their country than they have! Additionally, I’m a big fan of Croatia and Austria, and I’ve had some wonderful experiences in Argentina, Uruguay, and Chile. I’m waiting for Greece to get its economy back on track before I return, but it’s also been a favourite.

Can you speak enough Italian to introduce your sets, or do you speak in English?
My Italian is pretty solid, and I’m conversational in Spanish. Luckily, most Greeks and Croatians speak English and I was stymied in my attempts to learn German because Austrians speak better English than I do.

Then there are the costumes. Did that also become part of your act later, or did you start out with the period costumes?
That carried over from being a renaissance festival performer. It’s a great way to capture attention and is a lot of fun! Kids, especially, have amazing reactions to a costumed performer.

Where do you get them?
Some of the costumes have been bought at renaissance festivals, but my favourites are gifts from very talented friends who are as obsessed with historical clothing as I am with historical music.

I’d like to know about the music you play. Please tell us what composers or pieces are highest on your rotation, and what draws you to these works. (And if they’re all Renaissance, Baroque, etc.)
I play a mix of traditional, historical, and original music. Hands down my favourite composer is Francesco Canova da Milano; his cohort of early-16th-century lutanists delights me and he was the best of the bunch. A lot of what I play is adapted duophonic lute music, which was all the rage for a window of time among polyphonic phases of fashion. It has a much-later baroque sound, which is a reminder of how problematic periodization can be. I love the repertoire because it’s deeply playful, as composers were throwing off the rules of previous medieval styles. They were popularizing the Fantasia and Ricercare forms of imitative improvisatory playing.

I know a lot of folks who are a bit restless, carry some wanderlust with them, and want to quit their jobs and go wander the world. I’m wondering if you have the reverse – “hominglust”, where you may want to put some roots down and stay in one place for a while. Do you have a home base in Europe or are you fully mobile?
I technically live with my parents in Cleveland who complain that they never see me. I don’t get homesick very often and any time I exhibit a nesting instinct is usually a symptom of illness as I’m coming down with a cold or entering a depressive episode.

There’s a lot of focus in Canadian media on mental health, and talking about it. How do you pull yourself out of an episode when you have a gig that day?
I’m generally quite good about performing no matter what mental state I may be in. I’m also lucky that my depression is a mild version that mainly manifests as lethargy and lack of enjoyment, which are easier to work through than other symptoms. It’s after the gig that things get hard for me.

I’ve written previously about some of the issues travelling musicians go through when transporting instruments. Recently, an announcement came out about this very topic which is encouraging. Any issues with travelling with the dulcimer when boarding a plane?
Not usually. Things have gotten a lot easier since the US passage of the Air Passengers Bill of Rights, but even when I have to check the dulcimer I’ve not had a problem. Of course, I take such ridiculous precautions that the instrument’s maker laughed at me and informed me that they test prototypes by jumping on them, but I still slacken all tension from the strings and remove the bridges.

Please tell us some highlights. Be it audience reaction, food you’ve tried, the sights you’ve seen.
There are so many stories to tell! I particularly love meeting people who have seen me play previously on tour, such as the school group from south-Italian Foggia who saw me playing in Como while on a northern field trip, and came up to say hello. I have an occasionally-fraught relationship with law enforcement, so being tipped by or selling CDs to police officers always makes my day. Another particular favourite is when I can make a nun smile.

Arguably my best moment was when a woman told me her daughter had asked, ten years prior, how I got so proficient. Smart aleck that I am, I had answered, “practice”. I was informed that her daughter took my offhand comment to heart and had just been awarded a conservatory scholarship! Now, “it’s not hard, it’s just practice” is my standard opening comment to children as I start explaining the instrument.

What is the biggest difference between North American and European audiences? Or are they mainly tourists from all over the world?
I don’t generally play for tourists; I like to meet and entertain locals. I avoid Venice in favour of Padua; Florence for Pistoia. As for differences, it’s mainly about opportunity; European cultures have a tradition of recreational walking that North American cities have neglected with urban planning revolving around automobiles. Otherwise, humans are human, and our need for music is, in my experience, universal.

Here is a sample of Vince’s playing: the Fantasia XI in Lecce’s Castel Aragonese. If you’re walking around the ancient cities of Italy, I hope you catch him in person for yourself.