Kozeluch who? He was ranked alongside Mozart and Haydn (though dismissed by Beethoven) 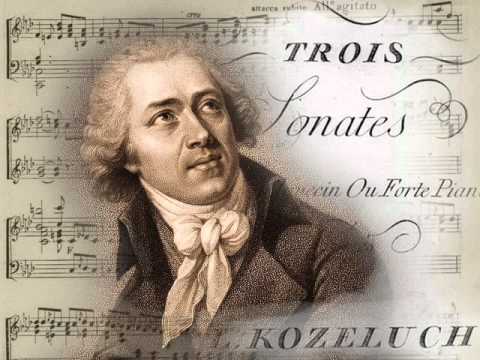 Kozeluch was a pianist, composer and teacher, and highly regarded in his day. He composed mainly for the keyboard, including sonatas and concertos, but he also wrote chamber music, choral music, and opera. Like so many other composers I’ve written about, he abandoned a career in law to pursue music. Just as, nowadays, North American performers trek to New York to make a go of it, Kozeluch headed to Vienna to seek fame and fortune. He found it, and advanced his career thanks to his talent and excellent networking skills. He was a teacher to many of high society and royals. He was nearly a successor to Mozart for a gig as court organist, but he turned it down, fearing he’d put up with the same negative work environment that lead Mozart to quit. Kozeluch was smart – he set up a publishing firm, had his brother run it, and was therefore able to publish his own compositions. (Mozart could have learned a thing or two from him.)

At the time Haydn and Mozart were flourishing, Kozeluch was ranked with them. When Mozart died in 1791, Kozeluch was again offered Mozart’s position as music director and composer at the court of Emperor Franz II – highly prestigious and at double Mozart’s salary (don’t they usually offer the same job to the next guy at far less …?). He also joined a masonic lodge, another parallel to Mozart, who was a member. Kozeluch figured joining would be good for more networking.

The fortepiano was a link between the harpsichord and the modern-day piano as we know it today. It has a tinny, “plucked” sound, that takes a few minutes to get used to – give it a whirl, see if you like it.