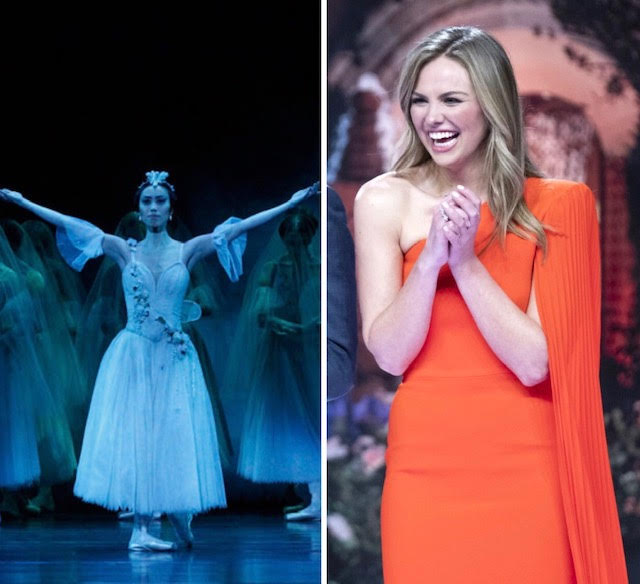 Giselle and the vengeful Wili, along with Hannah Brown, the current Bachelorette

Composer Adolphe Adam’s legacy, along with “O Holy Night”, and ballet music “Le Corsaire”, is unquestionably his music for the ballet “Giselle”.

This is a judgement-free zone, right? Because the plot of “Giselle” reminds me of the potential fall-out from The Bachelorette: guy leaves a girlfriend behind to do the show, messes around with the Bachelorette, strings along the girlfriend back at home, and leaving a trail of broken hearts in his wake. Except in The Bachelorette, there is no dramatic fatal ending (we hope).

Giselle is about a young and naive peasant girl whose heart is toyed with, and broken by, the already-betrothed Albrecht, a not-so nobleman who pretends to be a peasant boy to come on to Giselle. (Hm. Reminds me of Jed and what he allegedly did to Haley.) She is so distraught when she finds out he is promised to another, she throws herself upon his sword. “Hell hath no fury like a woman scorned” takes on new meaning as the Wilis, a group of mystic dance creatures who died of broken hearts, swarm rogue men and dance them to death. I guess in Bachelorette land, the modern-day equivalent would be the social media lynch mob. As the Wilis make Albrecht dance well into the wee hours, Giselle, newly-minted as a Wili, loves him enough from beyond the grave to save him. (Let’s hope Hannah B. never accepts Luke P. back into the fold!)

Giselle – Act II duet with Natalia Osipova and Carlos Acosta, The Royal Ballet. Her opening developpe – unfolding the leg out to the side – is unreal.

PS: this post is NOT a public declaration that I watch this show.