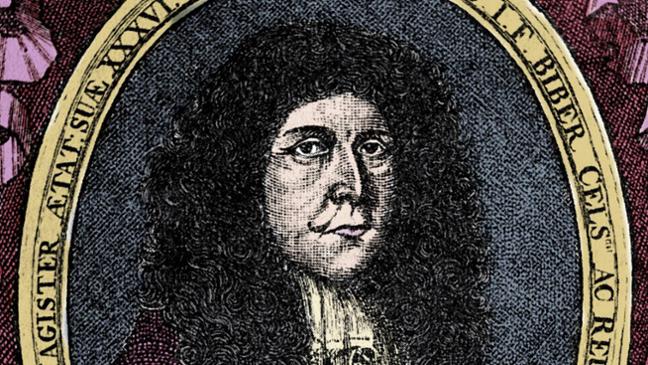 Heinrich Ignaz Franz von Biber was a rock star violinist in his day. He was also one of the most important composers for the violin, ever. He had an incredible technique, and could easily reach all of the required hand positions (where the left hand is placed on the strings, and not always easy to do with accuracy). He explored all the instrument could do, more than previous composers of the violin, and even what different tunings that could be done. The violin was primarily an instrument for ensembles until Biber came along; he wrote one of the first known solo pieces for violin, the passacaglia (music with a repetitive bass, and quite dramatic) of the Mystery Sonatas.

Have a listen to Andrew Manze’s recording of Biber’s Passacaglia for Unaccompanied Violin. To our ears, accustomed to several instruments simultaneously, the solo violin may sound sparse. Give it time; this work is both simple (in terms of one lone instrument) and complex (in terms of what is actually being played). I think it’s beautiful.