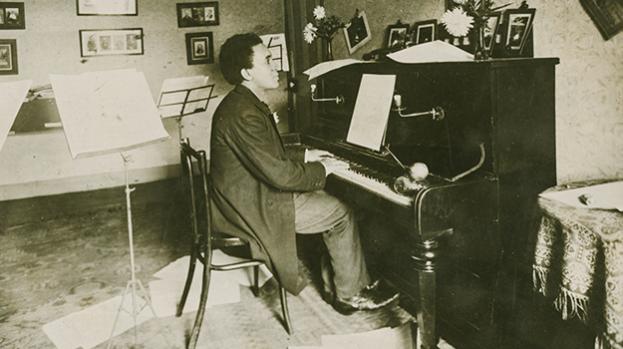 Samuel Coleridge-Taylor was an English composer and conductor who achieved enough success to be referred to as the “African Mahler” in New York City when he toured the US in the early 1900s. He grew up with a physician father from Sierra Leone, and an English mother. His father returned to Sierra Leone, not knowing a baby was on the way, and his mother lived with her father’s family to raise Samuel.

Coleridge-Taylor’s family members were musical and Samuel studied music and earned a reputation as a composer – enough to garner the attention of Edward Elgar, who was his champion. During a tour of the States, Coleridge-Taylor explored his father’s background; his father was a descendant of African American slaves who were freed by the British and evacuated from the colonies. Some moved to Sierra Leone. During one of these tours, Samuel was received by President Roosevelt at the White House, a rare event for a person of African descent. Coleridge-Taylor was interested in doing with African music what Brahms did with Hungarian music, and Dvorak with Bohemian music – incorporate folk tunes into classical music forms.

Along with his musical legacy, Coleridge-Taylor’s unfortunate circumstances caused wide awareness about composers being unfairly compensated. His popular “Hiawatha’s Wedding Fest” sold hundreds of thousands of copies, but he sold the music outright for 15 guineas. He learned to retain his rights and earn royalties after that, though he died young, at age 37 brought on by pneumonia, which many believe was worsened by his financial stress. The success of this work, and that his family left behind did not benefit at all, lead to reforms in England about how composers were to benefit directly from sales of their compositions.