Judging scandals forced the resignation of this closed-minded composer … 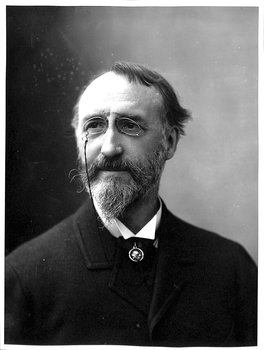 Theodore Dubois was a French composer, organist, and music teacher who wrote many religious works, hoped for a bigger career as an opera composer, and composed ballets, oratorios, and symphonies. Occasionally his “The Seven Last Words of Christ” and Toccata in G for Organ are still performed.

Dubois was director of the Paris Conservatoire who resigned under somewhat controversial circumstances. Two months before the Prix de Rome (a prestigious French scholarship awarded to arts students to live and study in Rome) was to be awarded, Dubois – himself a recipient – was embroiled in a judging scandal, not unlike the kind that plagued figure in the late 90’s and early 00’s.

Maurice Ravel applied for the Prix five times. Previous winners include Berlioz, Gounod, Bizet, Massenet, and Debussy. On Ravel’s second attempt, he won 2nd Prize. The third and fourth tries didn’t pan out; the judges wondered if Ravel was mocking the process with his overly academically-inclined works. On his fifth try, in 1905, Ravel’s elimination in the first round caused a kerfuffle. Meanwhile, all of a juror’s students made the final round. Even Ravel’s critics found this unacceptable, and Dubois, who was involved in the administration of the Prix de Rome, took “early retirement”. Gabriel Faure replaced him. Dubois was against anything new or revolutionary; he actually forbade Conservatoire students from attending the premiere of Debussy’s opera Pélleas et Mélisande. Ravel, bless his heart, attended all fourteen performances.

The Exultate Festival Choir and Orchestra performs the Introduction to “The Seven Last Words of Christ”.