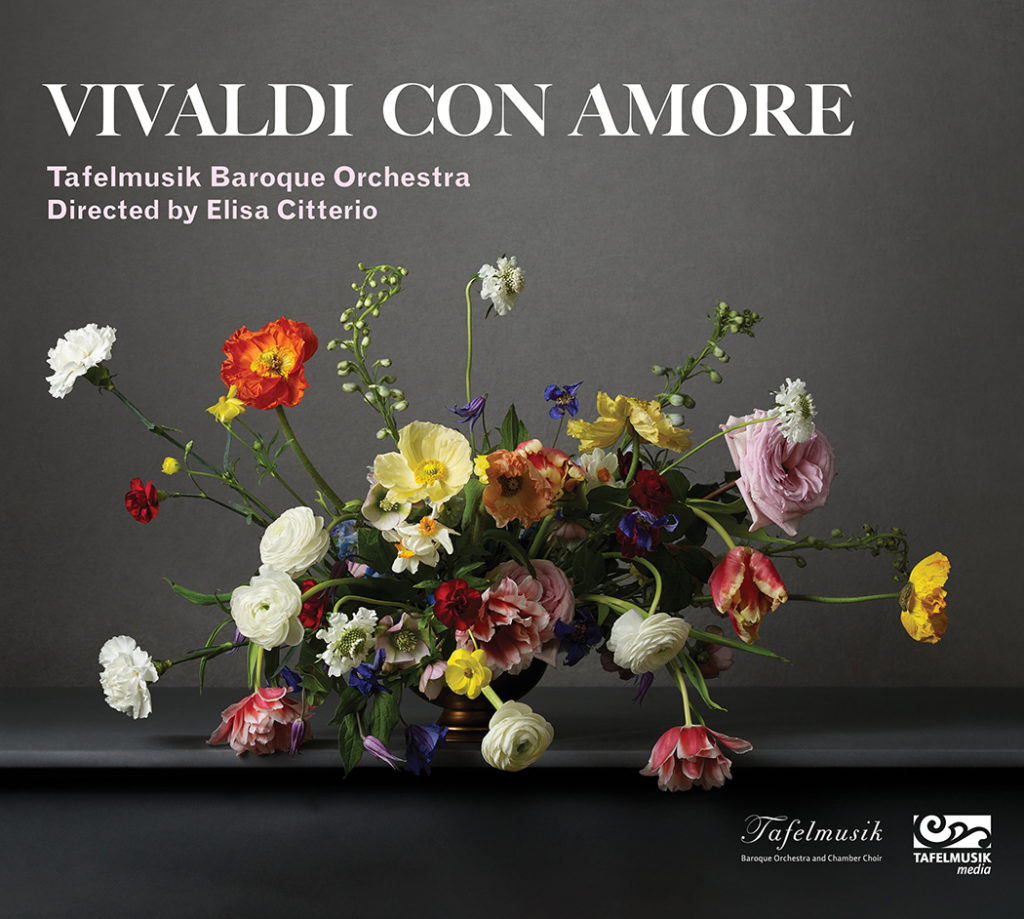 Tafelmusik is releasing “Vivaldi con amore” tomorrow, its first recording with Music Director and violinist Elisa Citterio. Elisa, born in Brescia, Italy, is an experienced performer and recording artist, having appeared on 50 recordings previously, but this one is special to Tafelmusik fans, as it’s her first with the beloved Baroque ensemble. The recording is fresh, upbeat, and lyrical – everything you’d want in a Vivaldi recording. I lobbed a few question over to her, as well a couple of featured members of the ensemble of Italian heritage to get their perspective on one of Italy’s most famous composers.

How long with Tafelmusik:
Since 2017

Please tell us what is important to Italians when it comes to music-making, and any traditions that you brought with you from your home country to Toronto.
For Italians, the most important part of music-making is the emotion, the synergy, the connection that the musicians experience on stage, and also the feelings that the music evokes during rehearsals and concerts. For this reason, the performances can all be quite different from each other.
Italian musicians, unlike their Canadian counterparts, tend not to arrive at rehearsals being extremely well prepared with marked parts, etc., even if they like to have that information. They tend to leave more to the last minute.

Let’s talk about the recording, your first with Tafelmusik – congratulazioni! You are directing and playing throughout this album, and you’re soloist in two love-themed works: the Concerto for violin in C Minor, “Amato bene”, and Concerto for violin in E Major, “L’amoroso”. Here’s what you said about Vivaldi: “In the collective imagination Vivaldi truly represents ‘l’italianità,’ or the Italian character. His music describes and evokes landscapes, states of mind, and characters in a very direct way. Vivaldi’s music speaks unambiguously to people’s hearts.”
How did you come to have such a close relationship with his music?
I’ve worked in many different places in Italy — La Scala, small baroque ensembles – and all of them have very different realities, especially La Scala, which is very strong in keeping Italian traditions alive. My time there helped me to understand how, in a certain sense, our instruments ultimately serve the human voice, which has been the queen of all instruments since the Renaissance. I learned how important it is for a baroque player, especially, to get as close to the sound of the human voice as possible – the articulation of the spoken language – and to convey instrumental music as if it were being sung. I bring this vocal aspect of music-making to my work with Tafelmusik. Also, together we are exploring and developing more of a sense of risk-taking on stage during concerts, which is a bit different than what Canadians might be used to.

I started playing Vivaldi’s music very early on, along with Bach’s music. I think the first piece was a violin sonata by Vivaldi, and soon afterwards I started playing his music with small ensembles. One of my first concerts as a violin soloist was performing the Four Seasons in Prague at the age of sixteen. That was a big commitment for me at that age, and it took me a lot of energy and concentration. I was very nervous and spent quite a lot of time with this music. That’s when I really started to love it.

For a new audience member who’s not familiar with Vivaldi’s music: if you compared Vivaldi’s music to something else (weather, a flower, an animal, a food, a wine) … what would it be, and why?
For me, Vivaldi’s music is like a changing landscape. It’s easy to compare his music with the changing of the seasons, not only because of his most famous work, but because you can see and hear all the different colours of the landscape as its changed by the seasons – cool white in winter, hot summer tones, the sweet shades of spring, etc. This palette is endless because nature provides us with an endless supply of colours, textures, and sounds as well. This is something that I always think about when I approach Vivaldi’s music.

How long with Tafelmusik:
Since 2002

Mention “Vivaldi” and people immediately think of Four Seasons. Can you briefly summarize the other kinds of music he wrote, and whether you’ve played any of them?
Vivaldi was an innovator in Baroque music and he was influential across Europe during his lifetime. As a composer, virtuoso violinist, teacher and priest, his life and genius influenced a number of notable European artists. The “Four Seasons” that we all know, was also enormously successful during Vivaldi’s time.

Since you were born in Vicenza, Italy, what influence has Italian culture had on your own upbringing?
I grew up in Italy playing music by Vivaldi! One of the most performed pieces is Vivaldi’s Gloria, which has a nice aria scored for soprano and oboe obbligato. I’ve played that piece many times!

Let’s talk about the recording. You’re featured as a soloist in the Concerto for 2 oboes and 2 violins in D Major. Is preparing for a recording the same as preparing for a concert? Is it equally fun, stressful, etc.?
I personally enjoy recording. Recording gives musicians the opportunity to perfect the music and to go deep into the details and create something that will last… forever!

What do you think people least know about Italian culture?
Did you know that Italy is experiencing a huge growth in its mechanical and engineering industry, exporting to the USA ahead of Germany, France and the UK? Of course we’re talking about food technologies: machinery and systems for pasta and extruded food products; machinery and ovens for bread, biscuits, pastry and pizza; espresso coffee-making machines, slicers, meat mincers, and related machinery. “Great Technologies for Great Food” is the motto! So many Italian firms boast technologies and innovative products that can support the tradition of Italian cuisine and the export of all its tastes and flavours around the world.

How long with Tafelmusik:
Since 2001

Mention “Vivaldi” and people immediately think of Four Seasons. Can you briefly summarize the other kinds of music he wrote, and whether you’ve played any of them?
Vivaldi wrote an incredible amount of music in many different genres including concertos, chamber music, sacred music and opera. His over 500 concerti feature an amazing variety of solo instruments as well as lots of interesting combinations of multiple instruments. After the violin, Vivaldi wrote the greatest number of solo concertos for the bassoon – almost 40! I never cease to be amazed at the invention and ingenuity on display in these works.

Your family originated from Italy. What kind of influence has Italian culture had on your own upbringing?
My great-grandfather’s family emigrated to the US and Canada in the early 20th century from Sicily and Calabria. My dad grew up in Portland, Oregon and coincidentally another branch of our family settled in Toronto! Growing up I spent time every summer with my grandparents in Portland. My grandfather was in fresh fruit and vegetable distribution, a very common business for Italian Americans. I have lots of childhood memories of large Sunday family gatherings always centered around food. Even though my father’s generation had little contact with family members back in Italy (I can only remember having visitors from the old country at our house once or twice when I was very young), we guarded a very strong identity as Italian Americans which primarily manifested itself in food and loud talking.

Let’s talk about the recording. You’re featured as a soloist in the Concerto for bassoon in D Minor, RV 481. Is preparing for a recording the same as preparing for a concert? Is it equally fun, stressful, etc.?
I love to record. It forces you to focus on all aspects your playing at an extremely detailed level. You have to think about everything from technical issues to musical choices that you will have to live with for a long time. Everything is put under a microscope and intensely examined. I always learn so much as a musician through this process.

How long with Tafelmusik:
Since 2004

Mention “Vivaldi” and people immediately think of Four Seasons. Can you briefly summarize the other kinds of music he wrote, and whether you’ve played any of them?
Vivaldi is justly famous for his instrumental works (concertos and sonatas), and for certain vocal pieces like the Gloria which is sung by many choirs. More and more singers are discovering his cantatas. I’ve played a couple of his operas and oratorios which perhaps represent his most amazing work. He was a great text setter but his real genius is in the way he combines voices and instruments.

Your grandparents hail from Italy. What kind of influence has Italian culture had on your own upbringing?
My maternal grandparents emigrated from Calabria in the 1930’s. I’m afraid that by the time I was born in the 1970’s a lot of the Italian influence had been diluted. None of my relatives wanted to speak Italian around me because they wanted to fit into their new society and also perhaps felt shame in speaking their dialect. I had to study the Italian language on my own and learned more about Italians during the year I studied music in Milan and over the past decade working with wonderful Italian musicians. I will say that I picked up a few recipes from my Italian grandmother (including gnocchi) and that Italian cuisine is my favourite both to cook and eat.

Let’s talk about the recording. You’re featured as a soloist in the Concerto for Lute in D+. Is preparing for a recording the same as preparing for a concert? Is it equally fun, stressful, etc.?
I absolutely love the focus that recording brings. I wouldn’t call it “fun,” but you can see it as a cool opportunity to work hard and try to get every bar just right. Due to time constraints it can also be stressful, so it’s important to have the right team of musicians/engineers/producers that works together well (the chemistry was excellent during the Tafelmusik Vivaldi sessions). Most musicians have been in sessions where somebody has lost their composure.

What do you think people least know about Italian culture?
One thing that drives me crazy are guided tours in Italy for tourists where you learn about inventions by Leonardo, paintings by Michelangelo, sculptures by Bernini, architecture by Brunelleschi, literature by Dante, and music by . . . PUCCINI!!! Don’t the tour guides know that the Italian Renaissance produced some of the greatest music ever? Orlando di Lasso, Giovanni da Palestrina, Luca Marenzio, Carlo Gesualdo . . . ???? I wish more people knew of lute composers such as Francesco da Milano, Giovanni Antonio Terzi, or Marco dall’Aquila. Also, there was a huge surge in the number of published women composers in Italy around the late Renaissance and into the Baroque, such as Maddalena Casulana, Vittoria & Raffaella Aleotti, Chiara Margherita Cozzolani, Barbara Strozzi, Maria Francesca Nascimbeni.

Vivadi con amore is available for pre-sale now by clicking here.
The album drops tomorrow (Friday, September 20, 2019) and will be available at Tafelmusik concerts, retail stores, and digital platforms as well.