Two co-hosts, two opinions: what to wear to a classical concert. A casual guy and opera singer dish! 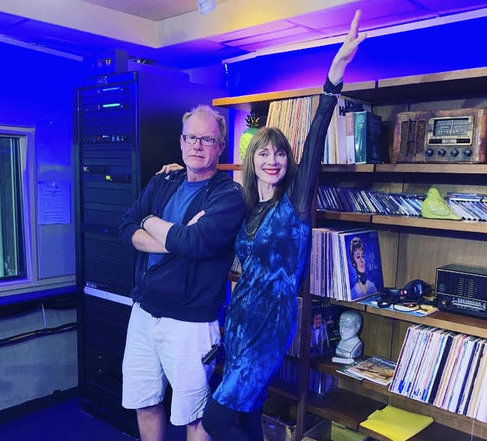 As a classical concert go-er, and someone whose side hustle is styling classical musicians for photo shoots, I’m always curious to see what people are wearing at concerts, whether they’re performing or audience-ing. The stereotype of tuxes and gowns is still prevalent due to how classical concerts are depicted in film and television. Remember Frasier? The Crane boys always headed out to the symphony or opera in tuxes. Most folks attend concerts in office-appropriate or casual smart attire; I’ve also seen folks wearing sports jerseys and cargo shorts. I decided to ask our “Classical Morning” co-hosts Mike Duncan (who dresses very casually) and Jean Stilwell (an opera singer who’s worn a gown or two) what they think about classical concerts and apparel. I found the dichotomy of their responses amusing.

When you go to a classical concert, do you expect the performers to be dressed up? How about for any other type of music?
Mike: No. I expect performers to dress in however they choose; being comfortable in how you wish to express yourself. Being relaxed leads to better performances in my opinion – regardless of the genre.
Jean: Everything depends on the nature of the concert. If they’re performing an oratorio (when opera singers stand in front of an orchestra), I expect to see long gowns and tuxes … unless it’s been staged and there are costumes involved. As long as the story is being honoured, I enjoy traditional and new ideas. For example, if the piece being performed is Mahler, I would wear something sombre, particularly if it’s Kindertotenlieder (Songs on the Death of Children). I often wear a gown that I feel communicates the story. On several occasions I have sought out designers with ideas for a gown for specific repertoire. For a concert performance of Carmen I wore a form fitting dress in black and red with a lot of fabric at the bottom to pick up and use for dramatic purposes. It’s also a lot of fun. Plus, I ask the Administrator of the organization what gown I wore the last time I sang with the orchestra. I make sure that I don’t wear the same gown that I previously wore.

Do you think audiences should dress up for concerts? Why or why not?
What about you, personally? Do you dress up?
Mike: No, I do not. I once had an on-line debate with a rather pompous newspaper columnist about this many years ago. My rationale is this: You paid the money – you should be able to attend in the clothing of your choice. Now that being said, you’re not going to wear a Speedo to the opera – it should be within reasonable bounds; but if I’m going out, I can vary from jeans and a sports coat to a full suit. Sometimes it’s fun to dress up, but I personally don’t feel any pressure to do so. I think any preconceived notions or traditions of dressing up for the symphony or what have you are incredibly superficial and frankly offensive. It’s elitist and unwelcoming.
Jean: I think audiences should wear whatever they like. I do, however, feel that it is important to respect the performance and the venue. I particularly enjoy watching what people wear ie, I once saw a young couple attending the opera for the first time. They wore such finery and had clearly thought about what they should wear – they looked beautiful. I see more people wearing jeans these days but I never see anyone looking slovenly. I make sure that I am not distracting to the artists. If the house is in black then exceptions can be made. Never ever wear a hat. Consider the people around you and how well they can see.

You receive an invitation to a formal, black tie event. Your reaction would be ……… ?
Mike: “No thank you”. It’s too phony for me personally.
Jean: I will dress up as need be. Many black tie events are fundraisers, so I will do whatever is requested of me in the invitation. I respect and respond to almost anything if it will help to raise money for a good cause. The black tie events that I attended were usually receptions. It was important to me to dress up if I was there to entertain on behalf of the organization. It’s still a performance of a sort. The people in attendance were fundraisers and PR people, the press and especially donors. I thanked people who contributed in any way to the organization for whom I was performing. Big-time gratitude!

What would you say to a young millennial who’d like to attend a classical concert and aren’t sure about what to wear?
Mike: Wear whatever you damn well want. And for arts organizations who want young (or younger) people to attend their events – lighten up. Let them wear what they want. Welcome them. Don’t hold them to some out-dated and ridiculous notion that you can only enjoy something by the clothing you wear. That is so pretentious and elitist.
Jean: I would say to them to wear whatever they would like. I would instruct them as to what they might expect and let them choose whatever they would be most comfortable wearing.

Liz Parker is the Digital Content Editor for The New Classical FM. She’s also a piano teacher and occasional stylist. She dresses up for concerts. [email protected]