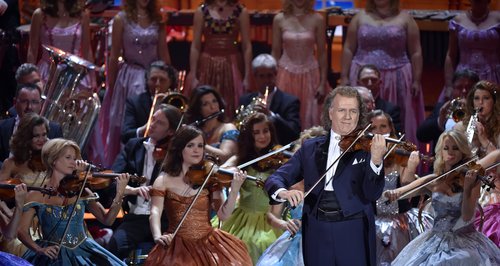 You’ve heard and seen the ads for arenas everywhere – a very tall long-haired gentleman, dressed in 19th century costume, playing waltz on the violin with a gigantic orchestra behind him, with all members of the orchestra decked out in ball gowns and tails. André Rieu, dubbed the modern-day “Waltz King”, has made a huge success out of the waltz form and his blend of standards and crossover music, selling out sports arenas and stadiums all over North America, South America, Europe, Australia, and Japan.

Rieu is a born showman and works the stage, engaging the audience to sing or dance. He also incorporates pop tunes into his shows, played by orchestra and sung by classically trained singers. At one time, Rieu was the world’s most successful male touring artist, according to Billboard magazine. He isn’t just the King of the Waltz; he is the Rock Star of the Waltz.

Look at this video! All the musicians are decked out in outfits resembling the Romantic era, and looks like a Disney animated movie come to life.  I’m totally expecting Cinderella to stumble upon the stage, drop a glass slipper, and scamper off.