What’s the top of the “Classical Chartz”? If you missed it, here’s the highlight. 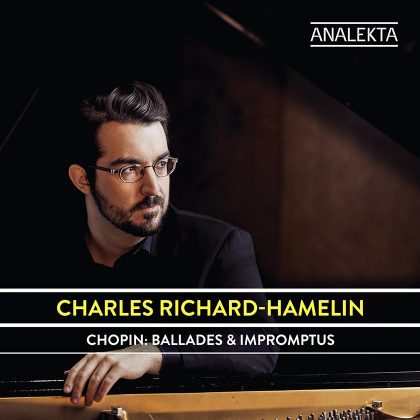 According to “Classical Chartz”, host Mike Duncan has declared the recording “Chopin: Ballades & Impromptus” by pianist Charles Richard-Hamelin to be the top of the charts.

What is a “ballade”? Well, in this context, it’s not a vocal piece in the style of Celine Dion. Chopin either borrowed the term from the  interludes during a ballet – ongoing music in between dance sets, or it was borrowed from a long-ago era of the “heroic ballad”, in which a story is being told, full of adventures and experiences.

Chopin wrote four ballades for piano, and every one of them is attractive, lyrical, and full of technical show-offery. Canadian pianist, Charles Richard-Hamelin, released “Chopin: Ballades & Impromptus” and here’s the fourth, considered the most difficult. I love English pianist John Ogden’s quote about this ballade: “It is the most exalted, intense, and sublimely powerful of all Chopin’s compositions … It is unbelievable that it lasts only twelve minutes, for it contains the experience of a lifetime.”