The King of Ragtime: Scott Joplin 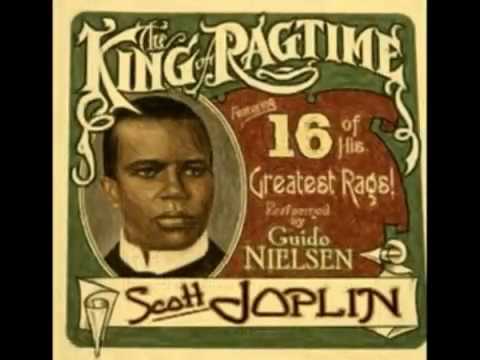 Ragtime isn’t classical music, obviously, but from time to time, a classical pianist will play a ragtime as part of a recital or as an encore after a big concerto appearance.

Scott Joplin, the “King of Ragtime”, wrote 44 original ragtime pieces, a ballet, and two operas. His best-known work, “Maple Leaf Rag” became the first bonafide hit in the genre, and is considered the archetypal rag. Joplin attended the World’s Fair in Chicago of 1893, an event that made the ragtime a national craze by 1897. This set the stage for Joplin, who put out “Maple Leaf Rag” in 1899 which made him famous across the country. “Maple Leaf Rag” set the bar high in terms of how a ragtime should sound, and most composers tried to emulate the style. It was a hit, climbing the charts at radio stations. If he had a contract that rewarded him for every sale of the sheet music, it would have covered his expenses for life. He did receive some ongoing income from the sales of the piece, but still had financial struggles.

Scott Joplin foreshadowed Gershwin, both “legitimizing” their music. Long before Gershwin “made a lady out of jazz” with classical forms, Joplin elevated the ragtime form as something beyond its “cheap bordello” origins and wrote classical-style miniatures, incorporating Afro-American syncopated rhythms, layered melodies, and colourful tunes. Here’s Lang Lang, who recorded Maple Leaf Rag. Instead of playing it straight, he swings the rhythm, meaning the flow of notes are short-long, short-long. What do you think?