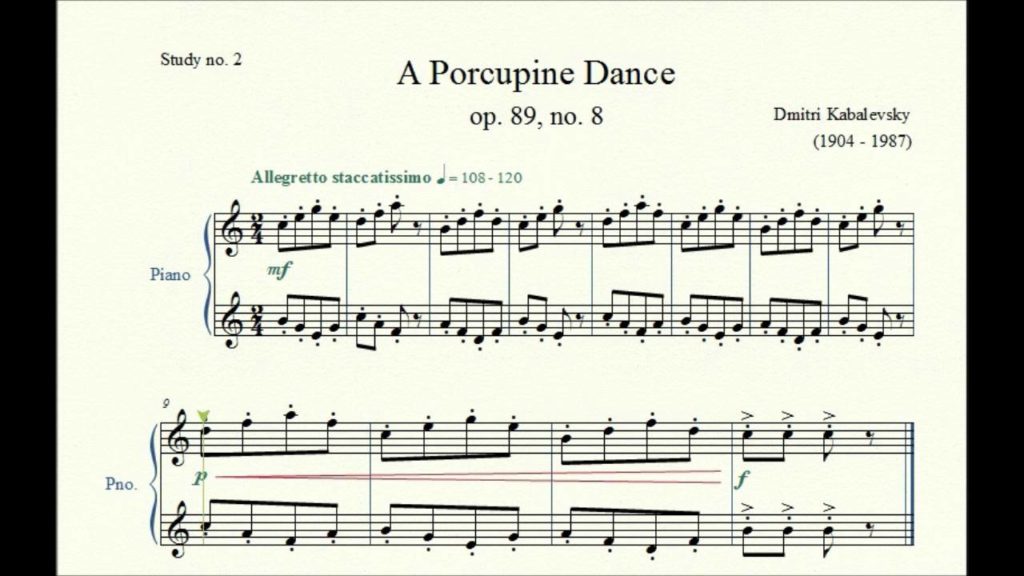 Dimitry Kabalevsky is a composer many piano students would recognize – he wrote countless little pieces that show up in Canada’s Royal Conservatory of Music’s repertoire books from about grade 3 on up, often with descriptive titles like “Clowns”, ”A Little Joke”, “Toccatina”, “A Little Song”, and countless studies. Unlike Czerny, who composed lots of un-thrilling studies that just droned on and on, Kabalevsky’s music was fun to learn and play, filled with attractive melodies.

Kabalevsky’s music didn’t quite reach the standard of Prokofiev or Shostakovich and isn’t commonly part of the standard repertoire of symphonies, chamber musicians, or soloists. Once in a while you’ll see his orchestral work “The Comedians” programmed, or his Piano Concerto No. 3. His biggest legacy is his contribution to music education, and connecting kids to music. He wrote music specifically to link that stage in a piano student’s studies when they’re approaching the advanced stage, focussing on the technical skills needed to sound more sophisticated at a professional level.

Kabavlevsky also set up music education programs in 25 Soviet schools, and even taught seven year-olds how to listen attentively and put their reactions down into words. He wrote about this project, which was turned into a published report in the United States a year after he died.

This piece, “Dance on the Lawn” I learned when I was a child. I remember noticing the jumping pattern in the left hand, and how the notes were always in a triad formation. This piece sparked my interest in music analysis, an important tool in learning and memorizing music. I teach my own piano students the importance of analysis, right from the first year of study.

I’m so grateful for all the Kabalevsky pieces I learned growing up, including the delightful “Porcupine Dance” in the photo, which to this day, cracks me up, and is one of the pieces I still teach.