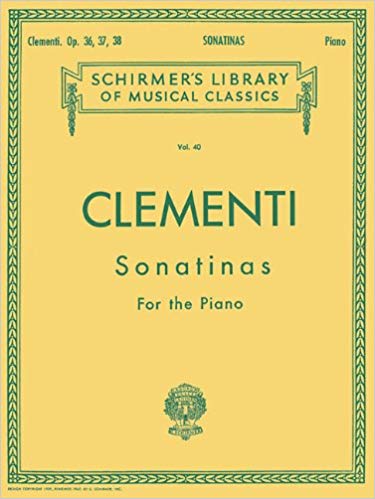 Muzio Clementi was an Italian-born composer who moved to England when he was 14 and remained there the rest of his life. Known as “Father of the Piano”, he was influenced by the keyboard mastery of Domenico Scarlatti, the classical school of Haydn, and the “stile galante” (galant style) of JC Bach. Clementi developed a fluent and technical legato style which made a competitor out of Mozart, and a disciple out of Beethoven. Along with his composing, he was an entrepreneur – he promoted his own brand of pianos (he made some significant improvements in the construction of the piano, which are standard today) and was a significant publisher (successful enough to live well). It’s no wonder many of his works are still played; dozens of piano pieces (sonatinas) and studies remain a staple of the Royal Conservatory’s piano repertoire books.

Clementi was also one of the first composers to truly take advantage of the piano’s capabilities, and incorporated more jumps and octaves and sudden contrasts in dynamics. Beethoven ran with that concept, thanks to Clementi’s example, and explored the piano’s range even further – lots of leaps, the hands moving farther apart on the keyboard – more than any composer previously – and using even more extremes in sudden shifts between loud and soft. Clementi was also a huge influence on Carl Czerny (another composer whose piano pieces and studies show up throughout a piano student’s education).

When Clementi died, he was buried in Westminster Abbey, where many great musicians, artists, and poets were buried before him and in the centuries to follow.

Any of us who studied piano are familiar with Clementi’s sonatinas – often colourful, like mini-operas for the keys. I thought it’d be neat to listen to some of his “grown up” works – his piano sonatas at the level of professional performers. They were recorded by no less than Vladimir Horowitz – who knew??