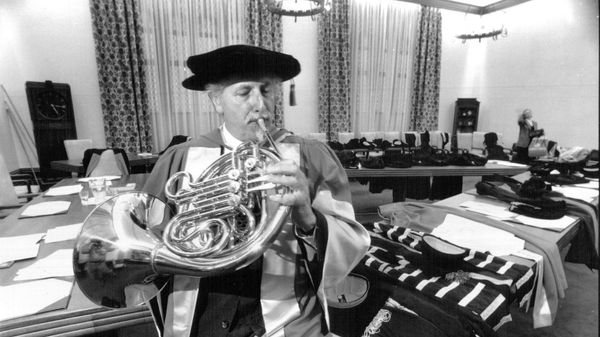 Barry Tuckwell, the legendary French horn player, passed away yesterday at the age of 88. After quickly moving up the orchestra ranks in Australia, he moved to England and did the same there.  He continued performing and giving master classes in England and the US.

Tuckwell was considered “the god of French horn” and is one of the very few to carve a solo career, when most hornists maintain an orchestra or teaching post and do the odd chamber or solo gig here and there. He toured and made some fifty recordings, receiving three Grammy nominations over the years.

My dad, the biggest classical music fan to ever walk the earth, told me about hearing Tuckwell either in recital or as a concerto soloist with the Vancouver Symphony, I can’t remember. For those who don’t know, performing the French horn is disgustingly difficult, and requires a notorious level of control. It’s SO easy to fluff a high note. My dad told me how Tuckwell completely blew a high note – there’s no way anyone could miss it. He stopped, pointed to the ceiling, and shrugged, as if to say, “I went for it – didn’t quite get there. All par for the course”, and carried on. It reminds me of the story I’ve heard about Maria Callas who missed a high note, stopped everything, and did it over and nailed it.