“Vivaldi: The Manchester Sonatas” has just been released and violinist Mark Fewer was here to chat about it

Violinist Mark Fewer dropped by “Classical Mornings” with Mike and Jean to talk about his new recording, “Vivaldi: Manchester Sonatas” with harpsichordist Hank Knox. The duo is the first Canadian musicians to record these works unearthed from a Manchester library in the UK back in 1973.

Mark is one of the coolest dudes in violin, playing various genres and speaking eloquently about them. He bandies about the terms “gut”, “HIP” (with definition), and the “new” Vivaldi …. and talks about the journey of these sonatas from Italy to England to the recording now available. Listen to the interview here:

Leaf Music is an independent recording label based in Halifax, specializing in classical music recordings by artists and composers from the Atlantic provinces. “Vivaldi: Manchester Sonatas” is distributed by Naxos of America and can be found in retail stores or available to download and stream. 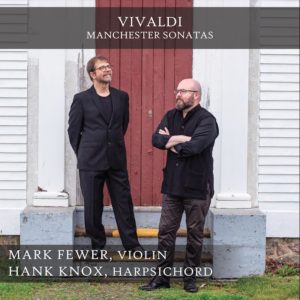