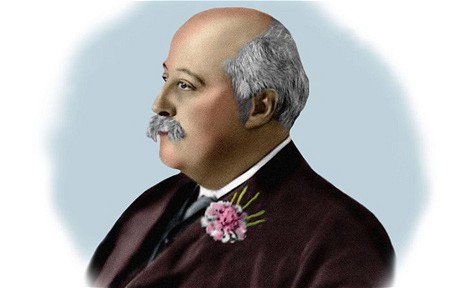 Hubert Parry isn’t widely regarded as a great composer; his academic career prevented from composing as much as he would have liked. Parry’s influence, though, on English composers was significant, such as Edward Elgar, who orchestrated Parry’s most famous work, “Jerusalem”. Famous pupils of Parry’s include Ralph Vaughan Williams, Gustav Holst, Frank Bridge, and John Ireland.

“Jerusalem” is an adaption of William Blake’s poem “And Did Those Feet in Ancient Time” as part of the Prophetic Books. The work, then written for organ and voices, was to be conducted by Parry’s former student Walford Davies in 1916, and Parry had some misgivings about the text. He didn’t want to deny his former student the gig, and handed the music over, saying “Here’s a tune for you, old chap. Do what you like with it.” A year later, the piece had grown enough in popularity with the Suffragette movement and Parry (a man ahead of his time) was delighted. He re-arranged the piece for orchestra for a Suffrage Demonstration Concert in 1918. The work, originally titled “And Did Those Feet in Ancient Time” became known as “Jerusalem”, Sir Edward Elgar’s arrangement is the version performed to this day, since gaining popularity at Last Night of the Proms concerts.

Have a listen to “Jerusalem” (which is followed by “God Save the Queen”), performed at Last Night of the Proms in 2012.