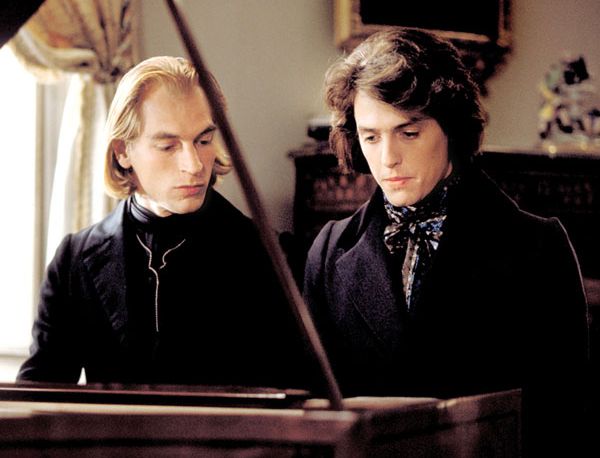 Julian Sands and Hugh Grant portraying Liszt and Chopin from the film, Impromptu

Today marks the birthday of Frederic Chopin. Chopin is not my favourite composer by a long stretch, but I am grateful I studied his music – both as a piano student (so many nocturnes and preludes) and later on, when studying music theory in university – and discovering how revolutionary his chord progressions were during his time.

Chopin, who fully developed the lyrical qualities of the piano,  and Franz Liszt, noted for pushing the technical boundaries, were close friends and mutually admiring, if not equally envious, of each other’s gifts. The 1991 film Impromptu depicted his life, and focussed on his romance with French writer George Sand (a woman who dressed in drag and took on a man’s name) and friendship with Liszt and writer Alfred de Musset.

A proud Polish nationalist, Chopin identified much more strongly with his native land and mother’s ancestry than his father’s French side, and many of his piano works incorporated traditional Polish themes, including Polonaises, mazurkas, sonatas, waltzes, etudes, impromptus, and scherzos. He also wrote two piano concertos, though the orchestra parts were weak by comparison to the piano writing.

One of the mostly proudly Polish pieces of music is the Polonaise in A flat major, dubbed the “Heroic”.  This performance was recorded by piano legend Vladimir Horowitz. Check out the left hand octaves at 3:24. They start out innocently enough, but grow with increasing power and “thunderousness” as the piece progresses.